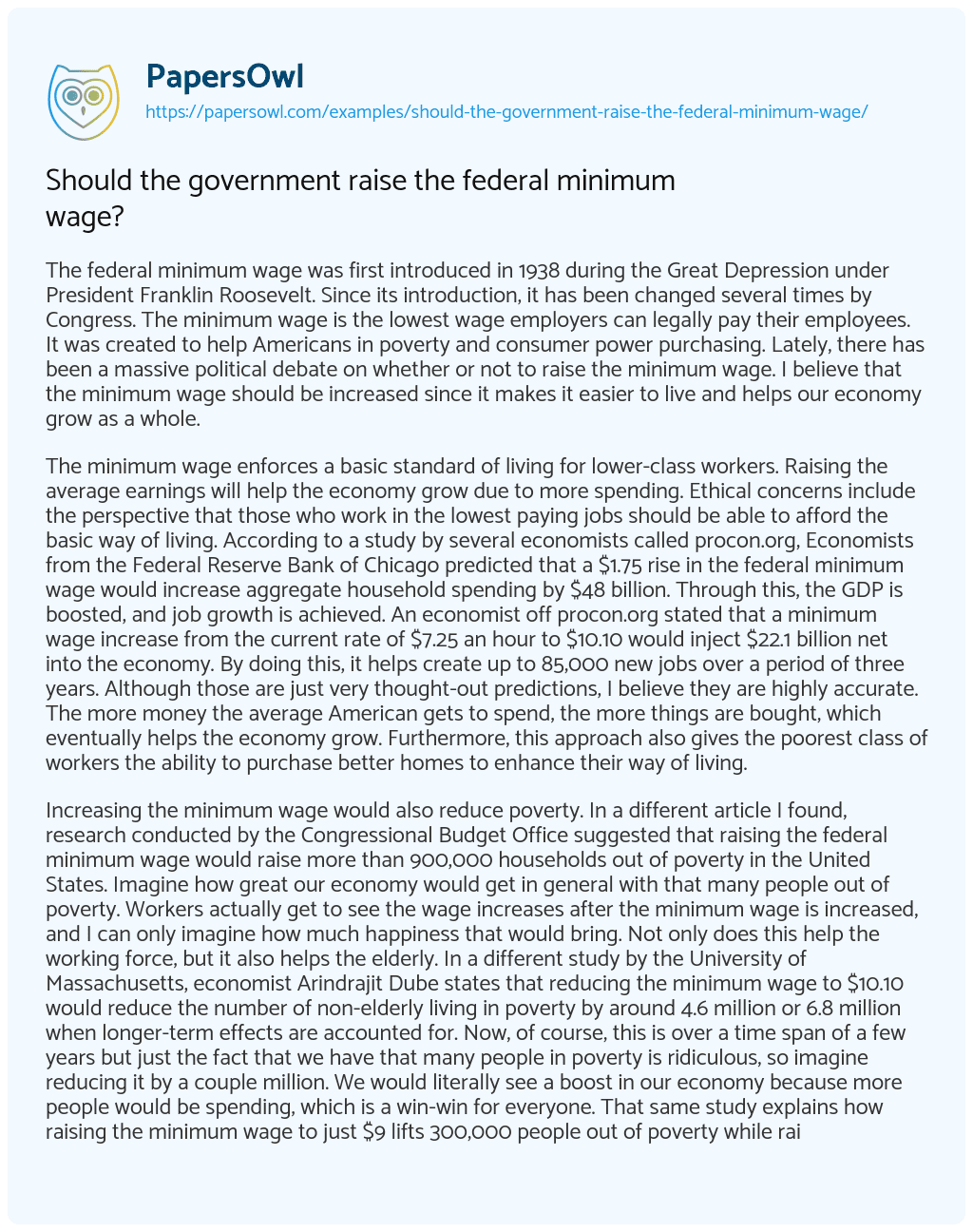 The federal minimum wage was first introduced in 1938 during the Great Depression under President Franklin Roosevelt. Since its introduction, it has been changed several times by Congress. The minimum wage is the lowest wage employers can legally pay their employees. It was created to help Americans in poverty and consumer power purchasing. Lately, there has been a massive political debate on whether or not to raise the minimum wage. I believe that the minimum wage should be increased since it makes it easier to live and helps our economy grow as a whole.

The minimum wage enforces a basic standard of living for lower-class workers. Raising the average earnings will help the economy grow due to more spending. Ethical concerns include the perspective that those who work in the lowest paying jobs should be able to afford the basic way of living. According to a study by several economists called procon.org, Economists from the Federal Reserve Bank of Chicago predicted that a $1.75 rise in the federal minimum wage would increase aggregate household spending by $48 billion. Through this, the GDP is boosted, and job growth is achieved. An economist off procon.org stated that a minimum wage increase from the current rate of $7.25 an hour to $10.10 would inject $22.1 billion net into the economy. By doing this, it helps create up to 85,000 new jobs over a period of three years. Although those are just very thought-out predictions, I believe they are highly accurate. The more money the average American gets to spend, the more things are bought, which eventually helps the economy grow. Furthermore, this approach also gives the poorest class of workers the ability to purchase better homes to enhance their way of living.

Increasing the minimum wage would also reduce poverty. In a different article I found, research conducted by the Congressional Budget Office suggested that raising the federal minimum wage would raise more than 900,000 households out of poverty in the United States. Imagine how great our economy would get in general with that many people out of poverty. Workers actually get to see the wage increases after the minimum wage is increased, and I can only imagine how much happiness that would bring. Not only does this help the working force, but it also helps the elderly. In a different study by the University of Massachusetts, economist Arindrajit Dube states that reducing the minimum wage to $10.10 would reduce the number of non-elderly living in poverty by around 4.6 million or 6.8 million when longer-term effects are accounted for. Now, of course, this is over a time span of a few years but just the fact that we have that many people in poverty is ridiculous, so imagine reducing it by a couple million. We would literally see a boost in our economy because more people would be spending, which is a win-win for everyone. That same study explains how raising the minimum wage to just $9 lifts 300,000 people out of poverty while raising it to $10.10 lifts 900,000 people out of poverty. With that being said, these are just predictions that I believe we should make into statistics in order to help enhance our economy.

Another benefit of increasing the minimum wage is that the government would reduce the spending on welfare programs. Think about it like this, when the current federal minimum wage leaves American workers under the poverty line, they have to do something to provide some aid for them. The first thing that these Americans do is look to the government for help to solve their problem. Luckily, the government has programs that get just what these people need. These benefits are meant to help the low-income workers because, without welfare, their families would struggle severely. After doing some research, I found an article by an EPI report stating that the American government could save $7.6 billion a year from these programs if they raised the minimum hourly wage to $10.10. These predictions to me are just really absurd because I do not understand why someone still has not done anything to change it even after all these research and studies. If the United States were to raise the minimum wage, so many Americans would be immediately pulled out of the poverty level and would no longer need assistance from the government. From a long-term perspective, the higher wages mean that the government would need to spend less on these programs and maybe even help us end up with lower taxes for the whole country.

Lastly, increasing the federal minimum wage would increase worker productivity. The reason is that when workers get paid livable wages, they get more involved in their work, put more effort into it, and enhance productivity. Increasing the minimum wage pushes workers to show how good workers they are and increase their productivity. After doing some research, I found a study by CEPR that states that if employees were paid what their productivity is worth, the minimum wage in 2012 should have reached $21.72. Can you imagine if the minimum wage being what it is now produced that much work productivity, how much harder they would work if they were earning more money? What’s even compelling is how much higher and quicker the work productivity would become for a few dollar raise. According to multiple economists, increases in wages are associated with increased productivity. In that same article, I found a quote by a professor of Economics in London, Alan Manning, stating that, As the minimum wage rises and work becomes more attractive, labor turnover rates and absenteeism tend to decline. For example, when a worker is very experienced, they tend to get the need to be paid more. If the employers fail to fulfill their demands, they feel the need to leave and find work where they can earn the desirable wages. This means that employers then have to spend money to train new workers, which can be highly expensive. If the minimum wage is raised, there is a better chance that the highly experienced workers would be retained, helping the company avoid spending on hiring new workers and minimizing the adverse effects that come with turnover rates. Not only does this convince the workers to stay, but their loyalty and productivity are increased. This is exciting because the employees’ increased effort increases the revenue in general. I am sure that is something all bosses would like to experience.

The minimum wage debate is a topic that will remain relevant in our society due to the impact it can do on individuals and the economy. Now, of course, there are cons to this topic, just as in any other debate, but people need to realize and understand that we will never find out how much of a difference this could actually do to our economy if we never enhance it. We are living in a life where money is literally being destroyed because we have too much of it. Instead of throwing it away, why can’t we just use it towards raising the minimum wage? Currently, the minimum wage here in Arkansas is $8.50, which has been steadily growing. Arkansas just recently approved a ballot to incrementally raise the minimum wage to $11 an hour by 2021, and I believe that this is exactly what the people wanted. By passing this ballot, the lives of many Arkansans will change, and I believe this is for the best.

Should the government raise the federal minimum wage?. (2020, Jan 09). Retrieved from https://papersowl.com/examples/should-the-government-raise-the-federal-minimum-wage/