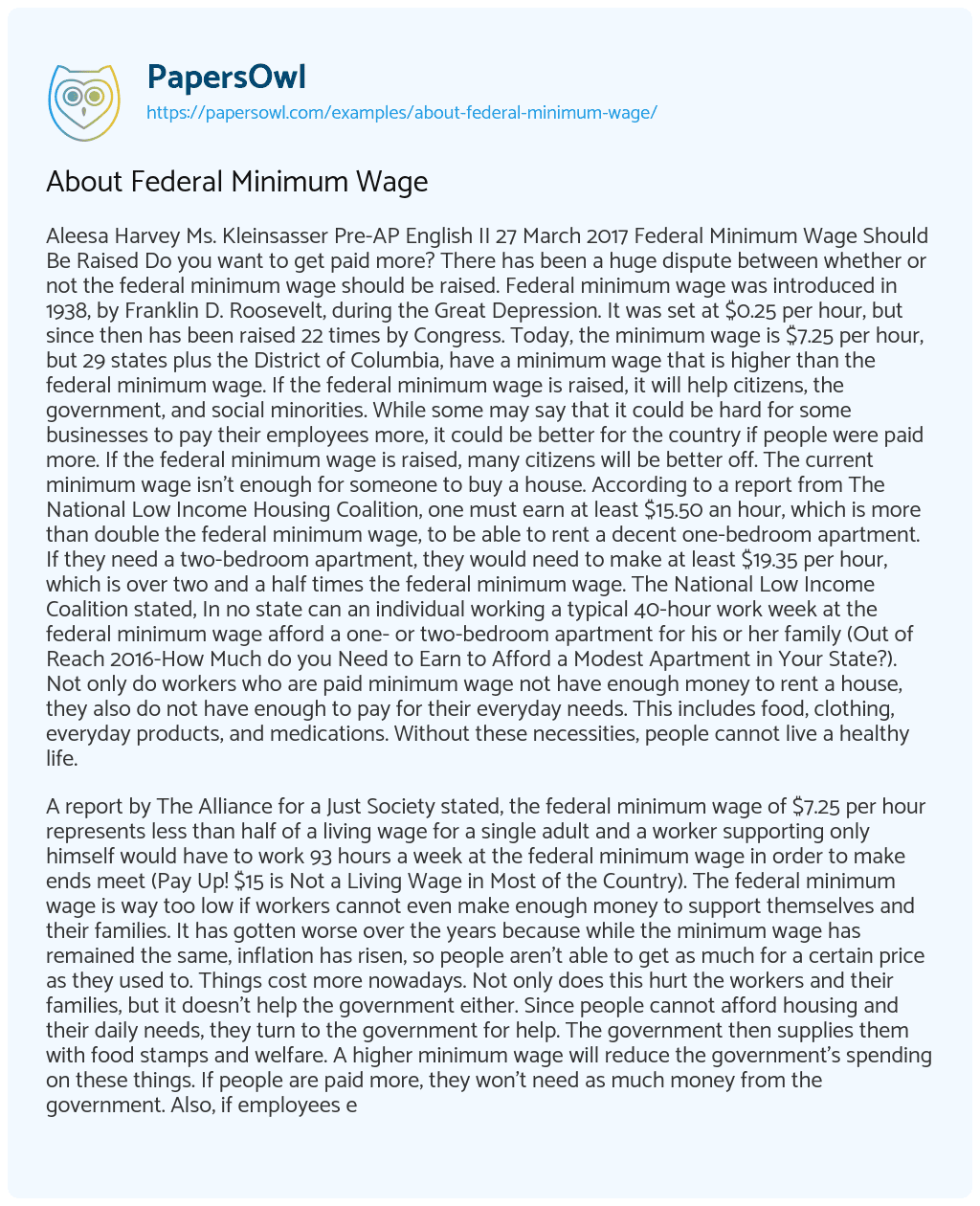 A report by The Alliance for a Just Society stated, the federal minimum wage of $7.25 per hour represents less than half of a living wage for a single adult and a worker supporting only himself would have to work 93 hours a week at the federal minimum wage in order to make ends meet (Pay Up! $15 is Not a Living Wage in Most of the Country). The federal minimum wage is way too low if workers cannot even make enough money to support themselves and their families. It has gotten worse over the years because while the minimum wage has remained the same, inflation has risen, so people aren’t able to get as much for a certain price as they used to. Things cost more nowadays. Not only does this hurt the workers and their families, but it doesn’t help the government either. Since people cannot afford housing and their daily needs, they turn to the government for help. The government then supplies them with food stamps and welfare. A higher minimum wage will reduce the government’s spending on these things. If people are paid more, they won’t need as much money from the government. Also, if employees earned more money, their eligibility for government benefits, such as food stamps, would decrease, along with their dependence on them. Raising the federal minimum wage could also help create more jobs, which would help the economy grow. The Economic Policy Institute has done research and suggests that the minimum wage be increased to $10.10 in three increments of $0.95. This way the jump wasn’t so dramatic. David Cooper, from The Economic Policy Institute, stated, our research shows that raising the federal minimum wage to $10.10 by 2016 would provide an additional $35 billion in wages over the phase-in period to directly and indirectly affected workers, who are likely to then spend that additional income. This projected rise in consumer spending would provide a modest boost to U.S. (David Cooper). This means that the more money the workers are paid, the more money they are likely to spend. This puts more money into the government. In the long-run, this would help both the employees, and the government. A raise in the federal minimum wage could also help reduce gender and race inequalities.

Among 34 of the countries that are members of Organisation for Economic Cooperation and Development (OECD), the United States has one of the highest amounts of income inequality. The only countries that have higher amounts of income equality are Mexico, Chile, and Turkey (OECD Income Distribution Database). Out of all the workers in the United States who are paid minimum wage, women make up about 62 percent of minimum wage workers. African Americans make up about 17 percent, and Hispanics make up about 21 percent of workers paid minimum wage. When comparing the median income of these groups to the national median income, it is very clear that these minorities make much less (OECD Income Distribution Database). In a time when the median income for women is 78% of the national median income, and African Americans and Hispanics make 67% and 79% of the median income respectively, increasing the minimum wage is necessary to create a more equitable income distribution for disadvantaged groups (Minimum wage-ProCon). This means that people who are paid minimum wage, which are typically people of the groups mentioned, arc paid much less than those paid a higher wage. This creates more of an equality between social classes. It can be argued that raising the federal minimum wage could hurt businesses. This would be because some businesses cannot afford to pay their employees more. This means that if those businesses are forced to pay their employees more, they may have to lay off others or reduce their hiring numbers. This could lead to more people becoming jobless. When the first minimum wage was established in 1938, at 25 cents, it caused significant amount of jobs loss. (Four Reasons not to Raise the Minimum Wage). While this could be true in some cases, raising the minimum wage could help more than it can hurt. Working so hard at a minimum wage job, trying to support oneself or family, can be physically harmful to someone’s health. John Komlos stated, in response to Donald Trump’s ideas about the topic, He should tell that to the woman who was working so hard to make ends meet that she died from fumes in her car while napping in between shifts. Hard work used to be a means of social mobility, but not anymore. Not on $7.25 hour (Column: Why Raising the Minimum Wage is Good Economics). This is an example of an extreme case, but there are many other ways that working so much just in order to feed one’s family can harm them.

Some Policymakers Are Proposing To Raise The Minimum Wage, But That Policy Would Be, Harmful. Research Shows Businesses Would Respond To The Increased Costs By Reducing, Employment, Particularly For Low-Skilled Workers. Some Businesses May Pass The Higher, and Costs On To Consumers. Despite The Hope Of Proponents, The Minimum Wage Does Little, If. Four Reasons Not to Raise the Minimum Wage (n.d.): n. pag. Web. Komlos, John. Column: Why Raising the Minimum Wage is Good Economics. PBS. Public Broadcasting Service, 15 Dec. 2015. Web. 03 Apr. 2017.