Why Minimum Wage should Increase 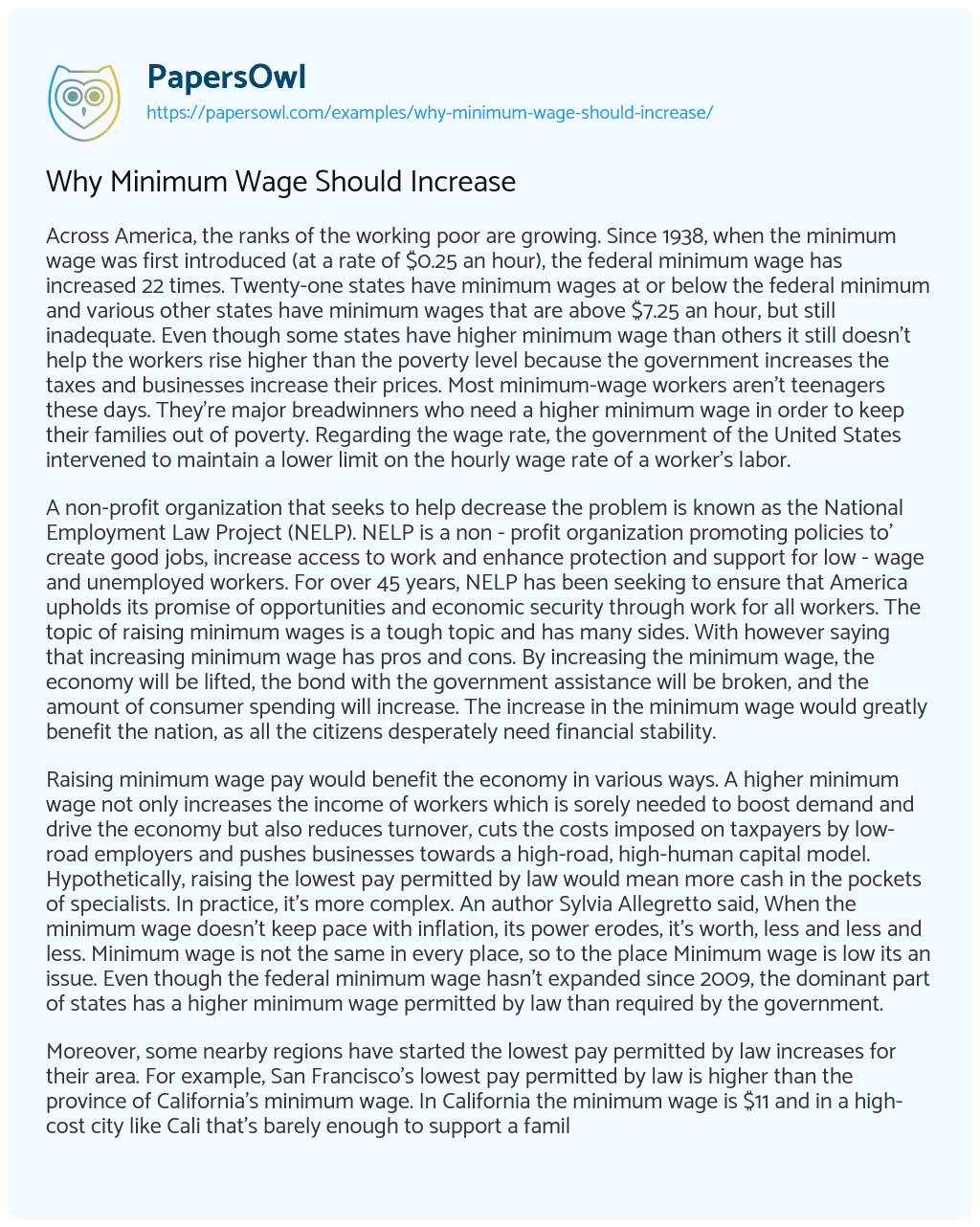 Across America, the ranks of the working poor are growing. Since 1938, when the minimum wage was first introduced (at a rate of $0.25 an hour), the federal minimum wage has increased 22 times. Twenty-one states have minimum wages at or below the federal minimum and various other states have minimum wages that are above $7.25 an hour, but still inadequate. Even though some states have higher minimum wage than others it still doesn’t help the workers rise higher than the poverty level because the government increases the taxes and businesses increase their prices. Most minimum-wage workers aren’t teenagers these days. They’re major breadwinners who need a higher minimum wage in order to keep their families out of poverty. Regarding the wage rate, the government of the United States intervened to maintain a lower limit on the hourly wage rate of a worker’s labor.

A non-profit organization that seeks to help decrease the problem is known as the National Employment Law Project (NELP). NELP is a non – profit organization promoting policies to’ create good jobs, increase access to work and enhance protection and support for low – wage and unemployed workers. For over 45 years, NELP has been seeking to ensure that America upholds its promise of opportunities and economic security through work for all workers. The topic of raising minimum wages is a tough topic and has many sides. With however saying that increasing minimum wage has pros and cons. By increasing the minimum wage, the economy will be lifted, the bond with the government assistance will be broken, and the amount of consumer spending will increase. The increase in the minimum wage would greatly benefit the nation, as all the citizens desperately need financial stability.

Raising minimum wage pay would benefit the economy in various ways. A higher minimum wage not only increases the income of workers which is sorely needed to boost demand and drive the economy but also reduces turnover, cuts the costs imposed on taxpayers by low-road employers and pushes businesses towards a high-road, high-human capital model. Hypothetically, raising the lowest pay permitted by law would mean more cash in the pockets of specialists. In practice, it’s more complex. An author Sylvia Allegretto said, When the minimum wage doesn’t keep pace with inflation, its power erodes, it’s worth, less and less and less. Minimum wage is not the same in every place, so to the place Minimum wage is low its an issue. Even though the federal minimum wage hasn’t expanded since 2009, the dominant part of states has a higher minimum wage permitted by law than required by the government.

Moreover, some nearby regions have started the lowest pay permitted by law increases for their area. For example, San Francisco’s lowest pay permitted by law is higher than the province of California’s minimum wage. In California the minimum wage is $11 and in a high-cost city like Cali that’s barely enough to support a family. The low minimum wage in some places is a result of the unfortunate ethos in America. NELP is an organization that is known which some of its articles get published by higher and most known sources like New York Times, The Atlantic, and CBS News which can be considered a reliable source. It displays various information regarding their research and issues minimum wage. Some issues that are displayed are issues that they are trying to improve the economy such as, leveraging public dollars to create good jobs and removing unfair employment barriers for people with records. With such a background and information, they provided its quite hard to refute their work and reliability.

Raising the minimum wage, most people won’t need assistances from the government. Which in this case will break the bond with the government assistances? By breaking the bond and rising costs of necessities such as child care, housing, and health care gives people the ability to achieve a modest but adequate standard of living requires. Government assists that working full time can help and bring an individual’s income higher. For many workers in certain sectors, wages are so low that even those who work full time must rely heavily on government assistance to make ends meet. This recommends low pay by numerous businesses encouraged by debilitated or lacking work measures, for example, a low the lowest pay permitted by law and obsolete extra time directions is setting outlandish requests on open assets.

Raising wages among low-and center wage workers would all the while lift wages and decrease spending on open help programs. The legislature could then utilize these funds to support hostile to destitution endeavors or make new employment making ventures. Expanding the government, the lowest pay permitted by law is one basic way this could be accomplished however it isn’t the main way. Secondly on the appeal list is logical (logos), which is clearly represented throughout the whole article. As stated before, he claims that he has done a lot of research into the timeline of minimum wage and can predict not fully, but a good idea of how it would affect the economy of the United States. He provides examples as to why twelve dollars is more reasonable by comparing it to other countries like Britain. He uses an example from the past, in 1992 when the minimum wage was increased in New Jersey by a smaller amount, fast-food job growth was just as strong as restaurants in its bordering state Pennsylvania which had New Jersey’s old minimum wage. All his research and examples provide a steady pattern which if continued would help the economy oppose a drastic increase in the national minimum wage increase. He even wraps up his argument with a simple economics principle. Economics is all about understanding trade-offs and risks. The trade-off is likely to become more severe, and the risk greater, if the minimum wage is set beyond the range studied in past research. Something that does not even require a whole lot of logic, he makes it seem like common sense.

Another benefit of raising the minimum wage pay will increase consumer spending. July 24 marked nine years since the federal minimum wage was last increased. A full-time job shouldn’t mean a life in poverty. The federal minimum wage amounts to just $15,080 a year for full-time work. Holly Sklar a CEO of Business for a Fair Minimum Wage said, Businesses rely on consumer spending and consumer spending depends heavily on wages. The minimum wage sets the floor under worker pay millions of workers have paychecks above the inadequate minimum wage, but still too low to make ends meet. Some businesses, from small and medium-sized operations to major corporations like Ikea, Costco, Facebook, and Amalgamated Bank have taken steps to raise their wages well above the required minimum level. Pathos is used when it comes to how many people would even be helped, and what class would be left to suffer from it. Not only did I do research to back this up, but my own middle-class family was interviewed just to see how I would affect them by asking them about the wage increase. This was one of my emotionally charged approaches, and it worked on her. She started as a minimum wage worker and got capped at $18/hr. after working there since she was 18 years old, and now she is in her early forties. If the minimum wage increases, her wage won’t because she already did the most she can make, which got her to think it would be unfair that others would easily make almost as much who just started their job there.

My second would be people being cut hours or easily fired due to budgets needing to be made. It happens in minimum wage jobs where workers wouldn’t be paid for the same hours, which may cause anger. Imagine being cut hours so you wouldn’t even be paid that much, let alone being laid off over it. This topic is one that I am making partially emotionally charged in order to invoke the part of the audience that DOES work, or people who agree that there would be issues regarding the middle class. I want them to feel angered or sad on the subject despite the factor there are people in poverty, but I want them to do so in a way that they come to understanding our minimum wage shouldn’t be completely set to $15-over 50% of their pay right now without any raises or assistance they may have. Ethically, the debate over the topic is important since there is a portion of workers barely even getting by, and the right thing to do in many other’s minds would be to increase it to meet the costs of living.

The statements above make for good reasons to change the minimum wages. Increasing the minimum wage, the economy will be lifted, the bond with the government assistance will be broken, and the amount of consumer spending will increase. As stated before, minimum wages were not supposed to be a permanent job solution for Americans. There are situations that some of these people have faced that does not give them opportunities to go to college and find better employment. A few reasons could be having a record as a teenager, disabilities, and people being in a situation where they can’t wait for employment, they must take what they can get. To some these might be excuses and they may be, but the point is that they are doing their best to support their families. A person that is putting to work hard at least needs the governments’ help by giving them a chance to make it. NELP is a non – profit organization promoting policies to’ create good jobs, increase access to work and enhance protection and support for low – wage and unemployed workers. To get across their argument and share it with the world they used pathos, ethos, and logos.

The non-profit organization NELP effectively creates their argument using rhetorical appeals and strategies throughout their research and experiments and results in a persuasive piece in favor of raising the minimum wage. Should the minimum wage be raised to $15.00 an hour? That’s excessive. The point is to help the lower-income families get back on their feet, not destroy the economy. A bonus for the government, raising the minimum wage they can get more people off welfare. More people making a living on their own, this must be good for the economy. Raising minimum wage benefits everyone involved; the government, the economy, and the families.

Why Minimum Wage Should Increase. (2019, Jun 14). Retrieved from https://papersowl.com/examples/why-minimum-wage-should-increase/