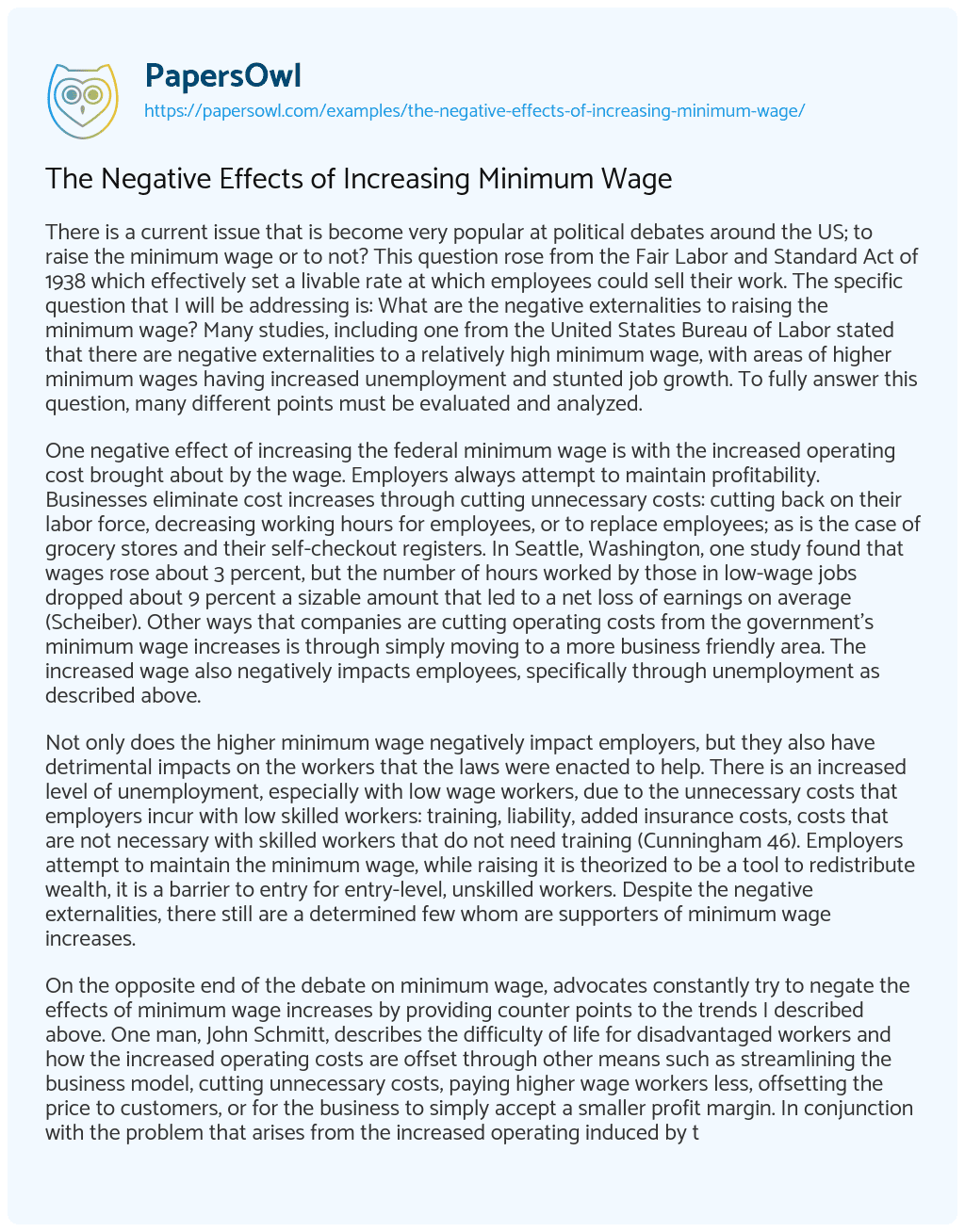 There is a current issue that is become very popular at political debates around the US; to raise the minimum wage or to not? This question rose from the Fair Labor and Standard Act of 1938 which effectively set a livable rate at which employees could sell their work. The specific question that I will be addressing is: What are the negative externalities to raising the minimum wage? Many studies, including one from the United States Bureau of Labor stated that there are negative externalities to a relatively high minimum wage, with areas of higher minimum wages having increased unemployment and stunted job growth. To fully answer this question, many different points must be evaluated and analyzed.

One negative effect of increasing the federal minimum wage is with the increased operating cost brought about by the wage. Employers always attempt to maintain profitability. Businesses eliminate cost increases through cutting unnecessary costs: cutting back on their labor force, decreasing working hours for employees, or to replace employees; as is the case of grocery stores and their self-checkout registers. In Seattle, Washington, one study found that wages rose about 3 percent, but the number of hours worked by those in low-wage jobs dropped about 9 percent a sizable amount that led to a net loss of earnings on average (Scheiber). Other ways that companies are cutting operating costs from the government’s minimum wage increases is through simply moving to a more business friendly area. The increased wage also negatively impacts employees, specifically through unemployment as described above.

Not only does the higher minimum wage negatively impact employers, but they also have detrimental impacts on the workers that the laws were enacted to help. There is an increased level of unemployment, especially with low wage workers, due to the unnecessary costs that employers incur with low skilled workers: training, liability, added insurance costs, costs that are not necessary with skilled workers that do not need training (Cunningham 46). Employers attempt to maintain the minimum wage, while raising it is theorized to be a tool to redistribute wealth, it is a barrier to entry for entry-level, unskilled workers. Despite the negative externalities, there still are a determined few whom are supporters of minimum wage increases.

On the opposite end of the debate on minimum wage, advocates constantly try to negate the effects of minimum wage increases by providing counter points to the trends I described above. One man, John Schmitt, describes the difficulty of life for disadvantaged workers and how the increased operating costs are offset through other means such as streamlining the business model, cutting unnecessary costs, paying higher wage workers less, offsetting the price to customers, or for the business to simply accept a smaller profit margin. In conjunction with the problem that arises from the increased operating induced by the wage increase, there are some unforeseen incentives that are derived for employers. Stated in John Schmitt’s text, as the price of operating a business becomes too costly, it becomes necessary for businesses to conserve revenue through all available means. To conserve capital, employers streamline businesses, cutting costs deemed unnecessary; it is an artificial way to create stronger, more efficient businesses. While there is merit to this analysis of the minimum wage increase, the analysis is only true to an extent. Overall, the negative externalities outweigh the benefits for the impoverished.

The negative effects of minimum wage can be offset through various strategies as stated by John Schmitt: passing on costs to customers, eliminating costs, and wage reductions for higher wage workers. These strategies, while effective, are only effective in the short-run, as employers often use other strategies that are detrimental to workers. Businesses will do everything in their power to maintain profitability and will generally not accept smaller profit margins due to the increased operating costs. As is the case of some businesses, Grace Lordan states, We find that a significant number of individuals who were previously in automatable employment are unemployed in the period following a minimum wage increase. These businesses are driven to conserve capital due to the increased operating cost from minimum wage hikes.

Minimum wage is a tool that was created with the intention to fight poverty and an unequal distribution of wealth. The intention for this tool to fight poverty was proven to be false as the increased operating costs placed financial strain on employers. To reduce the financial strains, advocates of minimum wage increases state that the increased operating costs can be offset through the use of strategies devised by John Schmitt: accepting smaller profits, decrease employee wages, or to pass off additional costs to consumers. These strategies are proven ineffective as they hinder profitability of a business, strategies to conserve capital that are used include limiting the human work force through automation as it reduces operating costs through hourly wages.

Though it may seem like a sound idea to many Americans on the surface, looking to the data shows that increasing the minimum wage is a poor economic policy. As the minimum wage raises barriers to entry level jobs, while simultaneously raising unemployment, it can be concluded that the negative externalities far outweigh any possible positive effects of the increased minimum wage.

The Effects of Minimum Wage