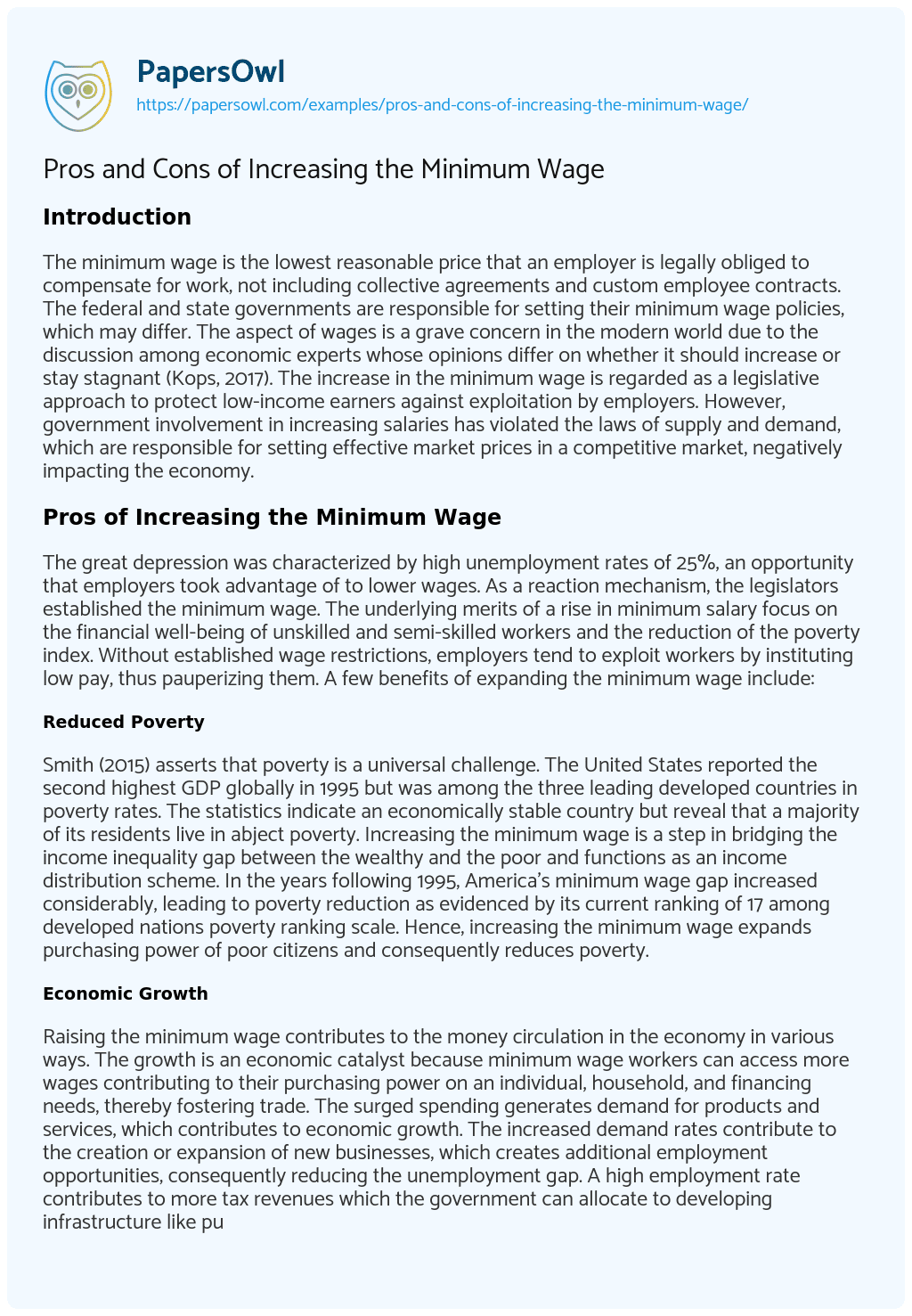 The minimum wage is the lowest reasonable price that an employer is legally obliged to compensate for work, not including collective agreements and custom employee contracts. The federal and state governments are responsible for setting their minimum wage policies, which may differ. The aspect of wages is a grave concern in the modern world due to the discussion among economic experts whose opinions differ on whether it should increase or stay stagnant (Kops, 2017). The increase in the minimum wage is regarded as a legislative approach to protect low-income earners against exploitation by employers. However, government involvement in increasing salaries has violated the laws of supply and demand, which are responsible for setting effective market prices in a competitive market, negatively impacting the economy.

Pros of Increasing the Minimum Wage

The great depression was characterized by high unemployment rates of 25%, an opportunity that employers took advantage of to lower wages. As a reaction mechanism, the legislators established the minimum wage. The underlying merits of a rise in minimum salary focus on the financial well-being of unskilled and semi-skilled workers and the reduction of the poverty index. Without established wage restrictions, employers tend to exploit workers by instituting low pay, thus pauperizing them. A few benefits of expanding the minimum wage include:

Smith (2015) asserts that poverty is a universal challenge. The United States reported the second highest GDP globally in 1995 but was among the three leading developed countries in poverty rates. The statistics indicate an economically stable country but reveal that a majority of its residents live in abject poverty. Increasing the minimum wage is a step in bridging the income inequality gap between the wealthy and the poor and functions as an income distribution scheme. In the years following 1995, America’s minimum wage gap increased considerably, leading to poverty reduction as evidenced by its current ranking of 17 among developed nations poverty ranking scale. Hence, increasing the minimum wage expands purchasing power of poor citizens and consequently reduces poverty.

Raising the minimum wage contributes to the money circulation in the economy in various ways. The growth is an economic catalyst because minimum wage workers can access more wages contributing to their purchasing power on an individual, household, and financing needs, thereby fostering trade. The surged spending generates demand for products and services, which contributes to economic growth. The increased demand rates contribute to the creation or expansion of new businesses, which creates additional employment opportunities, consequently reducing the unemployment gap. A high employment rate contributes to more tax revenues which the government can allocate to developing infrastructure like public transport systems that stimulate economic development. A rise in the minimum wage also indicates that low-income employees get sufficient funds to support their families with minimal government assistance (Neumark & Wascher, 2008). Reducing people’s dependence on government aid allows for a reallocation of federal funds in projects that will expand the country’s economy.

The principal justification against raising the minimum wage is that it jeopardizes the employers’ interest at the employees’ cost. However, this presumption is false because high employee dissatisfaction rates contribute to high turnover rates creating challenges for employers. Increasing the minimum wage reduces the likelihood of employees quitting or switching jobs. This benefits employers by preventing them from losing qualified personnel to their competitors. By reducing turnover rates, employers can reduce costs related to recruiting and training new employees. Consistently, marginalized communities such as women and minorities are most affected by income inequality. Increasing the minimum wage is a valuable strategy for reducing race-based and gender-based income inequality.

Weaknesses of Raising the Minimum Wage

Economists against raising the minimum wage proclaim that it has a far-reaching negative impact on employers, employees, and the overall economy (Belman & Wolfson, 2014). Labor is a central element of the production cost which should always be sustained at a low level for business viability. Inflation is a consequence of increased production costs which increase product prices in the market. An increase in employee remuneration creates wage-push inflation, which indicates a rise in production costs and, hence, an increased product price which contributes to a loss of currency value. Thus, increasing wages leads to higher production costs and, consequently, inflation (Peneva & Rudd, 2017).

Workers in different industries receive different compensations according to productivity levels. Financially, it is not logical to compensate a worker $15 or more per hour when their exact productivity is lower, for instance, $10. This will create losses for business and consequently failure to sustain operations. In accordance with the principles of supply and demand, the rise in manufacturing cost results in a surge in product prices, leading to declined demand and an effort by organizations to reduce their production quantity. This contributes to reduced demand for labor leading to layoffs and increasing unemployment rates.

A country with a high unemployment rate experienced reduced economic growth due to declining tax revenues (Kosters, 1996). The government revenue dedicated to improving the country’s infrastructure shrinks, leading to decreased infrastructure progress and affecting economic growth. The expanding unemployment rates contribute to increased poverty rates and consequently lead to illegal activities such as crime and substance abuse resulting from desperation. Expanding the minimum wage also elicits innovation as firms acquire an incentive to employ machinery instead of human labor. The resulting increase in labor costs has seen a rapid shift from manual production techniques to automation (Wolfram, 2017). For instance, inventions involving robots to conduct formulaic activities in various industries such as the cuisine industry, production, and transportation industry have increased, creating job losses.

An increase in minimum wage restricts the aggressiveness of professional ventures, specifically multinational businesses. Countries with inflated remunerations usher in the disintegration of firms or lead to inflation due to high-priced products. Consequently, consumers develop a preference for low-cost imports. Thus, the gross domestic product (GDP) decreases as a considerable segment of the country’s funds is spent on other countries’ products, shepherding declined revenue. Import dependency also destroys domestic industries, thus, derailing economic growth. The government bears a responsibility to its taxpayers to advance trade incentives to local manufacturers, and raising the minimum wage discourages domestic investors. California increased its minimum wage to $15 in 2022, which produced cautionary signs such as relocation or closure of business firms. Research suggests that full implementation of the policy in California will considerably collapse business entities (Saltsman, 2017).

Raising the minimum wage has implications of increasing employer burdens leading to declined business growth and high unemployment rates. For instance, most companies in America function with a pre-arranged remuneration budget, and a rise in the wage rates will contribute to slower recruitment and surged layoffs. The wage limit restriction enforced by the government may be based on political motivations rather than on cost-benefit analysis. The arbitrary setting of base salaries is not ideal because separate industries have contrasting prevailing elements. It would be unsuitable to govern different economic sectors equally as they operate in dissimilar conditions. The implementation and monitoring of a base salary increment is an extortionate basis compelling a needless economic burden.

Hence, the labor market should be managed similarly to other markets where the market conditions determine the costs. The wages determined by the market eliminate the challenge or arbitrary fixation of the wage rate since different industries can set appropriate compensation which is flexible depending on the market trends. Thus, increasing the base wages denies countless people the opportunity to acquire apprenticeship chances, contributing to missed opportunities for a learning platform that equips under-skilled and low-skilled people with the competencies and experience necessary for future recruitment. Several people would be keen to accept a salary below the minimum wage, and increasing the amount deprives them of the chance. Where employers can comply with wage increase policies, they counteract the economic implications with reduced employee benefits like on-the-job learning, reduced working hours, the abolition of extra shifts, reduced quality of the work environment, and so forth. Rather than increasing the base salary, the forces of demand and supply should be acknowledged to determine the appropriate compensation for the economic benefits of both the employer and the employees.

The primary objective of raising the base salary is to discourage employers from exploiting their workers through low pay. Raising the minimum wage is an essential strategy for reducing poverty rates as higher salaries improve workers’ purchasing power and, consequently, their living standards. Increasing the minimum wage also stimulates economic growth, reducing turnover rates and reducing income inequality gaps. Nonetheless, an increment in the minimum wage is more damaging than helpful to employers, workers, and the economy. A few detrimental effects of raising the minimum wage include inflation, worsened unemployment, and a decline in local industries contributing to an over-reliance on imports. Market drives of supply and demand are valuable in determining the production cost of aspects such as raw materials and product prices.

In my opinion, the federal minimum wage should be raised but in a way that aligns with the prevailing market and economic conditions. The U.S. Department of Labor (n.d) indicates that the current federal minimum wage is $7.25/per hour, which has been set since 2009. I feel that this current minimum wage is incompatible with the current living standards to enable citizens to live comfortable lives. However, forcefully raising the minimum wage to $15/hour would inadvertently make the economic situation worse due to the sudden impact on employers, thus, contributing to job layoffs. Thus, the federal government should assess the federal base salary every five years to reflect the current living costs. This would also help employers soften the weight of the wage increase.

Pros and Cons of Increasing the Minimum Wage. (2019, Jan 26). Retrieved from https://papersowl.com/examples/pros-and-cons-of-increasing-the-minimum-wage/