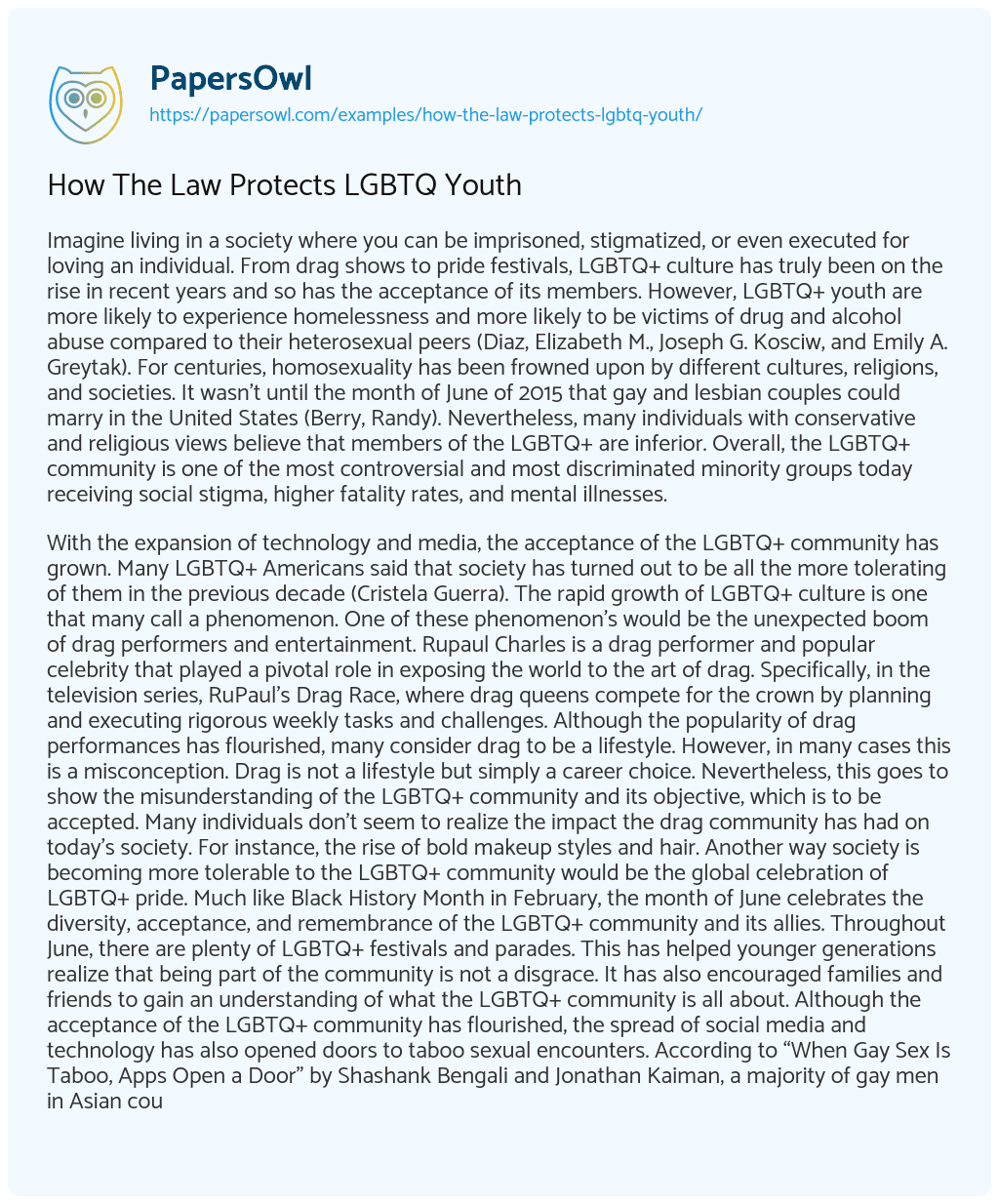 Imagine living in a society where you can be imprisoned, stigmatized, or even executed for loving an individual. From drag shows to pride festivals, LGBTQ+ culture has truly been on the rise in recent years and so has the acceptance of its members. However, LGBTQ+ youth are more likely to experience homelessness and more likely to be victims of drug and alcohol abuse compared to their heterosexual peers (Diaz, Elizabeth M., Joseph G. Kosciw, and Emily A. Greytak). For centuries, homosexuality has been frowned upon by different cultures, religions, and societies. It wasn’t until the month of June of 2015 that gay and lesbian couples could marry in the United States (Berry, Randy). Nevertheless, many individuals with conservative and religious views believe that members of the LGBTQ+ are inferior. Overall, the LGBTQ+ community is one of the most controversial and most discriminated minority groups today receiving social stigma, higher fatality rates, and mental illnesses.

With the expansion of technology and media, the acceptance of the LGBTQ+ community has grown. Many LGBTQ+ Americans said that society has turned out to be all the more tolerating of them in the previous decade (Cristela Guerra). The rapid growth of LGBTQ+ culture is one that many call a phenomenon. One of these phenomenon’s would be the unexpected boom of drag performers and entertainment. Rupaul Charles is a drag performer and popular celebrity that played a pivotal role in exposing the world to the art of drag. Specifically, in the television series, RuPaul’s Drag Race, where drag queens compete for the crown by planning and executing rigorous weekly tasks and challenges. Although the popularity of drag performances has flourished, many consider drag to be a lifestyle. However, in many cases this is a misconception. Drag is not a lifestyle but simply a career choice. Nevertheless, this goes to show the misunderstanding of the LGBTQ+ community and its objective, which is to be accepted. Many individuals don’t seem to realize the impact the drag community has had on today’s society. For instance, the rise of bold makeup styles and hair. Another way society is becoming more tolerable to the LGBTQ+ community would be the global celebration of LGBTQ+ pride. Much like Black History Month in February, the month of June celebrates the diversity, acceptance, and remembrance of the LGBTQ+ community and its allies. Throughout June, there are plenty of LGBTQ+ festivals and parades. This has helped younger generations realize that being part of the community is not a disgrace. It has also encouraged families and friends to gain an understanding of what the LGBTQ+ community is all about. Although the acceptance of the LGBTQ+ community has flourished, the spread of social media and technology has also opened doors to taboo sexual encounters. According to “When Gay Sex Is Taboo, Apps Open a Door” by Shashank Bengali and Jonathan Kaiman, a majority of gay men in Asian countries often use gay hookup apps seeking for sexual intercourse despite the national laws making same-sex intercourse illegal. This supports my claim by assessing the double-standard of heterosexual and homosexual relationships and how different countries often ban and restrict homosexuals from participating in activities that heterosexual individuals could do at their free will without being in fear of legal action taking place or execution.

Throughout history, homosexuality has been demonized by various religions, cultures, and individuals. Many religions like Christianity, Catholicism, Judaism, and Islam have had controversy when concerning the topic of homosexuality. Although some individuals claim that the Bible, Quran, and other religious text, state that homosexuality is sinful and wrong, others simply just state that it goes against their moral beliefs. Acceptance and awareness have had a negative impact to major organized religions since individuals are moving away from corrupt and unloving beliefs. This includes the religion’s views and problems when concerning topics like homosexuality, priest sex scandals, and economic scandals. Nevertheless, every religion has extremists and their own way of dealing with homosexual and transgender individuals. Christianity and Catholicism has been known to use techniques like excessive prayers, nonstop lectures, and recommending lesbian and gay individuals to consult with a priest to attend “sexual conversion therapy” (Kimberley Brown). Islam extremists are known for their gruesome murders and inhumane beliefs. One of the biggest and most recent examples of this would be the Orlando Massacre. According to a report published by Ayaan Hirsi Ali, many Muslim-majority nations have legal guidelines that criminalize and punish homosexuals in line with Islamic law. In this report he also stated that Rudolph Peters published a book, “Crime and Punishment in Islamic Law,” discussing how Islamic schools condemn homosexuality and teach future generations to hate and discriminate against members of the LGBTQ+ community (Ayaan Hirsi Ali). Punishments for homosexuals and those caught or accused of homosexual acts include whippings, exorcisms, and even death (Ayaan Hirsi Ali). This supports my claim by assessing the various ways different religions deal with homosexuality.

In my previous sources, I have provided information of how homosexuality is frowned upon and overall viewed as inferior. However, in this paragraph, I will further support my claim by presenting how discrimination affects the mental health and day to day life of the individuals in the LGBTQ+ community. According to “School Connectedness for Lesbian, Gay, Bisexual, and Transgender Youth”, LGBTQ+ teens often face challenges that prevent them to connect to their studies and social activities. These adolescents are also at a higher risk of homelessness and poverty compared to their heterosexual peers they also more frequently experience depression, stigma, and suicide (Diaz, Elizabeth M., Joseph G. Kosciw, and Emily A. Greytak). This source supports my claim because it brings awareness on how harassment to the LGBTQ+ youth affects the mental health of the individual. Another piece of evidence that supports my claim is the fact that According to “Young People Identify As LGBT at Higher Rate” by Cristela Guerra, about a quarter of LGBTQ+ members claimed that they attempted suicide five times more than that of their heterosexual counterparts. A multitude of LGBTQ+ individuals also state that hate crimes targeted to those pertaining to the community tend to be more hostile and often lead to life threatening injuries, especially when based upon religious beliefs, ethnicity, and race, and a staggering 88 percent of LGBTQ+ youth claimed that they have received prejudice over the recent years as well (Guerra, Cristela). 33 percent of LGBTQ+ middle aged seniors also have been diagnosed with depression, this goes to show that older age groups face related challenges (Guerra, Cristela).

In conclusion, many destinations around the world have homophobia and transphobia embedded into their laws and religions, such as Christianity, Islam, Catholicism, and Judaism. Homophobia in my community isn’t as extreme as in foreign countries. However, I can say there has been a small amount of hate crimes in my city, Miami, where a gay couple were physically and verbally attacked just for holding hands in public. As a student in the LGBTQ+ community I can say that I have been a victim of bullying. I believe that with the impacts of media today, LGBTQ+ culture has become more mainstream making it more acceptable in the United States. Nevertheless, in foreign countries the LGBTQ+ lifestyle is still frowned upon and often leads to homosexual and transgender individuals to life-threatening situations like execution. However, I truly hope there is a shift on how individuals view and treat members of the LGBTQ+ community in the future.

How The Law Protects LGBTQ Youth. (2020, Jul 23). Retrieved from https://papersowl.com/examples/how-the-law-protects-lgbtq-youth/