“Confessions of a Bad Feminist” by Roxane Gay 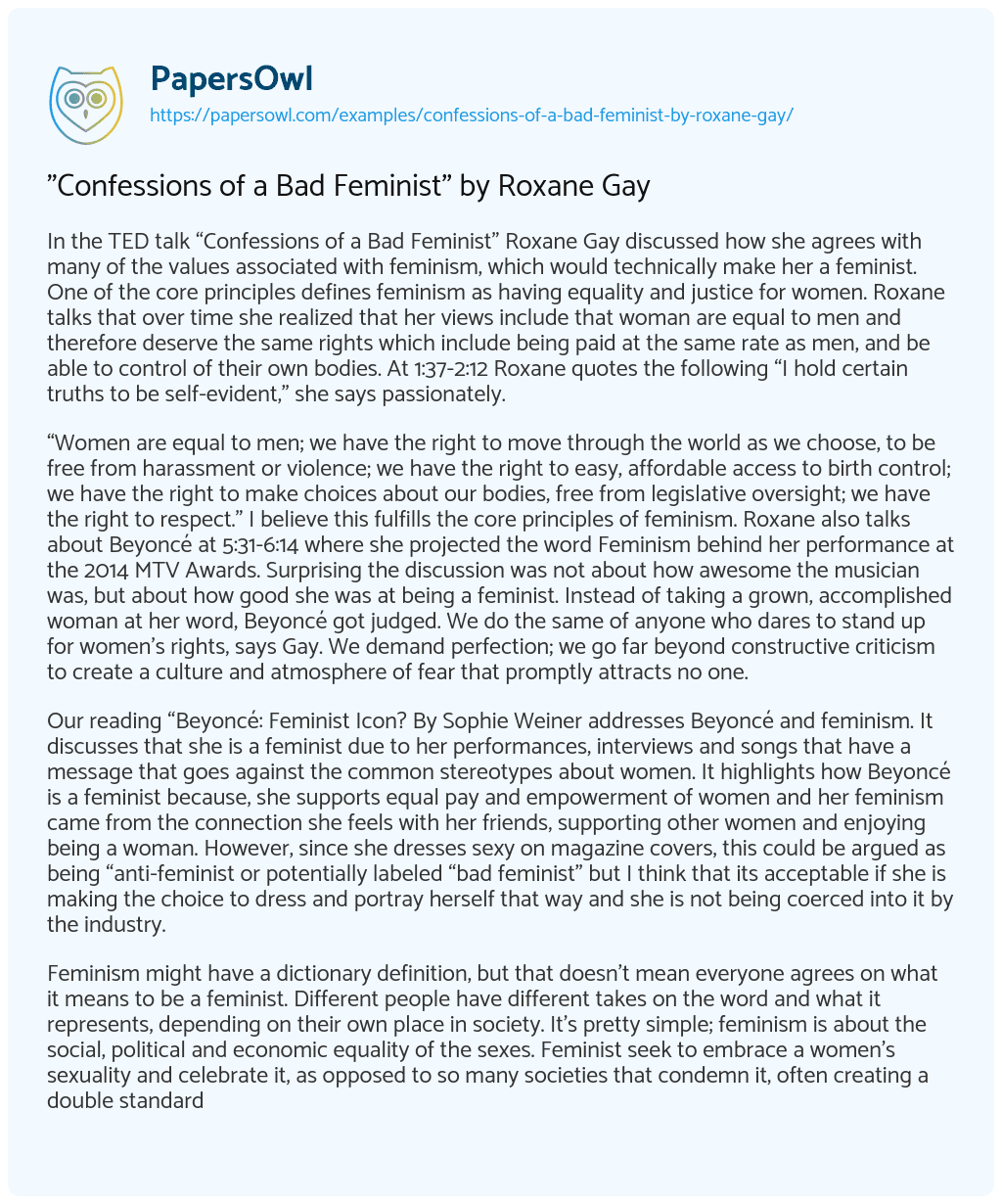 In the TED talk “Confessions of a Bad Feminist” Roxane Gay discussed how she agrees with many of the values associated with feminism, which would technically make her a feminist. One of the core principles defines feminism as having equality and justice for women. Roxane talks that over time she realized that her views include that woman are equal to men and therefore deserve the same rights which include being paid at the same rate as men, and be able to control of their own bodies. At 1:37-2:12 Roxane quotes the following “I hold certain truths to be self-evident,” she says passionately.

“Women are equal to men; we have the right to move through the world as we choose, to be free from harassment or violence; we have the right to easy, affordable access to birth control; we have the right to make choices about our bodies, free from legislative oversight; we have the right to respect.” I believe this fulfills the core principles of feminism. Roxane also talks about Beyoncé at 5:31-6:14 where she projected the word Feminism behind her performance at the 2014 MTV Awards. Surprising the discussion was not about how awesome the musician was, but about how good she was at being a feminist. Instead of taking a grown, accomplished woman at her word, Beyoncé got judged. We do the same of anyone who dares to stand up for women’s rights, says Gay. We demand perfection; we go far beyond constructive criticism to create a culture and atmosphere of fear that promptly attracts no one.

Our reading “Beyoncé: Feminist Icon? By Sophie Weiner addresses Beyoncé and feminism. It discusses that she is a feminist due to her performances, interviews and songs that have a message that goes against the common stereotypes about women. It highlights how Beyoncé is a feminist because, she supports equal pay and empowerment of women and her feminism came from the connection she feels with her friends, supporting other women and enjoying being a woman. However, since she dresses sexy on magazine covers, this could be argued as being “anti-feminist or potentially labeled “bad feminist” but I think that its acceptable if she is making the choice to dress and portray herself that way and she is not being coerced into it by the industry.

Feminism might have a dictionary definition, but that doesn’t mean everyone agrees on what it means to be a feminist. Different people have different takes on the word and what it represents, depending on their own place in society. It’s pretty simple; feminism is about the social, political and economic equality of the sexes. Feminist seek to embrace a women’s sexuality and celebrate it, as opposed to so many societies that condemn it, often creating a double standard between genders.

The article “The Cult of Virginity” By Jessica Valenti highlighted virginity and differences between genders. Boys aren’t put under the same microscope, as girls are when it comes to having sex. Rather, it’s quite the opposite. While girls are put down and thought of as “bad girls” or “sluts,” boys are patted on the back and congratulated when they have sex. As a woman this double standard is so frustrating. Another key area that makes a feminist is how they feel women should be viewed. Women should be viewed on talents and not how they look. One article that touched on this was “What we do for Love” by Rose Weitz. Women are changing their hair in order to please men. While hair is a good bonding connection in relationships, it can also become an object for men to control/critique. Women should not have to change themselves just to please a man.

Finally, Feminists believe that men and women should have equal rights in politics as well as other social concerns. There have been numerous women’s social movements throughout the past decade’s most recently the 2018 Women’s March, each of them moving closer to gender equality. Feminists have a strong desire to make it possible for women to vote, take office, and complete other political duties the same as men would. They want to make sure that they don’t stay silent and allow men to control everything and do all the work. Freedom does not only pertain to those political and social issues, but also their physical and emotional needs. Female’s role as mother has more responsibilities expected of her than any other women’s job. Most people have grown up in a society by either seeing in their own house or portrayed on TV where a mother has certain duties she must perform, If she doesn’t perform these, then she is automatically labeled poorly.

On the other hand, the father of a family can work all day long, and maybe do a few household chores every so often, and automatically be labeled a wonderful parent. In conclusion feminism is when women are valued for themselves as men are, and when they can walk down a street without being harassed. Being able to interview for jobs and being considered equally as men interviewing. It’s when couples split up housework fairly and stay at home dads have the same support stay at home moms do. It’s when transgender women and men to get the healthcare they need that is appropriate for their bodies, and what it says on their driver’s license isn’t considered relevant. Feminism is not world peace or love and harmony, but the removal of inequality of women.

"Confessions of a Bad Feminist" by Roxane Gay. (2021, Apr 26). Retrieved from https://papersowl.com/examples/confessions-of-a-bad-feminist-by-roxane-gay/

Ewa Partum and the Feminist Movement

Radical Feminist Perspective on Education in the UK

A Debate on Pornography from Feminist Perspective