Feminist Critque of the 1950s 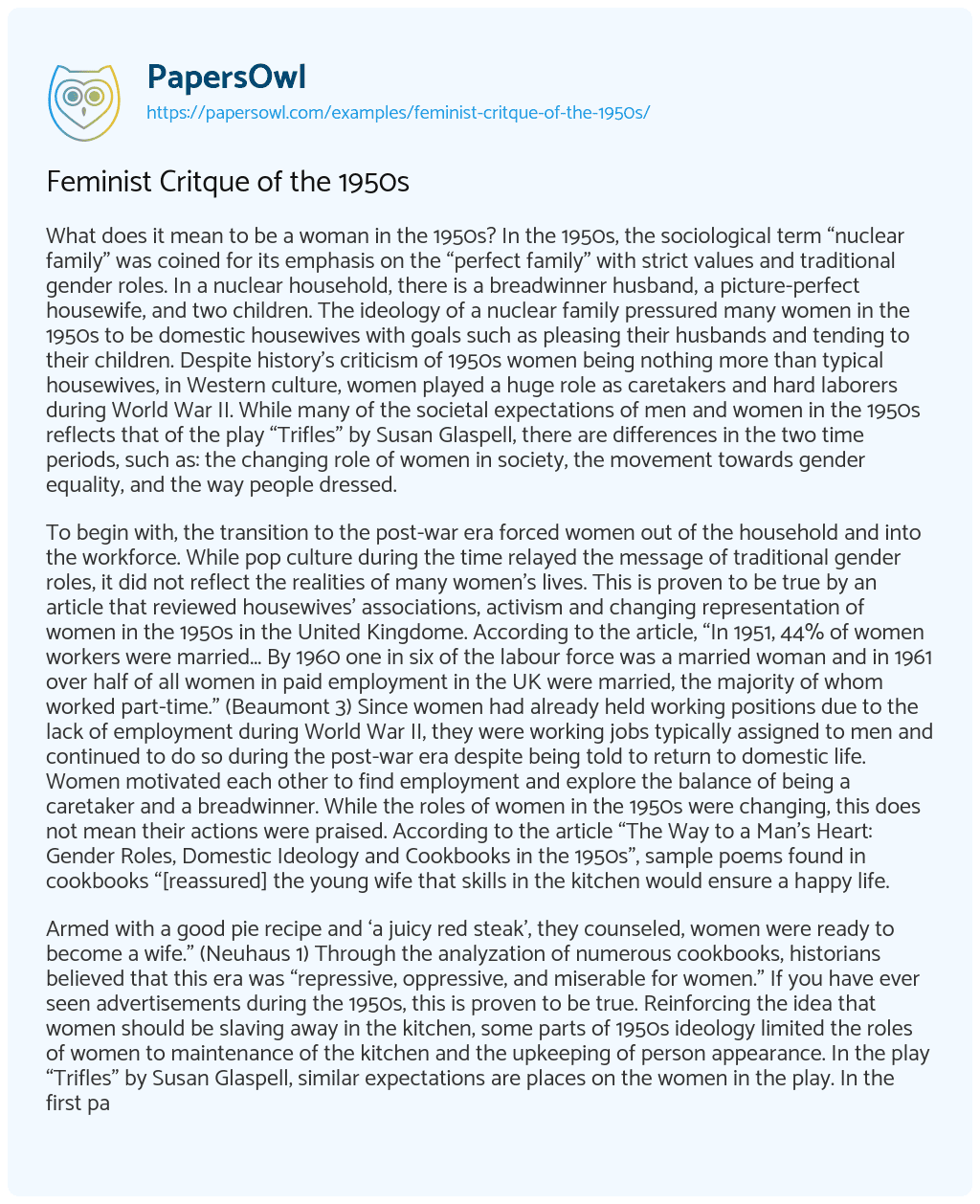 What does it mean to be a woman in the 1950s? In the 1950s, the sociological term “nuclear family” was coined for its emphasis on the “perfect family” with strict values and traditional gender roles. In a nuclear household, there is a breadwinner husband, a picture-perfect housewife, and two children. The ideology of a nuclear family pressured many women in the 1950s to be domestic housewives with goals such as pleasing their husbands and tending to their children. Despite history’s criticism of 1950s women being nothing more than typical housewives, in Western culture, women played a huge role as caretakers and hard laborers during World War II. While many of the societal expectations of men and women in the 1950s reflects that of the play “Trifles” by Susan Glaspell, there are differences in the two time periods, such as: the changing role of women in society, the movement towards gender equality, and the way people dressed.

To begin with, the transition to the post-war era forced women out of the household and into the workforce. While pop culture during the time relayed the message of traditional gender roles, it did not reflect the realities of many women’s lives. This is proven to be true by an article that reviewed housewives’ associations, activism and changing representation of women in the 1950s in the United Kingdome. According to the article, “In 1951, 44% of women workers were married… By 1960 one in six of the labour force was a married woman and in 1961 over half of all women in paid employment in the UK were married, the majority of whom worked part-time.” (Beaumont 3) Since women had already held working positions due to the lack of employment during World War II, they were working jobs typically assigned to men and continued to do so during the post-war era despite being told to return to domestic life. Women motivated each other to find employment and explore the balance of being a caretaker and a breadwinner. While the roles of women in the 1950s were changing, this does not mean their actions were praised. According to the article “The Way to a Man’s Heart: Gender Roles, Domestic Ideology and Cookbooks in the 1950s”, sample poems found in cookbooks “[reassured] the young wife that skills in the kitchen would ensure a happy life.

Armed with a good pie recipe and ‘a juicy red steak’, they counseled, women were ready to become a wife.” (Neuhaus 1) Through the analyzation of numerous cookbooks, historians believed that this era was “repressive, oppressive, and miserable for women.” If you have ever seen advertisements during the 1950s, this is proven to be true. Reinforcing the idea that women should be slaving away in the kitchen, some parts of 1950s ideology limited the roles of women to maintenance of the kitchen and the upkeeping of person appearance. In the play “Trifles” by Susan Glaspell, similar expectations are places on the women in the play. In the first part of the play, the men criticize Mrs.Wright for being a bad caretaker. The court attorney, George Henderson, comments, “Here’s a nice mess” and “Not much of a house-keeper, would you say, ladies?” (Glaspell 743) Evidently, the court attorney takes the time to blame Mrs.Wright for being a bad housewife since women during that time period are expected to maintain the image of the house. It is important to analyze hobbies associated to women and how it affects the development of the play “Trifles”. Knitting/sewing is considered a very feminine hobby.

In the play, the women take note on the murder women used to kill Mr.Wright and how it is “awfully crafty and a funny way to kill a man.” (Glaspell 745) Instead of using the gun in the house, a rope was crafted and used to hang him. This play hint at the fact that the murder weapon, the rope, was knotted similar to the style of Mrs.Wright’s crafts, therefore hinting at the true killer. Clearly, both time periods relayed similar expectations of women being the housemaker. However, in the 1950s the changing role of women in society recognized them as hard workers while the women in Trifles were still characterized as incapable of doing a man’s work such as murder (although the murder weapon hints at Mrs.Wright.)

Additionally, the 1950s slowly progressed towards gender equality. In contribution to their new found position in society as workers, women became interested in joining housewives’ associations where they were involved in politics and activism. According to the article on the changing representation of women in the 1950s, “Women’s contribution to the war effort further consolidated the state’s recognition of women citizens… by the late 1940s the ‘citizen housewife was a significant political force’” (Beaumont 4) Within these associations, women would tackle specific problems such as lack of self-confidence, lack of economic power and lack of career options. Solutions were proposed such as “equal pay for equal work, part-time work opportunities for women, the greater availability of family planning and equal moral standard.” (Beaumont 4) While it was clear women were appreciated for their contribution efforts in society, it did not mean that their demands were met.

Although many of these organizations found in the United Kingdom worked hard towards gender equality for women, there was still unequal treatment of women in the workforce compared to men such as lower wages. Attempting to discourage women from continuing their jobs, employers believed women should return to their homes and allow men to be the better workers. As seen, these associations allow women to bond together in effort to address social injustices, but it does not mean they were met with a positive outcome. In comparison to the play “Trifles”, the gender divide and sexist treatment is evident. Throughout the play, the men and women are separated in a symbolic way. The men worked mainly in the upstairs, while the women were downstairs just grabbing things for Mrs.Wright.

Through the little comments made by the men, we can see the men look down upon the work of women. Little comments are made throughout the play are sexist, “Well, women are used to worrying over trifles.” (Glaspell 743) and “Ah, loyal to your sex, I see.” (Glaspell 743) During that time period, it was believed that women were strictly housewives and men were the only people holding job positions. Ironically, when Mrs.Hale and Mrs.Peter are expected to do mindless work such as packing clothes, they actually figure out more things about the murder mystery than the men. For example, the make the connection to the bird and Mrs.Wright and how they were both abused by Mr.Wright. Obviously, while there was more recognition for women in the 1950s for their contribution in society, like the play “Trifles”, sexist towards women still existed and caused many setbacks for the women. However, the women in “Trifles” were able to use sexism to their advantage. Furthermore, 1950s fashion statements for women were more advanced than the ones found in the play “Trifles.”

Ewa Partum and the Feminist Movement

“Confessions of a Bad Feminist” by Roxane Gay

Radical Feminist Perspective on Education in the UK