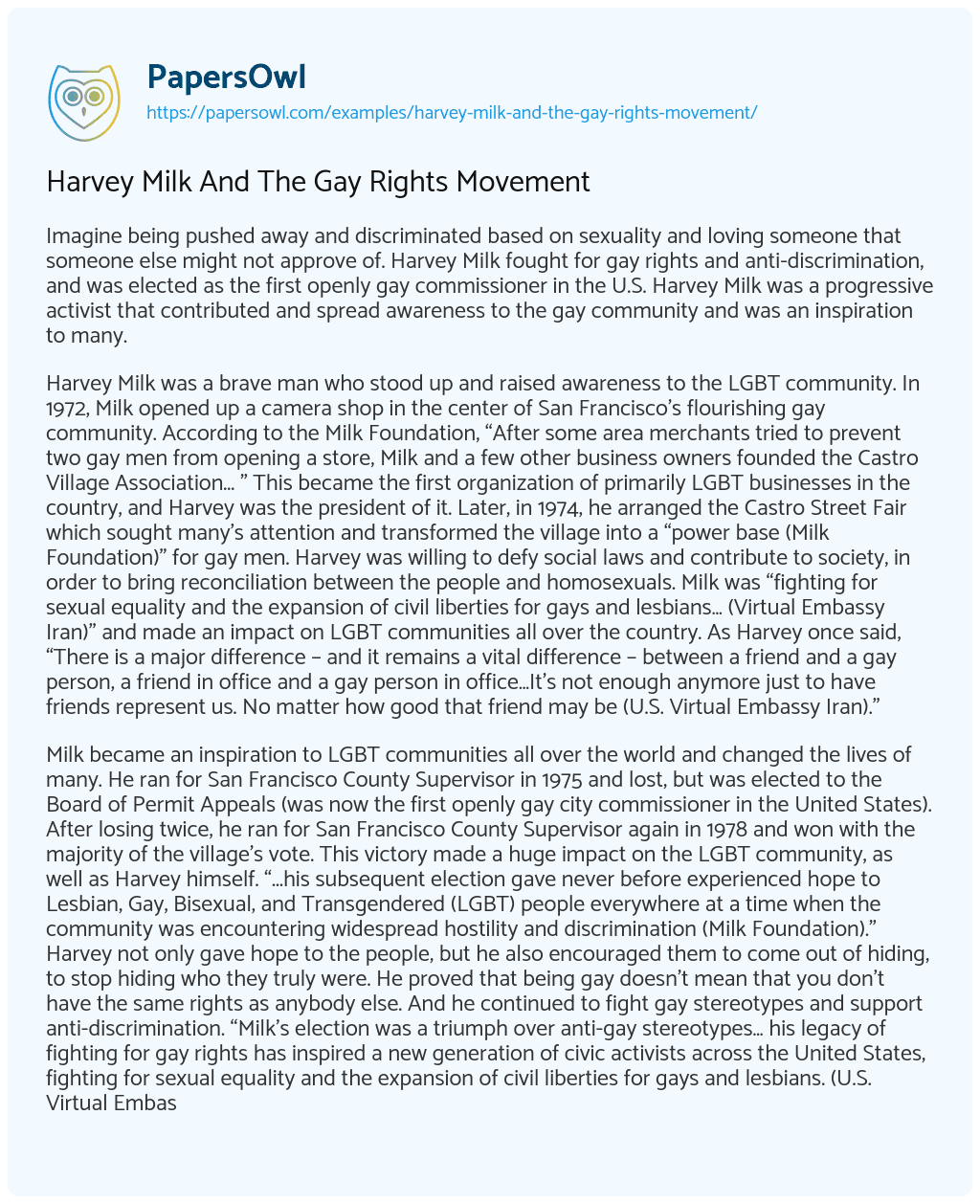 Imagine being pushed away and discriminated based on sexuality and loving someone that someone else might not approve of. Harvey Milk fought for gay rights and anti-discrimination, and was elected as the first openly gay commissioner in the U.S. Harvey Milk was a progressive activist that contributed and spread awareness to the gay community and was an inspiration to many.

Harvey Milk was a brave man who stood up and raised awareness to the LGBT community. In 1972, Milk opened up a camera shop in the center of San Francisco’s flourishing gay community. According to the Milk Foundation, “After some area merchants tried to prevent two gay men from opening a store, Milk and a few other business owners founded the Castro Village Association… ” This became the first organization of primarily LGBT businesses in the country, and Harvey was the president of it. Later, in 1974, he arranged the Castro Street Fair which sought many’s attention and transformed the village into a “power base (Milk Foundation)” for gay men. Harvey was willing to defy social laws and contribute to society, in order to bring reconciliation between the people and homosexuals. Milk was “fighting for sexual equality and the expansion of civil liberties for gays and lesbians… (Virtual Embassy Iran)” and made an impact on LGBT communities all over the country. As Harvey once said, “There is a major difference – and it remains a vital difference – between a friend and a gay person, a friend in office and a gay person in office…It’s not enough anymore just to have friends represent us. No matter how good that friend may be (U.S. Virtual Embassy Iran).”

Milk became an inspiration to LGBT communities all over the world and changed the lives of many. He ran for San Francisco County Supervisor in 1975 and lost, but was elected to the Board of Permit Appeals (was now the first openly gay city commissioner in the United States). After losing twice, he ran for San Francisco County Supervisor again in 1978 and won with the majority of the village’s vote. This victory made a huge impact on the LGBT community, as well as Harvey himself. “…his subsequent election gave never before experienced hope to Lesbian, Gay, Bisexual, and Transgendered (LGBT) people everywhere at a time when the community was encountering widespread hostility and discrimination (Milk Foundation).” Harvey not only gave hope to the people, but he also encouraged them to come out of hiding, to stop hiding who they truly were. He proved that being gay doesn’t mean that you don’t have the same rights as anybody else. And he continued to fight gay stereotypes and support anti-discrimination. “Milk’s election was a triumph over anti-gay stereotypes… his legacy of fighting for gay rights has inspired a new generation of civic activists across the United States, fighting for sexual equality and the expansion of civil liberties for gays and lesbians. (U.S. Virtual Embassy Iran)”

Harvey Milk supported, and helped benefit the lives of LGBT people around the globe. His success in both founding the Castro Village Association and winning the election gave hope to the people that they could one day come out and not being discriminated for being true to themself. Harvey brought us one step closer to gay rights and sexual equality. Had he not take a stand, we may not have gotten these rights as early as we did.

Harvey Milk and the Gay Rights Movement in America

Harvey Milk and his “Hope” Speech

Rights are a Fickle Thing