Freedom of Religion and Gay Marriage 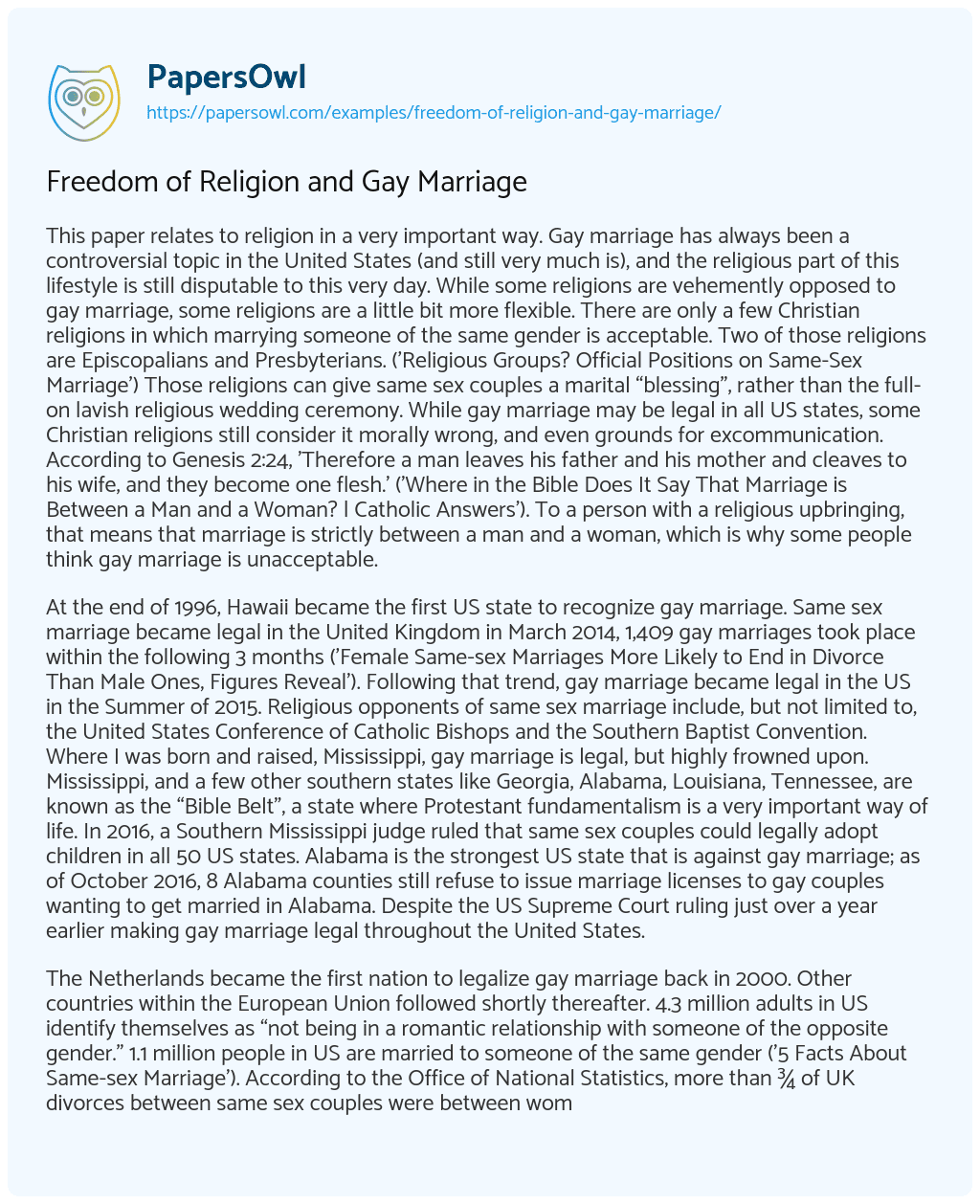 This paper relates to religion in a very important way. Gay marriage has always been a controversial topic in the United States (and still very much is), and the religious part of this lifestyle is still disputable to this very day. While some religions are vehemently opposed to gay marriage, some religions are a little bit more flexible. There are only a few Christian religions in which marrying someone of the same gender is acceptable. Two of those religions are Episcopalians and Presbyterians. (‘Religious Groups? Official Positions on Same-Sex Marriage’) Those religions can give same sex couples a marital “blessing”, rather than the full-on lavish religious wedding ceremony. While gay marriage may be legal in all US states, some Christian religions still consider it morally wrong, and even grounds for excommunication. According to Genesis 2:24, ‘Therefore a man leaves his father and his mother and cleaves to his wife, and they become one flesh.’ (‘Where in the Bible Does It Say That Marriage is Between a Man and a Woman? | Catholic Answers’). To a person with a religious upbringing, that means that marriage is strictly between a man and a woman, which is why some people think gay marriage is unacceptable.

At the end of 1996, Hawaii became the first US state to recognize gay marriage. Same sex marriage became legal in the United Kingdom in March 2014, 1,409 gay marriages took place within the following 3 months (‘Female Same-sex Marriages More Likely to End in Divorce Than Male Ones, Figures Reveal’). Following that trend, gay marriage became legal in the US in the Summer of 2015. Religious opponents of same sex marriage include, but not limited to, the United States Conference of Catholic Bishops and the Southern Baptist Convention. Where I was born and raised, Mississippi, gay marriage is legal, but highly frowned upon. Mississippi, and a few other southern states like Georgia, Alabama, Louisiana, Tennessee, are known as the “Bible Belt”, a state where Protestant fundamentalism is a very important way of life. In 2016, a Southern Mississippi judge ruled that same sex couples could legally adopt children in all 50 US states. Alabama is the strongest US state that is against gay marriage; as of October 2016, 8 Alabama counties still refuse to issue marriage licenses to gay couples wanting to get married in Alabama. Despite the US Supreme Court ruling just over a year earlier making gay marriage legal throughout the United States.

The Netherlands became the first nation to legalize gay marriage back in 2000. Other countries within the European Union followed shortly thereafter. 4.3 million adults in US identify themselves as “not being in a romantic relationship with someone of the opposite gender.” 1.1 million people in US are married to someone of the same gender (‘5 Facts About Same-sex Marriage’). According to the Office of National Statistics, more than ¾ of UK divorces between same sex couples were between women. 87 female unions ended compared to 25 male unions (‘Female Same-sex Marriages More Likely to End in Divorce Than Male Ones, Figures Reveal’).

Some individuals and companies still give unfair treatment to gay individuals, which occasionally results in a discrimination lawsuit. While some privately-owned companies do indeed have the right to turn away people due to their sexual preference, it may not be the morally correct thing to do, no matter what your religious beliefs. An example of a gay discrimination case started in July 2012, with the case of a Colorado wedding cake baker Jack Phillips, of Masterpiece Cakeshop in Lakewood, Colorado, who refused to bake cake for Charlie Craig and David Mullins, a gay couple who married in Massachusetts and wanted to have their reception party in Colorado with their friends and family. Phillips refused to make them a cake on the grounds of his Christian religious beliefs forbidding gay marriage but told them they were welcome to purchase anything that was already made. Phillips ended up winning the case on the grounds of religious freedom (‘Masterpiece Cakeshop V. Colorado Civil Rights Commission’). Another case occurred in Kentucky. County Clerk Kim Davis declined to issue a marriage license to David Ermold and David Moore, a gay couple from Morehead, Kentucky, in August 2015 due to her religious beliefs. This resulted in her arrest and she spent a week in jail for contempt. As a result, the names of County Clerks were removed from Kentucky Marriage Licenses indefinitely. However, Kentucky Governor Matt Bevin praised her and she was encouraged by Pope Francis to “stay strong” for standing up her belief of no gay marriage in her county (Daniel Burke, CNN Religion Editor).

Freedom of Religion and Gay Marriage. (2021, Mar 27). Retrieved from https://papersowl.com/examples/freedom-of-religion-and-gay-marriage/

Should Same-sex Marriage be Legalized?