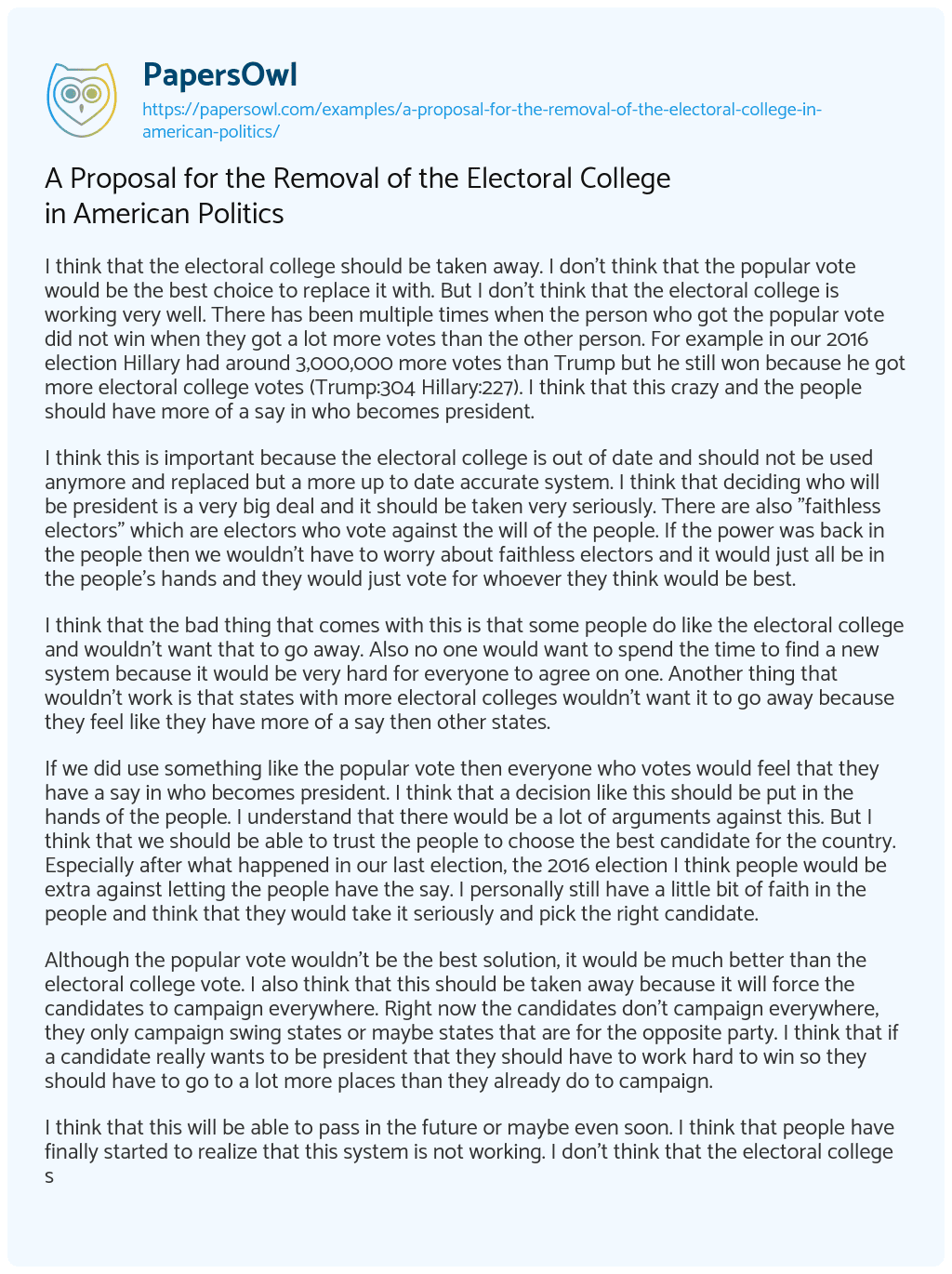 I think this is important because the electoral college is out of date and should not be used anymore and replaced but a more up to date accurate system. I think that deciding who will be president is a very big deal and it should be taken very seriously. There are also “faithless electors” which are electors who vote against the will of the people. If the power was back in the people then we wouldn’t have to worry about faithless electors and it would just all be in the people’s hands and they would just vote for whoever they think would be best.

I think that the bad thing that comes with this is that some people do like the electoral college and wouldn’t want that to go away. Also no one would want to spend the time to find a new system because it would be very hard for everyone to agree on one. Another thing that wouldn’t work is that states with more electoral colleges wouldn’t want it to go away because they feel like they have more of a say then other states.

If we did use something like the popular vote then everyone who votes would feel that they have a say in who becomes president. I think that a decision like this should be put in the hands of the people. I understand that there would be a lot of arguments against this. But I think that we should be able to trust the people to choose the best candidate for the country. Especially after what happened in our last election, the 2016 election I think people would be extra against letting the people have the say. I personally still have a little bit of faith in the people and think that they would take it seriously and pick the right candidate.

Although the popular vote wouldn’t be the best solution, it would be much better than the electoral college vote. I also think that this should be taken away because it will force the candidates to campaign everywhere. Right now the candidates don’t campaign everywhere, they only campaign swing states or maybe states that are for the opposite party. I think that if a candidate really wants to be president that they should have to work hard to win so they should have to go to a lot more places than they already do to campaign.

I think that this will be able to pass in the future or maybe even soon. I think that people have finally started to realize that this system is not working. I don’t think that the electoral college should have ever been created or put into place. If we get rid of the electoral college then everyone’s vote will finally count and everyone will feel like they have a say in who becomes president. Even though the popular vote isn’t exactly the best solution it would be a good replacement for now. The popular vote puts the power back into the people, where it should have always been.

A Proposal for the Removal of the Electoral College in American Politics. (2022, Nov 30). Retrieved from https://papersowl.com/examples/a-proposal-for-the-removal-of-the-electoral-college-in-american-politics/