The Macbeth and Banquo 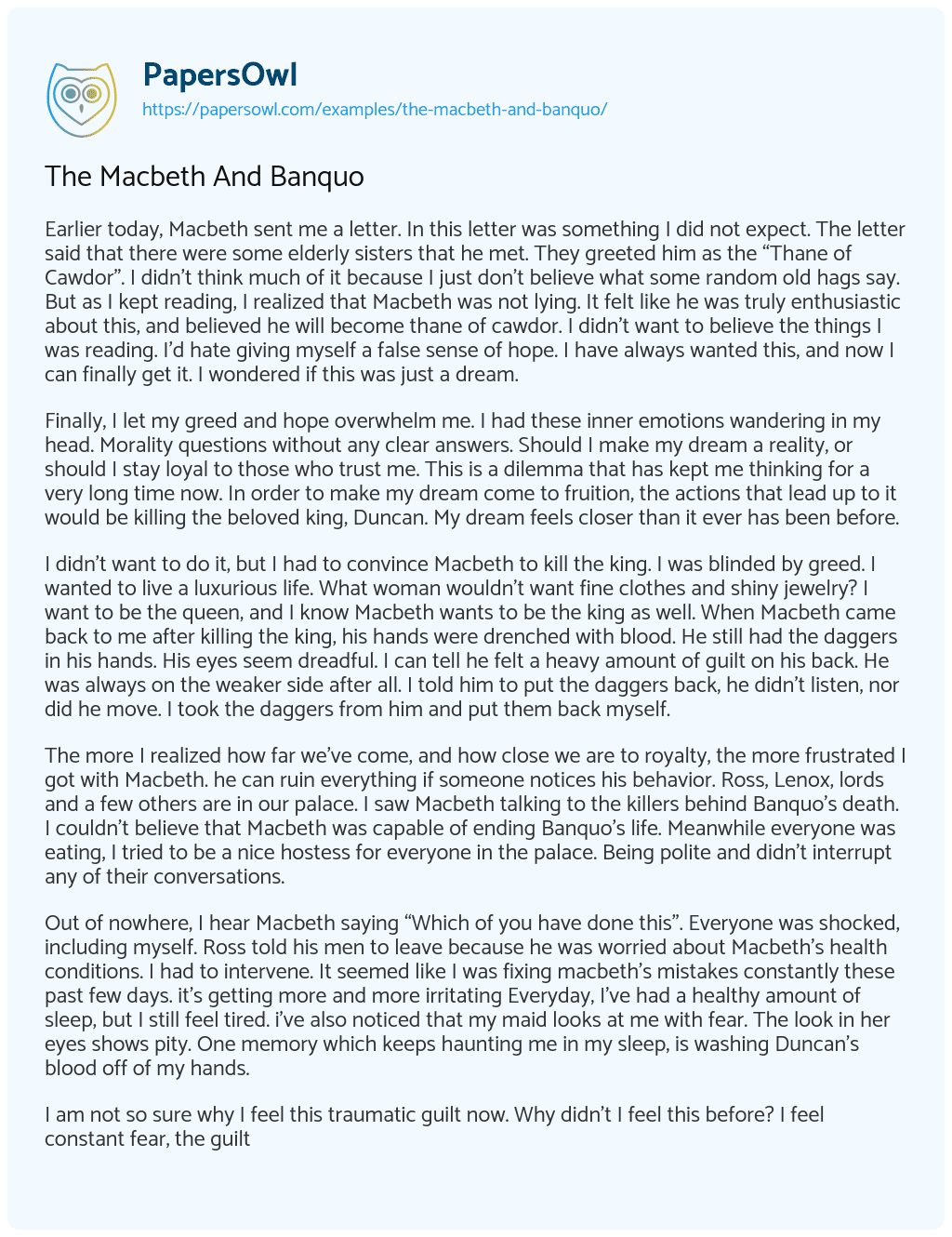 Earlier today, Macbeth sent me a letter. In this letter was something I did not expect. The letter said that there were some elderly sisters that he met. They greeted him as the “Thane of Cawdor”. I didn’t think much of it because I just don’t believe what some random old hags say. But as I kept reading, I realized that Macbeth was not lying. It felt like he was truly enthusiastic about this, and believed he will become thane of cawdor. I didn’t want to believe the things I was reading. I’d hate giving myself a false sense of hope. I have always wanted this, and now I can finally get it. I wondered if this was just a dream.

Finally, I let my greed and hope overwhelm me. I had these inner emotions wandering in my head. Morality questions without any clear answers. Should I make my dream a reality, or should I stay loyal to those who trust me. This is a dilemma that has kept me thinking for a very long time now. In order to make my dream come to fruition, the actions that lead up to it would be killing the beloved king, Duncan. My dream feels closer than it ever has been before.

I didn’t want to do it, but I had to convince Macbeth to kill the king. I was blinded by greed. I wanted to live a luxurious life. What woman wouldn’t want fine clothes and shiny jewelry? I want to be the queen, and I know Macbeth wants to be the king as well. When Macbeth came back to me after killing the king, his hands were drenched with blood. He still had the daggers in his hands. His eyes seem dreadful. I can tell he felt a heavy amount of guilt on his back. He was always on the weaker side after all. I told him to put the daggers back, he didn’t listen, nor did he move. I took the daggers from him and put them back myself.

The more I realized how far we’ve come, and how close we are to royalty, the more frustrated I got with Macbeth. he can ruin everything if someone notices his behavior. Ross, Lenox, lords and a few others are in our palace. I saw Macbeth talking to the killers behind Banquo’s death. I couldn’t believe that Macbeth was capable of ending Banquo’s life. Meanwhile everyone was eating, I tried to be a nice hostess for everyone in the palace. Being polite and didn’t interrupt any of their conversations.

Out of nowhere, I hear Macbeth saying “Which of you have done this”. Everyone was shocked, including myself. Ross told his men to leave because he was worried about Macbeth’s health conditions. I had to intervene. It seemed like I was fixing macbeth’s mistakes constantly these past few days. it’s getting more and more irritating Everyday, I’ve had a healthy amount of sleep, but I still feel tired. i’ve also noticed that my maid looks at me with fear. The look in her eyes shows pity. One memory which keeps haunting me in my sleep, is washing Duncan’s blood off of my hands.

I am not so sure why I feel this traumatic guilt now. Why didn’t I feel this before? I feel constant fear, the guilt is finally catching up to me. No one can help me now. Not even Macbeth. He is just as mad as me. I feel like it’s my fault he became as deranged as he is now. If only I hadn’t pushed him to kill Duncan, maybe things would have ended differently. I miss his kind side. But I know I will never see that side of him again. I feel many emotions at once, but I also feel great emptiness. like a dark abyss. I know that there is not much time left. I will fall, so will Macbeth, and so will our dream.

The Macbeth And Banquo. (2022, Apr 10). Retrieved from https://papersowl.com/examples/the-macbeth-and-banquo/