How Software Engineering and Nanotechnology Can be Related 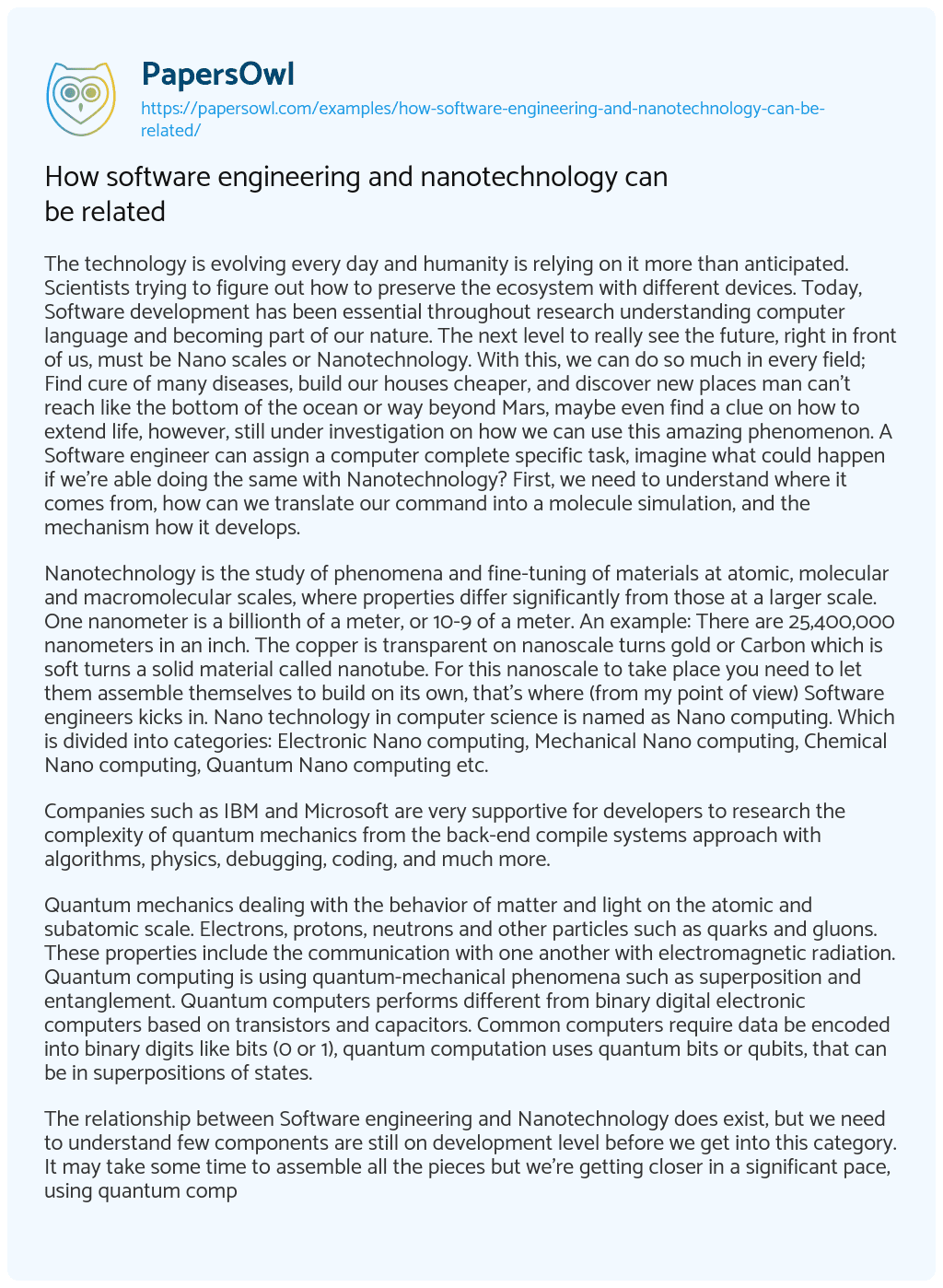 The technology is evolving every day and humanity is relying on it more than anticipated. Scientists trying to figure out how to preserve the ecosystem with different devices. Today, Software development has been essential throughout research understanding computer language and becoming part of our nature. The next level to really see the future, right in front of us, must be Nano scales or Nanotechnology. With this, we can do so much in every field; Find cure of many diseases, build our houses cheaper, and discover new places man can’t reach like the bottom of the ocean or way beyond Mars, maybe even find a clue on how to extend life, however, still under investigation on how we can use this amazing phenomenon. A Software engineer can assign a computer complete specific task, imagine what could happen if we’re able doing the same with Nanotechnology? First, we need to understand where it comes from, how can we translate our command into a molecule simulation, and the mechanism how it develops.

Nanotechnology is the study of phenomena and fine-tuning of materials at atomic, molecular and macromolecular scales, where properties differ significantly from those at a larger scale. One nanometer is a billionth of a meter, or 10-9 of a meter. An example: There are 25,400,000 nanometers in an inch. The copper is transparent on nanoscale turns gold or Carbon which is soft turns a solid material called nanotube. For this nanoscale to take place you need to let them assemble themselves to build on its own, that’s where (from my point of view) Software engineers kicks in. Nano technology in computer science is named as Nano computing. Which is divided into categories: Electronic Nano computing, Mechanical Nano computing, Chemical Nano computing, Quantum Nano computing etc.

Companies such as IBM and Microsoft are very supportive for developers to research the complexity of quantum mechanics from the back-end compile systems approach with algorithms, physics, debugging, coding, and much more.

Quantum mechanics dealing with the behavior of matter and light on the atomic and subatomic scale. Electrons, protons, neutrons and other particles such as quarks and gluons. These properties include the communication with one another with electromagnetic radiation. Quantum computing is using quantum-mechanical phenomena such as superposition and entanglement. Quantum computers performs different from binary digital electronic computers based on transistors and capacitors. Common computers require data be encoded into binary digits like bits (0 or 1), quantum computation uses quantum bits or qubits, that can be in superpositions of states.

The relationship between Software engineering and Nanotechnology does exist, but we need to understand few components are still on development level before we get into this category. It may take some time to assemble all the pieces but we’re getting closer in a significant pace, using quantum computing term could be the key. I’m sure there is more tools we can explore to solve this puzzle, as computer scientists who are interested in the field of nanotechnology, our future works is to build a system that consists of a large number of particles automatically forming into a designed structure. By using the algorithm to control the swarm of particles, each particle performs lightweight computations and holds only a few values. It is anticipated that models such as these will lead to successful bottom-up nanotechnology systems in the future.

How software engineering and nanotechnology can be related. (2021, Oct 17). Retrieved from https://papersowl.com/examples/how-software-engineering-and-nanotechnology-can-be-related/

Anomaly Detection Software on the Ground