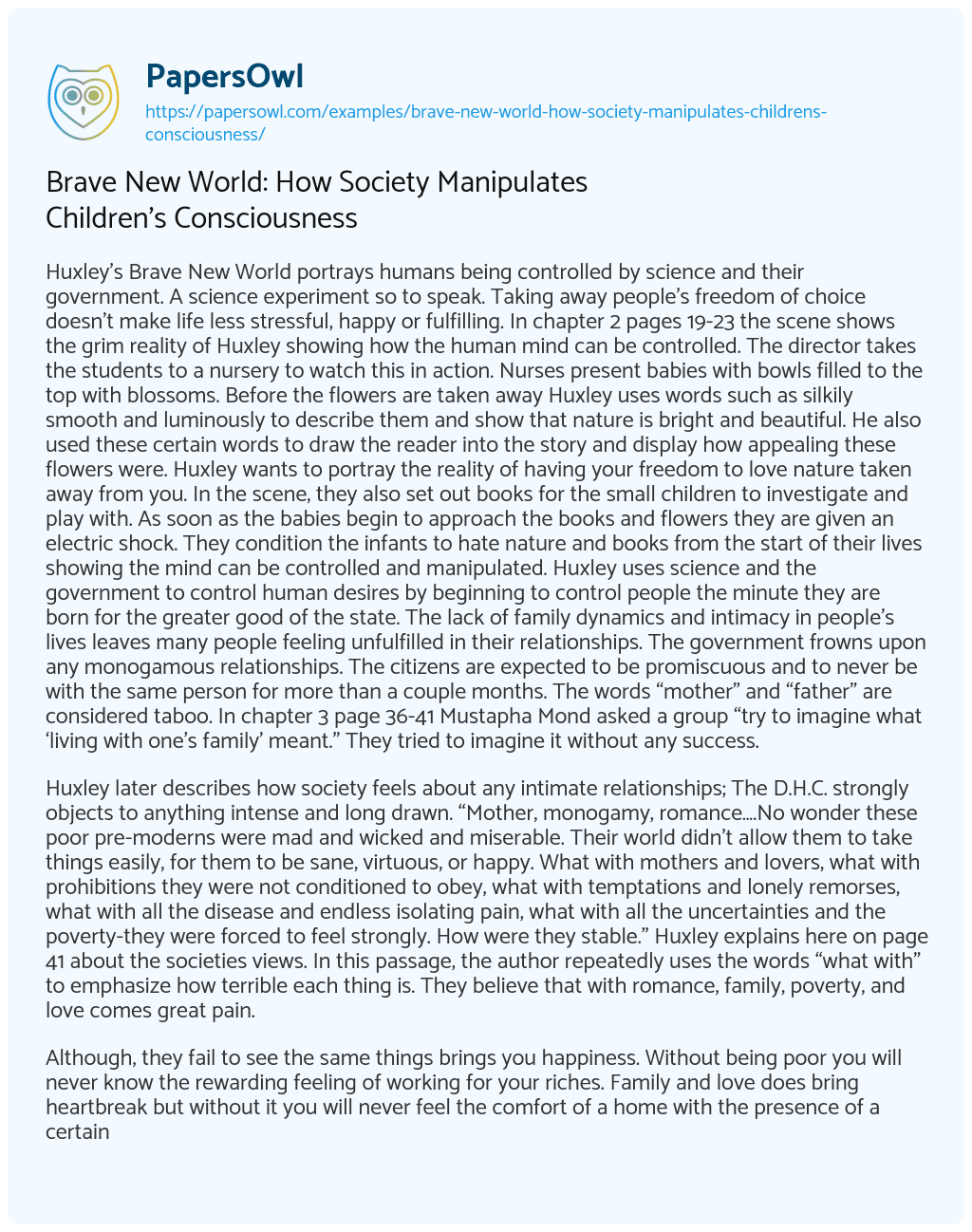 Huxley’s Brave New World portrays humans being controlled by science and their government. A science experiment so to speak. Taking away people’s freedom of choice doesn’t make life less stressful, happy or fulfilling. In chapter 2 pages 19-23 the scene shows the grim reality of Huxley showing how the human mind can be controlled. The director takes the students to a nursery to watch this in action. Nurses present babies with bowls filled to the top with blossoms. Before the flowers are taken away Huxley uses words such as silkily smooth and luminously to describe them and show that nature is bright and beautiful. He also used these certain words to draw the reader into the story and display how appealing these flowers were. Huxley wants to portray the reality of having your freedom to love nature taken away from you. In the scene, they also set out books for the small children to investigate and play with. As soon as the babies begin to approach the books and flowers they are given an electric shock. They condition the infants to hate nature and books from the start of their lives showing the mind can be controlled and manipulated. Huxley uses science and the government to control human desires by beginning to control people the minute they are born for the greater good of the state. The lack of family dynamics and intimacy in people’s lives leaves many people feeling unfulfilled in their relationships. The government frowns upon any monogamous relationships. The citizens are expected to be promiscuous and to never be with the same person for more than a couple months. The words “mother” and “father” are considered taboo. In chapter 3 page 36-41 Mustapha Mond asked a group “try to imagine what ‘living with one’s family’ meant.” They tried to imagine it without any success.

Huxley later describes how society feels about any intimate relationships; The D.H.C. strongly objects to anything intense and long drawn. “Mother, monogamy, romance….No wonder these poor pre-moderns were mad and wicked and miserable. Their world didn’t allow them to take things easily, for them to be sane, virtuous, or happy. What with mothers and lovers, what with prohibitions they were not conditioned to obey, what with temptations and lonely remorses, what with all the disease and endless isolating pain, what with all the uncertainties and the poverty-they were forced to feel strongly. How were they stable.” Huxley explains here on page 41 about the societies views. In this passage, the author repeatedly uses the words “what with” to emphasize how terrible each thing is. They believe that with romance, family, poverty, and love comes great pain.

Although, they fail to see the same things brings you happiness. Without being poor you will never know the rewarding feeling of working for your riches. Family and love does bring heartbreak but without it you will never feel the comfort of a home with the presence of a certain loved one. People you build healthy relationships with can make you happy even in your darkest moments. The dystopia wants everyone to “take things easily” so no one has to go through hard times but without life getting tough sometimes you will never fully appreciate happiness when you possess it. If I was given the chance to create a performance art to any scene I’d choose the scene where the author shows how the society controlled and conditioned infants minds with shock therapy.

My art choice would be dance. I’d have my cast only consist of children. I want to show how society can manipulate and control kids minds at a young age to fall into societies standards. The performance would begin with everyone together in a tightly squished group with their arms around each other and their chests pointing towards the ceiling to show that their invulnerable and strong when they stand together. Then, they will all urgently disperse into groups on the outer sides of the stage leaving one child standing lonely in the middle. She will dance close to each group with flowy/retracting movements getting closer and further from each group. As she starts reaching for each group, one person from every group will close their fist around her arm until she pries herself away. She will persist dancing closer and farther from each group slowly sinking to the ground. Her body will become weak trying to reach for everyone around her. I want to show that she is confused on which group to choose and doesn’t feel like she belongs to just one.

The groups surrounding her will simultaneously start frantically stomping causing her whole body to tremble. Each group comes to center stage and grabs her limbs. Each group trying to drag her closer to them. The society in the book is portrayed in the groups. Every group is forcing there societies expectations into her. To end my dance one group will drag her to their corner of the stage. The group and the girl will all start walking around the stage. The young girl’s body will be slouched with her head down as they march together off the stage. I like this to be my ending because as she obeys societies expectations she doesn’t feel true to herself leaving her unhappy.

Comparison of Characters between Brave New World and Fahrenheit 451