School Shootings as a Serious Social Problem in America 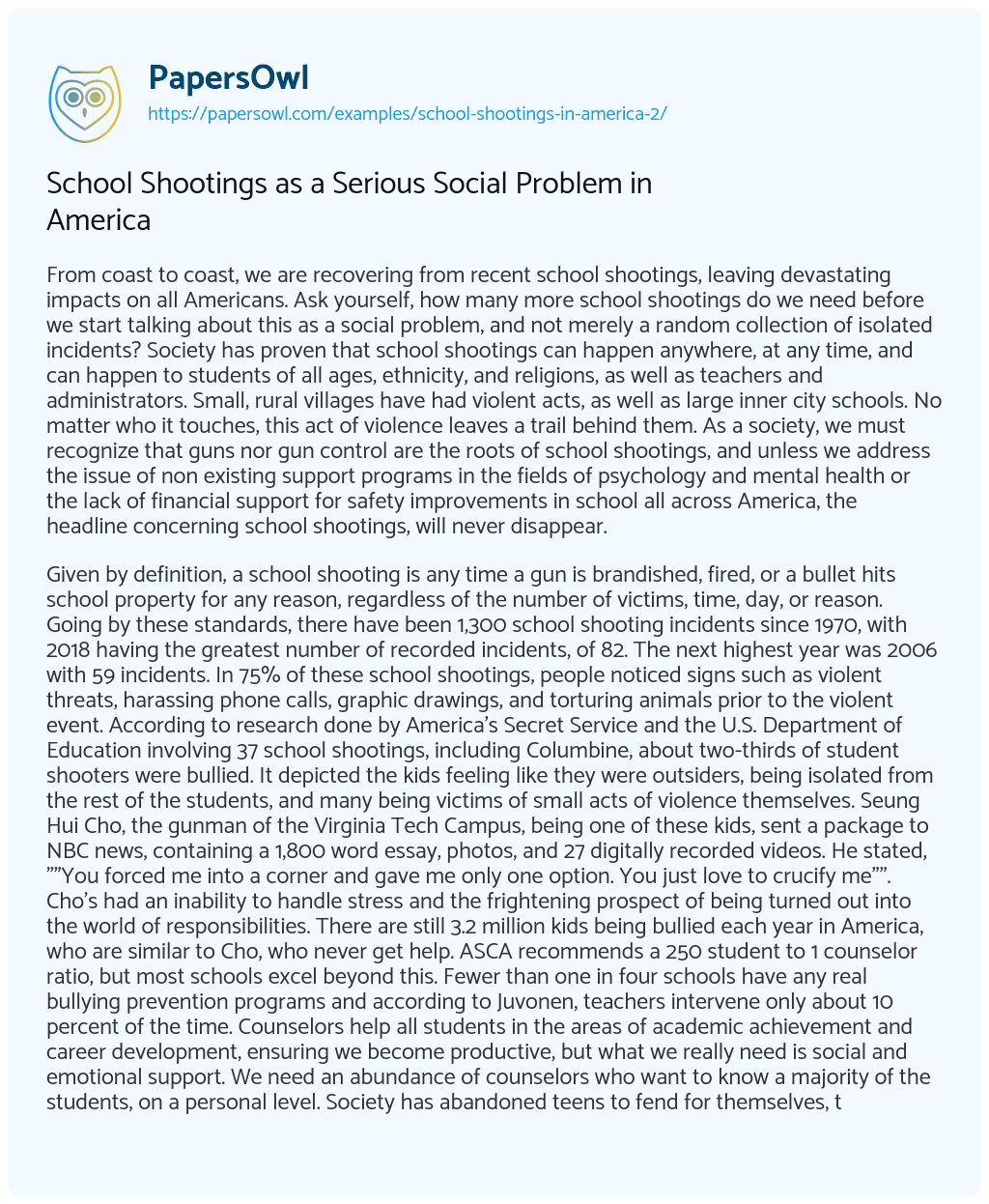 From coast to coast, we are recovering from recent school shootings, leaving devastating impacts on all Americans. Ask yourself, how many more school shootings do we need before we start talking about this as a social problem, and not merely a random collection of isolated incidents? Society has proven that school shootings can happen anywhere, at any time, and can happen to students of all ages, ethnicity, and religions, as well as teachers and administrators. Small, rural villages have had violent acts, as well as large inner city schools. No matter who it touches, this act of violence leaves a trail behind them. As a society, we must recognize that guns nor gun control are the roots of school shootings, and unless we address the issue of non existing support programs in the fields of psychology and mental health or the lack of financial support for safety improvements in school all across America, the headline concerning school shootings, will never disappear.

Given by definition, a school shooting is any time a gun is brandished, fired, or a bullet hits school property for any reason, regardless of the number of victims, time, day, or reason. Going by these standards, there have been 1,300 school shooting incidents since 1970, with 2018 having the greatest number of recorded incidents, of 82. The next highest year was 2006 with 59 incidents. In 75% of these school shootings, people noticed signs such as violent threats, harassing phone calls, graphic drawings, and torturing animals prior to the violent event. According to research done by America’s Secret Service and the U.S. Department of Education involving 37 school shootings, including Columbine, about two-thirds of student shooters were bullied. It depicted the kids feeling like they were outsiders, being isolated from the rest of the students, and many being victims of small acts of violence themselves. Seung Hui Cho, the gunman of the Virginia Tech Campus, being one of these kids, sent a package to NBC news, containing a 1,800 word essay, photos, and 27 digitally recorded videos. He stated, “”You forced me into a corner and gave me only one option. You just love to crucify me””. Cho’s had an inability to handle stress and the frightening prospect of being turned out into the world of responsibilities. There are still 3.2 million kids being bullied each year in America, who are similar to Cho, who never get help. ASCA recommends a 250 student to 1 counselor ratio, but most schools excel beyond this. Fewer than one in four schools have any real bullying prevention programs and according to Juvonen, teachers intervene only about 10 percent of the time. Counselors help all students in the areas of academic achievement and career development, ensuring we become productive, but what we really need is social and emotional support. We need an abundance of counselors who want to know a majority of the students, on a personal level. Society has abandoned teens to fend for themselves, telling them we live in a country that cares more about guns than children. Federeick Douglas once said “”It is easier to build strong children than to repair broken men.”” We must start by protecing and supporting the minds of innocent youth, before the evil of the world gets to them, because by then, it is too late.

Despite the convicing evidence of bullying being a major cause, most people want to blame guns and gun laws, but what will happen of we do change these laws? For example, what if we get rid of guns that fire fast or don’t have as big a magazine? Yes, fewer people will die, but this shows we don’t want to see the real problem, we don’t want to tackle the hard problem. We are willing to limit and change a right, not even to keep people from dying, but just so that fewer will die. “”The only thing that stops a bad guy with a gun is a good guy with a gun,”” Wayne LaPierre of the National Rifle Association (N.R.A.), the country’s most powerful gun-rights group, famously said in 2012. The liklihood of someone carrying a handgun in a crowded room is high, due to the spread of concealed handgun licensing laws, now in 40 out of 50 states. Schools are one of the few places where the government has guaranteed that there will be none or few licensed and trained adults with a concealed firearm.

A school shooting on average lasts 5 minutes, but have you ever thought what those few minutes could imprint on a person forever, from physical to psychological effects. How about Steve Cobenais, who has a traumatic brain injury resulting in epileptic seizures? Chon Gai La, having violent nightmares or Chris Reynolds becoming consumed in guilt? Or Anne Hocchalter, who is spending the rest of her life in a wheelchair? Reading this, it is clear we know what we want less of, but what do we want more of? What do we want to create? We are apart of the solution, not just the problem. It’s about preserving a young person’s confidence and this country we call home, rather than just preventing death. For one, we have a need, not just a want of additional security. The mass shooting at a South Florida high school, consisting of Nikolas Cruz, killing 17 people and injuring many more, exposed the ways in which certain security measures can fail short. Cruz managed to get onto the school’s campus because the gates surrounding the campus were open to let school buses in ahead of dismissal, and once inside many locks allegedly didn’t keep students safe as Cruz managed to break through and shoot into classrooms. After hearing this, Justin Rivard, a senior at Somerset High School was inspired in his shop class to create a device called the “”JustinKase””, a device made of steel plates and connecting rods that is placed under a classroom door where it latches to the door jamb. Rivard, who is joining the Army when he graduates, said “”You can lock a door with a lock, it can get shot out, but you can lock a door with this, and it can’t get shot out. You can’t get around it.”” Another obstacle you can not get around is layers of zoning and locked doors. School entrances should function more like banks, consisting of hallways and entrances being designed to easily spot who is moving around a school, and be organized as such that they can be locked or closed off if needed. For example, even if the intruder gets past the front entrance, the intruder should have a hard time moving through the school itself, having to go through many locked doors. Despite this, when an active shooter is on a school campus, it’s important for teachers and students to have a refuge to escape to, such as concrete safe rooms, so that bullets cannot penetrate them even if fired by an automatic weapon. Many argue that with metal detectors, weapons would never get past the front doors. To keep airports safe from armed terrorists, we install metal detectors that dramatically increased safety, and it’s time we did the same thing for our schools. However, all these methods can be costly and most schools do not have enough funds to benefit from these devises. The real question is, how much are our lives worth?

As a society, we must recognize that guns nor gun control are the roots of school shootings, and unless we address the issue of non existing support programs in the fields of psychology and mental health or the lack of financial support for safety improvements in school all across America, the headline concerning school shootings, will never disappear. Four out of five shootings depict children shooting children. Doesn’t that say enough? We need to place more emphasis on preventing shootings rather than preparing for them.

School Shootings as a Serious Social Problem in America. (2019, Jul 24). Retrieved from https://papersowl.com/examples/school-shootings-in-america-2/

Is Arming Teachers Really the Best Solution to School Shootings?