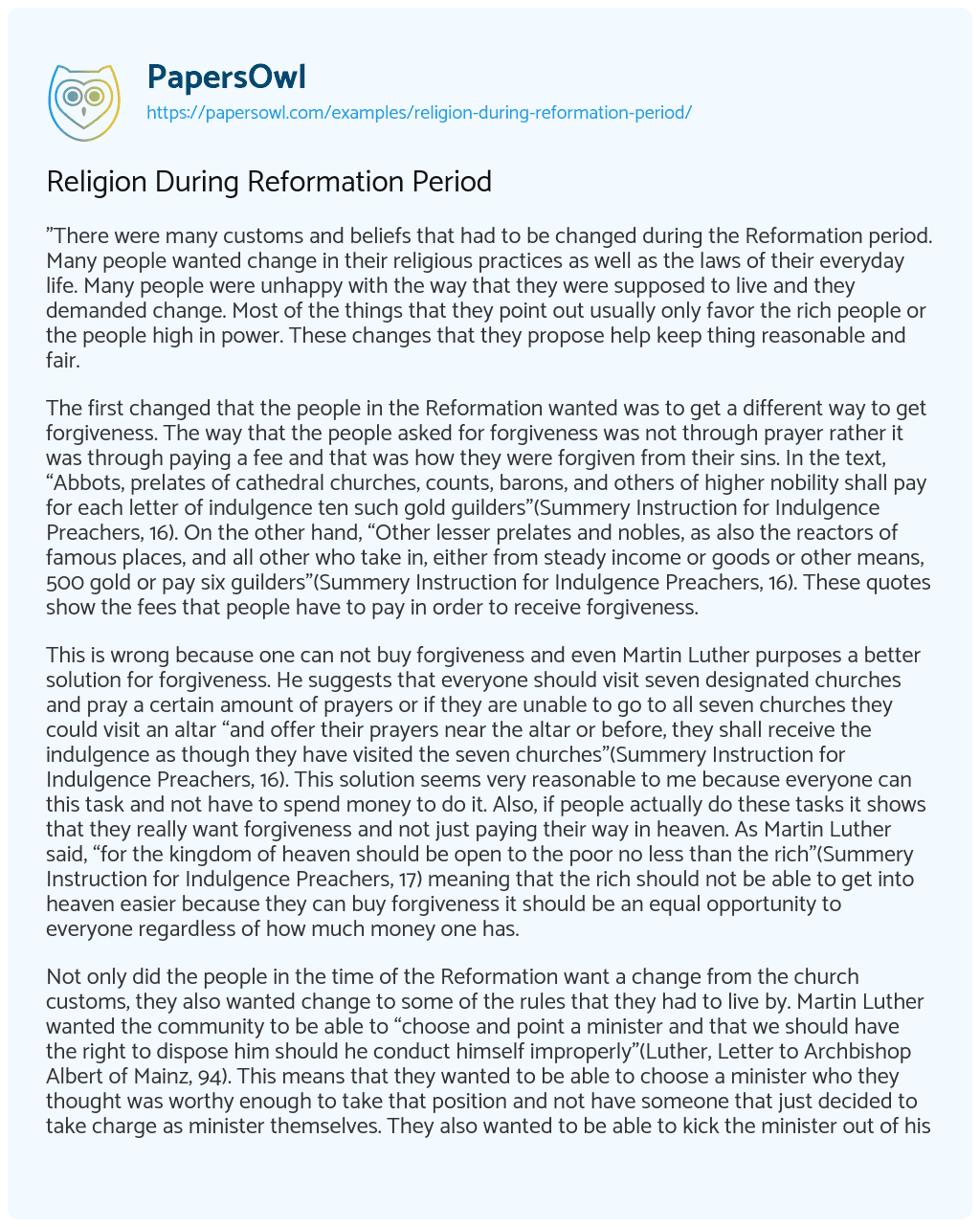 “There were many customs and beliefs that had to be changed during the Reformation period. Many people wanted change in their religious practices as well as the laws of their everyday life. Many people were unhappy with the way that they were supposed to live and they demanded change. Most of the things that they point out usually only favor the rich people or the people high in power. These changes that they propose help keep thing reasonable and fair.

The first changed that the people in the Reformation wanted was to get a different way to get forgiveness. The way that the people asked for forgiveness was not through prayer rather it was through paying a fee and that was how they were forgiven from their sins. In the text, “Abbots, prelates of cathedral churches, counts, barons, and others of higher nobility shall pay for each letter of indulgence ten such gold guilders”(Summery Instruction for Indulgence Preachers, 16). On the other hand, “Other lesser prelates and nobles, as also the reactors of famous places, and all other who take in, either from steady income or goods or other means, 500 gold or pay six guilders”(Summery Instruction for Indulgence Preachers, 16). These quotes show the fees that people have to pay in order to receive forgiveness.

This is wrong because one can not buy forgiveness and even Martin Luther purposes a better solution for forgiveness. He suggests that everyone should visit seven designated churches and pray a certain amount of prayers or if they are unable to go to all seven churches they could visit an altar “and offer their prayers near the altar or before, they shall receive the indulgence as though they have visited the seven churches”(Summery Instruction for Indulgence Preachers, 16). This solution seems very reasonable to me because everyone can this task and not have to spend money to do it. Also, if people actually do these tasks it shows that they really want forgiveness and not just paying their way in heaven. As Martin Luther said, “for the kingdom of heaven should be open to the poor no less than the rich”(Summery Instruction for Indulgence Preachers, 17) meaning that the rich should not be able to get into heaven easier because they can buy forgiveness it should be an equal opportunity to everyone regardless of how much money one has.

Not only did the people in the time of the Reformation want a change from the church customs, they also wanted change to some of the rules that they had to live by. Martin Luther wanted the community to be able to “choose and point a minister and that we should have the right to dispose him should he conduct himself improperly”(Luther, Letter to Archbishop Albert of Mainz, 94). This means that they wanted to be able to choose a minister who they thought was worthy enough to take that position and not have someone that just decided to take charge as minister themselves. They also wanted to be able to kick the minister out of his position of power if the people didn’t think he was doing his job correctly. Also, he states that “It has been the custom heretofore for men to hold us as their own property, which is pitiable enough considering that Christ has redeemed and purchased us without expectation…”(Luther, Letter to Archbishop Albert of Mainz, 95).

What Martin Luther is saying is that it does not make sense that there is still slavery if no one can own anyone due to the fact that Jesus “bought” us by getting crucified so, the only person we belong to is Jesus. He also states that his people are “burdened by holdings that cannot support the rent exacted from them”(Luther, Letter to Archbishop Albert of Mainz, 96). What he asks is for people who are trustworthy to inspect the holdings and adjust the rent to something that actually is reasonable and that leaves the workers with some money. He wants them to adjust the holdings so that way they are not working for no money since all of the money they earn is going to extremely high rent costs.

During the time of reformation, there were many customs of the people’s religion that they wanted to change. There were also many state rules that people wanted to change. They wanted to change many rules because they did not seem fair and tended to only favor the people who were rich or in power. Many people were unhappy about these customs and rules so, they demanded change to help make things fair for everyone regardless of how much money one had or high up in power one was.”

Reformation was Mostly about Religion