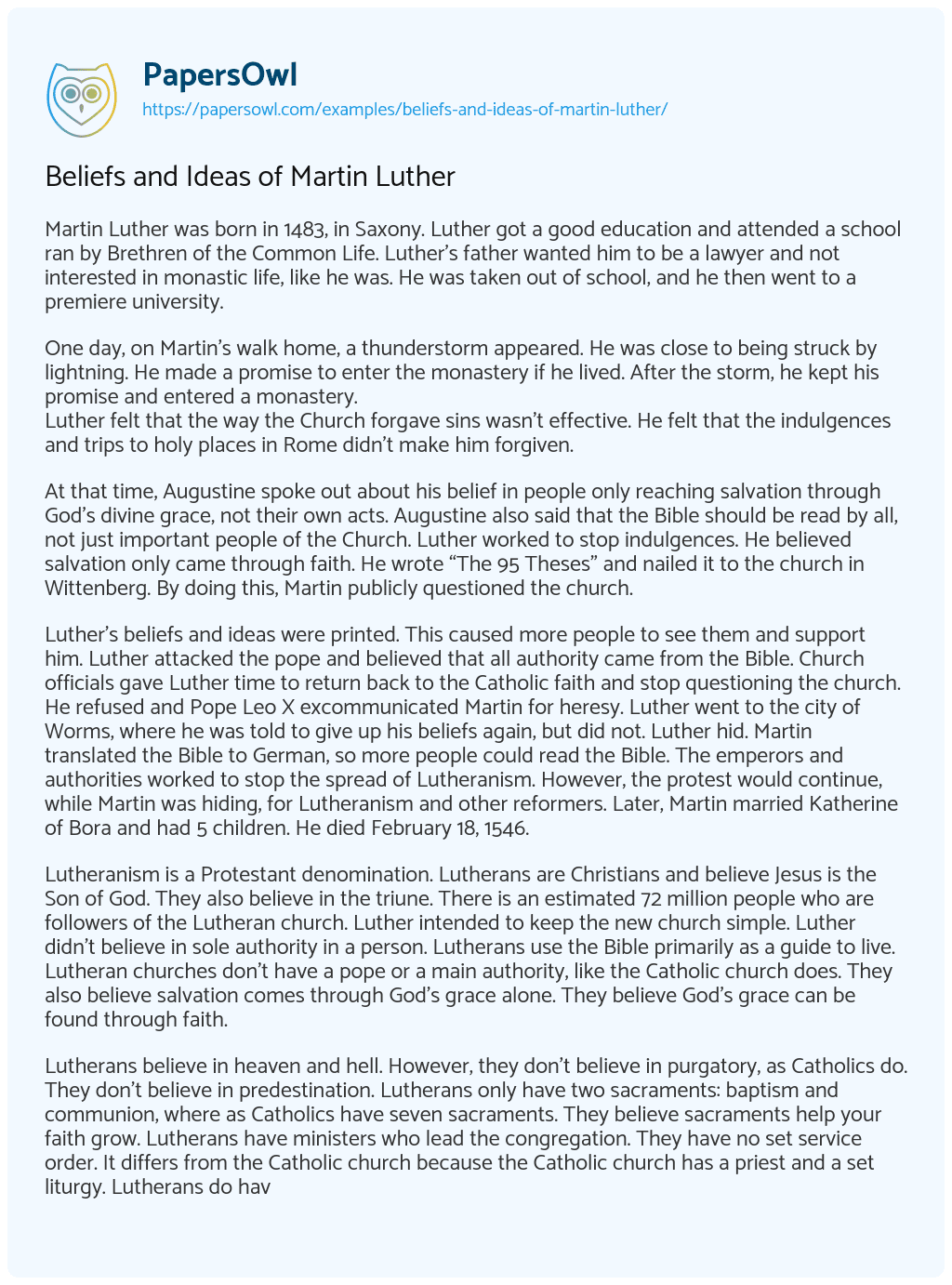 Martin Luther was born in 1483, in Saxony. Luther got a good education and attended a school ran by Brethren of the Common Life. Luther’s father wanted him to be a lawyer and not interested in monastic life, like he was. He was taken out of school, and he then went to a premiere university.

One day, on Martin’s walk home, a thunderstorm appeared. He was close to being struck by lightning. He made a promise to enter the monastery if he lived. After the storm, he kept his promise and entered a monastery.
Luther felt that the way the Church forgave sins wasn’t effective. He felt that the indulgences and trips to holy places in Rome didn’t make him forgiven.

At that time, Augustine spoke out about his belief in people only reaching salvation through God’s divine grace, not their own acts. Augustine also said that the Bible should be read by all, not just important people of the Church. Luther worked to stop indulgences. He believed salvation only came through faith. He wrote “The 95 Theses” and nailed it to the church in Wittenberg. By doing this, Martin publicly questioned the church.

Luther’s beliefs and ideas were printed. This caused more people to see them and support him. Luther attacked the pope and believed that all authority came from the Bible. Church officials gave Luther time to return back to the Catholic faith and stop questioning the church. He refused and Pope Leo X excommunicated Martin for heresy. Luther went to the city of Worms, where he was told to give up his beliefs again, but did not. Luther hid. Martin translated the Bible to German, so more people could read the Bible. The emperors and authorities worked to stop the spread of Lutheranism. However, the protest would continue, while Martin was hiding, for Lutheranism and other reformers. Later, Martin married Katherine of Bora and had 5 children. He died February 18, 1546.

Lutheranism is a Protestant denomination. Lutherans are Christians and believe Jesus is the Son of God. They also believe in the triune. There is an estimated 72 million people who are followers of the Lutheran church. Luther intended to keep the new church simple. Luther didn’t believe in sole authority in a person. Lutherans use the Bible primarily as a guide to live. Lutheran churches don’t have a pope or a main authority, like the Catholic church does. They also believe salvation comes through God’s grace alone. They believe God’s grace can be found through faith.

Martin Luther spoke out about his beliefs. He created division within the church and started the Lutheran church. The creation of this new church led others to follow in his way and create more new churches. Martin Luther changed the way life would be forever.

Beliefs and Ideas of Martin Luther. (2021, May 10). Retrieved from https://papersowl.com/examples/beliefs-and-ideas-of-martin-luther/