Becoming a Monk of Martin Luther 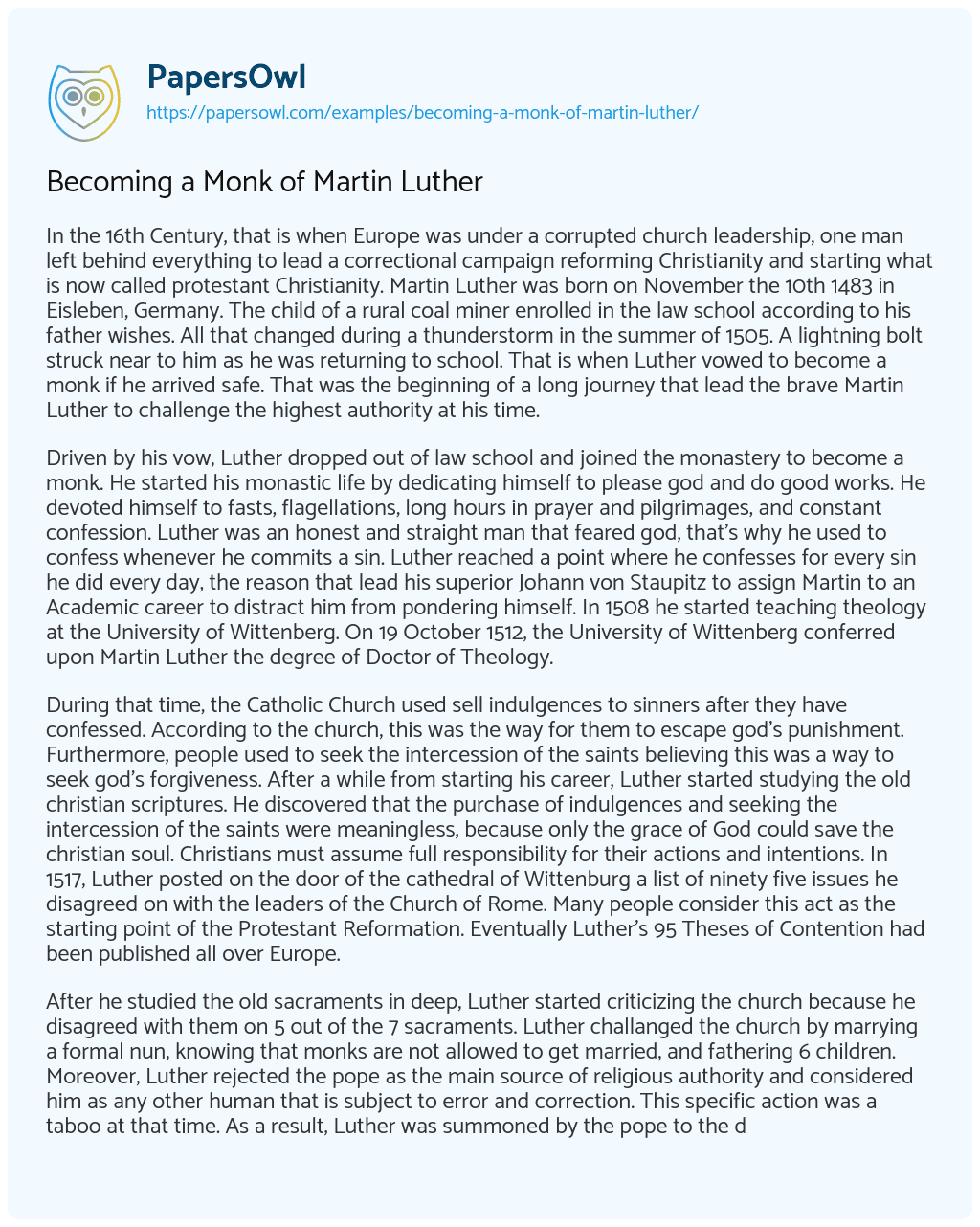 In the 16th Century, that is when Europe was under a corrupted church leadership, one man left behind everything to lead a correctional campaign reforming Christianity and starting what is now called protestant Christianity. Martin Luther was born on November the 10th 1483 in Eisleben, Germany. The child of a rural coal miner enrolled in the law school according to his father wishes. All that changed during a thunderstorm in the summer of 1505. A lightning bolt struck near to him as he was returning to school. That is when Luther vowed to become a monk if he arrived safe. That was the beginning of a long journey that lead the brave Martin Luther to challenge the highest authority at his time.

Driven by his vow, Luther dropped out of law school and joined the monastery to become a monk. He started his monastic life by dedicating himself to please god and do good works. He devoted himself to fasts, flagellations, long hours in prayer and pilgrimages, and constant confession. Luther was an honest and straight man that feared god, that’s why he used to confess whenever he commits a sin. Luther reached a point where he confesses for every sin he did every day, the reason that lead his superior Johann von Staupitz to assign Martin to an Academic career to distract him from pondering himself. In 1508 he started teaching theology at the University of Wittenberg. On 19 October 1512, the University of Wittenberg conferred upon Martin Luther the degree of Doctor of Theology.

During that time, the Catholic Church used sell indulgences to sinners after they have confessed. According to the church, this was the way for them to escape god’s punishment. Furthermore, people used to seek the intercession of the saints believing this was a way to seek god’s forgiveness. After a while from starting his career, Luther started studying the old christian scriptures. He discovered that the purchase of indulgences and seeking the intercession of the saints were meaningless, because only the grace of God could save the christian soul. Christians must assume full responsibility for their actions and intentions. In 1517, Luther posted on the door of the cathedral of Wittenburg a list of ninety five issues he disagreed on with the leaders of the Church of Rome. Many people consider this act as the starting point of the Protestant Reformation. Eventually Luther’s 95 Theses of Contention had been published all over Europe.

After he studied the old sacraments in deep, Luther started criticizing the church because he disagreed with them on 5 out of the 7 sacraments. Luther challanged the church by marrying a formal nun, knowing that monks are not allowed to get married, and fathering 6 children. Moreover, Luther rejected the pope as the main source of religious authority and considered him as any other human that is subject to error and correction. This specific action was a taboo at that time. As a result, Luther was summoned by the pope to the diet of worms, an imperial assembly of the Holy Roman Empire held in a city called Worms located in Germany. The assembly presented Luther with a table filled with his writings asking him if he still believed in what these books taught. That’s when Luther said his famous phrase “Unless I am convinced by proofs from Scriptures or by plain and clear reasons and arguments, I can’t and will not retract, for it is neither safe nor wise to do anything against conscience. Here I stand. I can do no other. God help me. Amen.”

Afterwards, Martin Luther was considered as an outlaw and was exiled. Due to his powerful relations in Germany, a German prince arranged for Luther to be seized to the castle of the Wartburg where he stayed for a year and was able to translate the bible from ancient Greek to German so that all people can read and understand it. Luther’s writing lead to the “peasants’ revolt” which is a war that lasted 25 years until it was decided by the church that every prince have the right to choose the religion to be practiced in his domain.

Martin Luther died on 18th febraury 1546 by a heart attack and his last words were “When I die, I want to be a ghost…So I can continue to pester the bishops, priests and godless monks until that they have more trouble with a dead Luther than they could have had before with a thousand living ones.”

Becoming a Monk of Martin Luther. (2021, Jul 01). Retrieved from https://papersowl.com/examples/becoming-a-monk-of-martin-luther/