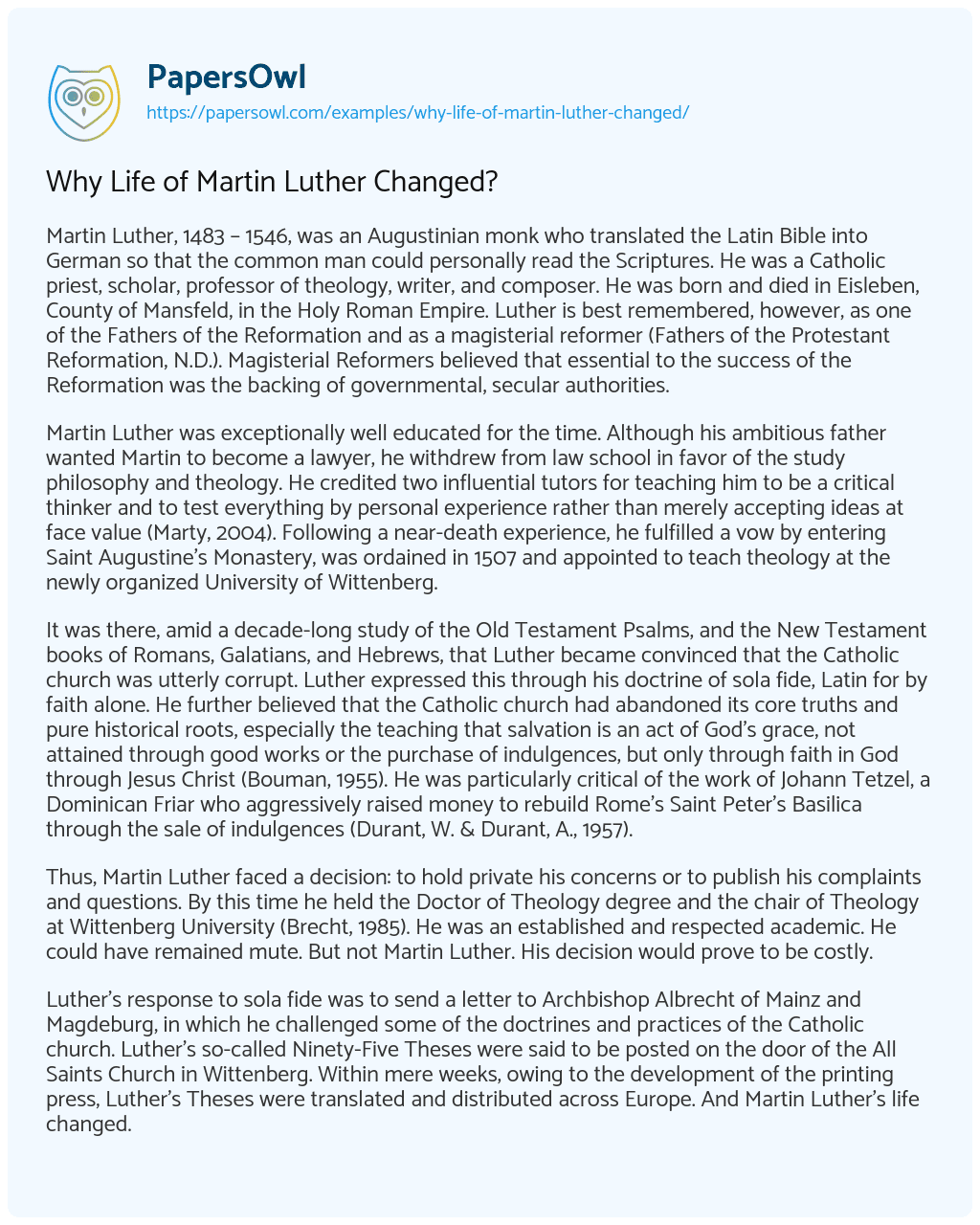 Martin Luther, 1483 – 1546, was an Augustinian monk who translated the Latin Bible into German so that the common man could personally read the Scriptures. He was a Catholic priest, scholar, professor of theology, writer, and composer. He was born and died in Eisleben, County of Mansfeld, in the Holy Roman Empire. Luther is best remembered, however, as one of the Fathers of the Reformation and as a magisterial reformer (Fathers of the Protestant Reformation, N.D.). Magisterial Reformers believed that essential to the success of the Reformation was the backing of governmental, secular authorities.

Martin Luther was exceptionally well educated for the time. Although his ambitious father wanted Martin to become a lawyer, he withdrew from law school in favor of the study philosophy and theology. He credited two influential tutors for teaching him to be a critical thinker and to test everything by personal experience rather than merely accepting ideas at face value (Marty, 2004). Following a near-death experience, he fulfilled a vow by entering Saint Augustine’s Monastery, was ordained in 1507 and appointed to teach theology at the newly organized University of Wittenberg.

It was there, amid a decade-long study of the Old Testament Psalms, and the New Testament books of Romans, Galatians, and Hebrews, that Luther became convinced that the Catholic church was utterly corrupt. Luther expressed this through his doctrine of sola fide, Latin for by faith alone. He further believed that the Catholic church had abandoned its core truths and pure historical roots, especially the teaching that salvation is an act of God’s grace, not attained through good works or the purchase of indulgences, but only through faith in God through Jesus Christ (Bouman, 1955). He was particularly critical of the work of Johann Tetzel, a Dominican Friar who aggressively raised money to rebuild Rome’s Saint Peter’s Basilica through the sale of indulgences (Durant, W. & Durant, A., 1957).

Thus, Martin Luther faced a decision: to hold private his concerns or to publish his complaints and questions. By this time he held the Doctor of Theology degree and the chair of Theology at Wittenberg University (Brecht, 1985). He was an established and respected academic. He could have remained mute. But not Martin Luther. His decision would prove to be costly.

Luther’s response to sola fide was to send a letter to Archbishop Albrecht of Mainz and Magdeburg, in which he challenged some of the doctrines and practices of the Catholic church. Luther’s so-called Ninety-Five Theses were said to be posted on the door of the All Saints Church in Wittenberg. Within mere weeks, owing to the development of the printing press, Luther’s Theses were translated and distributed across Europe. And Martin Luther’s life changed.

Why Life of Martin Luther Changed?. (2021, Jul 01). Retrieved from https://papersowl.com/examples/why-life-of-martin-luther-changed/

Becoming a Monk of Martin Luther