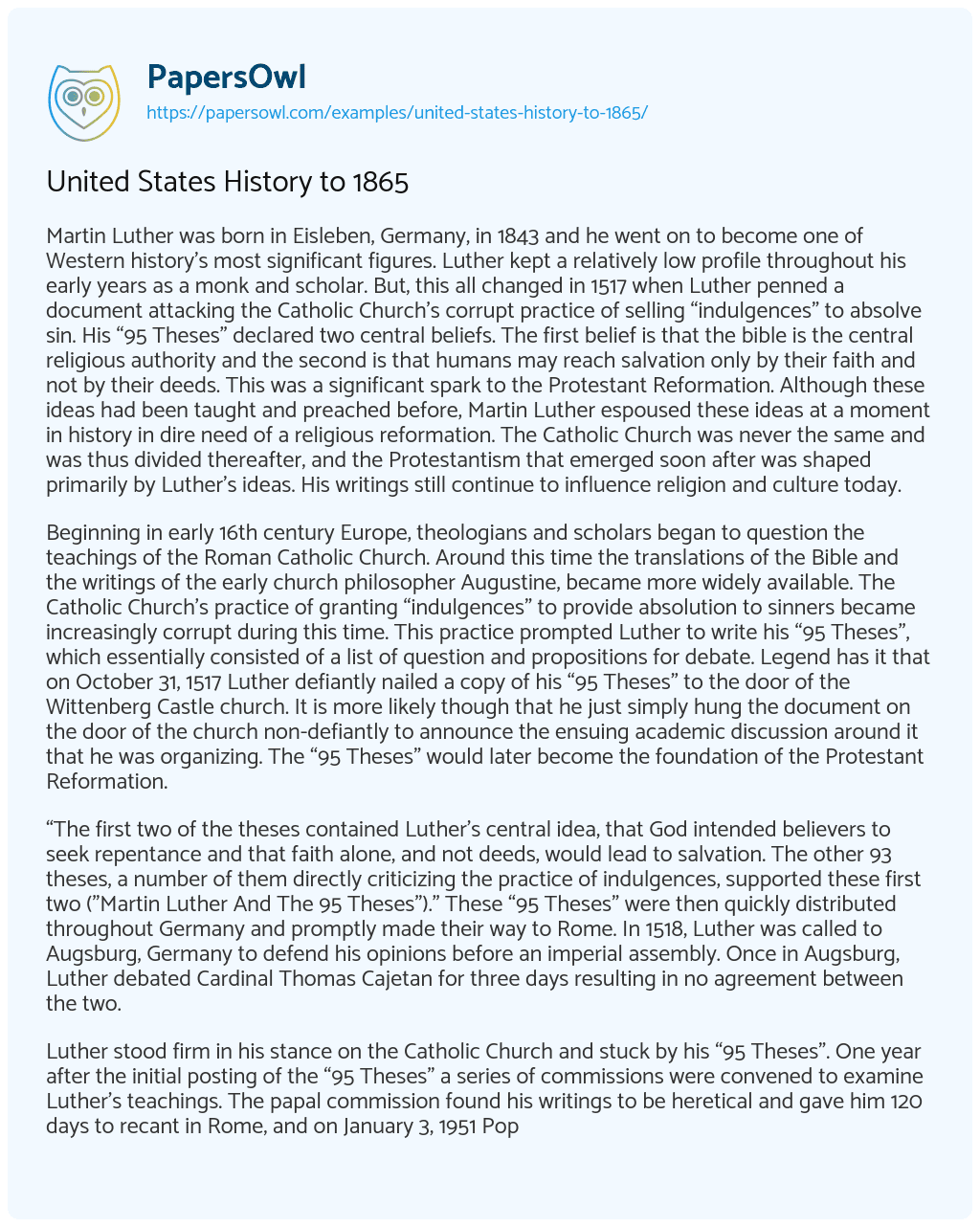 Martin Luther was born in Eisleben, Germany, in 1843 and he went on to become one of Western history’s most significant figures. Luther kept a relatively low profile throughout his early years as a monk and scholar. But, this all changed in 1517 when Luther penned a document attacking the Catholic Church’s corrupt practice of selling “indulgences” to absolve sin. His “95 Theses” declared two central beliefs. The first belief is that the bible is the central religious authority and the second is that humans may reach salvation only by their faith and not by their deeds. This was a significant spark to the Protestant Reformation. Although these ideas had been taught and preached before, Martin Luther espoused these ideas at a moment in history in dire need of a religious reformation. The Catholic Church was never the same and was thus divided thereafter, and the Protestantism that emerged soon after was shaped primarily by Luther’s ideas. His writings still continue to influence religion and culture today.

Beginning in early 16th century Europe, theologians and scholars began to question the teachings of the Roman Catholic Church. Around this time the translations of the Bible and the writings of the early church philosopher Augustine, became more widely available. The Catholic Church’s practice of granting “indulgences” to provide absolution to sinners became increasingly corrupt during this time. This practice prompted Luther to write his “95 Theses”, which essentially consisted of a list of question and propositions for debate. Legend has it that on October 31, 1517 Luther defiantly nailed a copy of his “95 Theses” to the door of the Wittenberg Castle church. It is more likely though that he just simply hung the document on the door of the church non-defiantly to announce the ensuing academic discussion around it that he was organizing. The “95 Theses” would later become the foundation of the Protestant Reformation.

“The first two of the theses contained Luther’s central idea, that God intended believers to seek repentance and that faith alone, and not deeds, would lead to salvation. The other 93 theses, a number of them directly criticizing the practice of indulgences, supported these first two (“Martin Luther And The 95 Theses”).” These “95 Theses” were then quickly distributed throughout Germany and promptly made their way to Rome. In 1518, Luther was called to Augsburg, Germany to defend his opinions before an imperial assembly. Once in Augsburg, Luther debated Cardinal Thomas Cajetan for three days resulting in no agreement between the two.

Luther stood firm in his stance on the Catholic Church and stuck by his “95 Theses”. One year after the initial posting of the “95 Theses” a series of commissions were convened to examine Luther’s teachings. The papal commission found his writings to be heretical and gave him 120 days to recant in Rome, and on January 3, 1951 Pope Leo excommunicated Martin Luther from the Catholic Church. Luther hid in the town of Eisenach for the next year, where he began his work on one of his most important life projects: the translation of the New Testament into German which took him 10 years to complete.

Luther is remembered as a controversial figure, not only for his writings which led to significant religious reform and division, but also for his stance on radical positions such as his pronouncements against the Jews. Some of Luther’s most significant contributions to theological history include his insistence that the Bible is the sole religious authority and that he helped make it available to everyone by translating it into various languages. Both of these were truly revolutionary events. Luther tried to democratize Christianity by putting an emphasis on the individual believer rather than on the church and its priests. He encouraged people to read the Bible themselves instead of just blindly follow the teachings of Catholic priests and the distant Pope. One of Luther’s most revolutionary ideas was that he claimed that the people represented a “priesthood of all believers.”

Luther was a true spiritual revolutionary who undermined the authority of the Catholic Church by showing that many of its officials were corrupt. He called the Pope “the greatest thief and robber that has appeared or can appear on earth” and denounced the Catholic Church as “the kingdom of sin, death, and hell”. The ideas that Luther promoted were unheard of at this time and that is what truly made him a revolutionary figure. These revolutionary ideas eventually got Luther expelled from the Catholic Church by Pope Leo X in 1521 and sentenced to death. Shortly after his expulsion and sentencing to death, a civil war broke out among the German principalities. During this civil war a powerful German prince protected Luther from the Church’s wrath.

Luther’s impact on the church and world is very profound and can still be seen today. His writing of the hymn “A Mighty Fortress is Our God” is a remarkable hymn that is indicative of Luther’s works and teachings. He also published his Larger and Smaller Catechism, which have guided not just Lutherans but many denominations for centuries. Luther’s legacy is so immense that it cannot be adequately summarized. Every Protestant reformer and every Protestant stream were inspired by Lutheran in one way or another. His reform contributed to the end of the Middle Ages and brought in the modern era.

Shortly after his “95 Theses”, he put out three important treatises: The Address to the Christian Nobility, The Babylonian Captivity of the Church, and On the Freedom of a Christian. In the first, he argues that all Christians were priests, and he encouraged rulers to be a part of the church reform. In the second, he reduced the seven sacraments to two (baptism and the Lord’s Supper). Lastly, in the third, he told Christians they were free from the law, especially church laws, but bound in love to their neighbors. Each of these treatises that he put out were significant and are still considered applicable to present day Christians.

In Luther’s later years he was often sick but that never stopped him from working hard and putting more of his work out to the world. Although he was sick for six months and suffered from exhaustion in 1531 he preached 180 sermons, wrote 15 tracts, worked on his Old Testament translation, and took a number of trips. But, eventually this all caught up to him and in 1542, he died of a sudden stroke during a trip to his hometown of Eisleben.

In conclusion, Luther was both a religious and political revolutionary figure in his time, who made countless contributions to the Christian faith. His impact cannot be discounted because he did so much to revolutionize and change people’s minds about Christianity. His contributions to the Bible are also very significant, because he made it possible for many people who previously could not read the Bible to have access to it. His ideas continue to impact Christians and non-Christians today.

Essay about Doors of Wittenburg