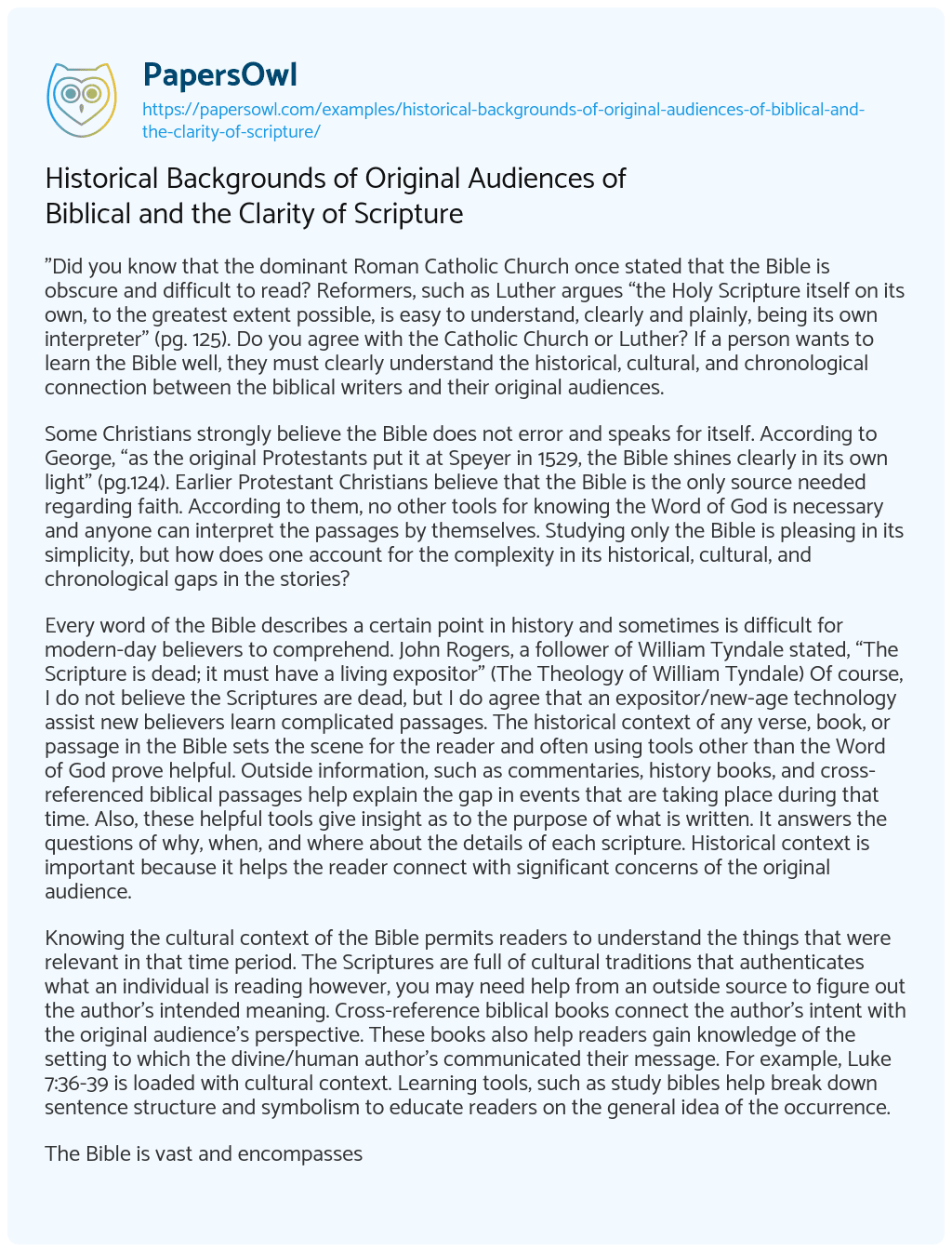 “Did you know that the dominant Roman Catholic Church once stated that the Bible is obscure and difficult to read? Reformers, such as Luther argues “the Holy Scripture itself on its own, to the greatest extent possible, is easy to understand, clearly and plainly, being its own interpreter” (pg. 125). Do you agree with the Catholic Church or Luther? If a person wants to learn the Bible well, they must clearly understand the historical, cultural, and chronological connection between the biblical writers and their original audiences.

Some Christians strongly believe the Bible does not error and speaks for itself. According to George, “as the original Protestants put it at Speyer in 1529, the Bible shines clearly in its own light” (pg.124). Earlier Protestant Christians believe that the Bible is the only source needed regarding faith. According to them, no other tools for knowing the Word of God is necessary and anyone can interpret the passages by themselves. Studying only the Bible is pleasing in its simplicity, but how does one account for the complexity in its historical, cultural, and chronological gaps in the stories?

Every word of the Bible describes a certain point in history and sometimes is difficult for modern-day believers to comprehend. John Rogers, a follower of William Tyndale stated, “The Scripture is dead; it must have a living expositor” (The Theology of William Tyndale) Of course, I do not believe the Scriptures are dead, but I do agree that an expositor/new-age technology assist new believers learn complicated passages. The historical context of any verse, book, or passage in the Bible sets the scene for the reader and often using tools other than the Word of God prove helpful. Outside information, such as commentaries, history books, and cross-referenced biblical passages help explain the gap in events that are taking place during that time. Also, these helpful tools give insight as to the purpose of what is written. It answers the questions of why, when, and where about the details of each scripture. Historical context is important because it helps the reader connect with significant concerns of the original audience.

Knowing the cultural context of the Bible permits readers to understand the things that were relevant in that time period. The Scriptures are full of cultural traditions that authenticates what an individual is reading however, you may need help from an outside source to figure out the author’s intended meaning. Cross-reference biblical books connect the author’s intent with the original audience’s perspective. These books also help readers gain knowledge of the setting to which the divine/human author’s communicated their message. For example, Luke 7:36-39 is loaded with cultural context. Learning tools, such as study bibles help break down sentence structure and symbolism to educate readers on the general idea of the occurrence.

The Bible is vast and encompasses everything from Creation to the end of the world. The strength of the Christian faith is crucially connected to a biblical timeline. Chronological context is important when reading the Bible because it specifies the exact order an event takes place. Without it, it is impossible to understand biblical history. Not only do readers find chronological context in the historical books of the Bible, but also in the prophetic books, in the New Testament Gospels, and in the works of the Apostle Paul. Sometimes study tools such as the Chronological Study Bibles or maps are vital for discovering facts that are left out of some passages.”

Historical Backgrounds of Original Audiences of Biblical and the Clarity of Scripture. (2021, Jul 03). Retrieved from https://papersowl.com/examples/historical-backgrounds-of-original-audiences-of-biblical-and-the-clarity-of-scripture/

Historical Value of the Bible

Studying and Examining Reformation and Christianity

A Biblical Approach to Sex Education