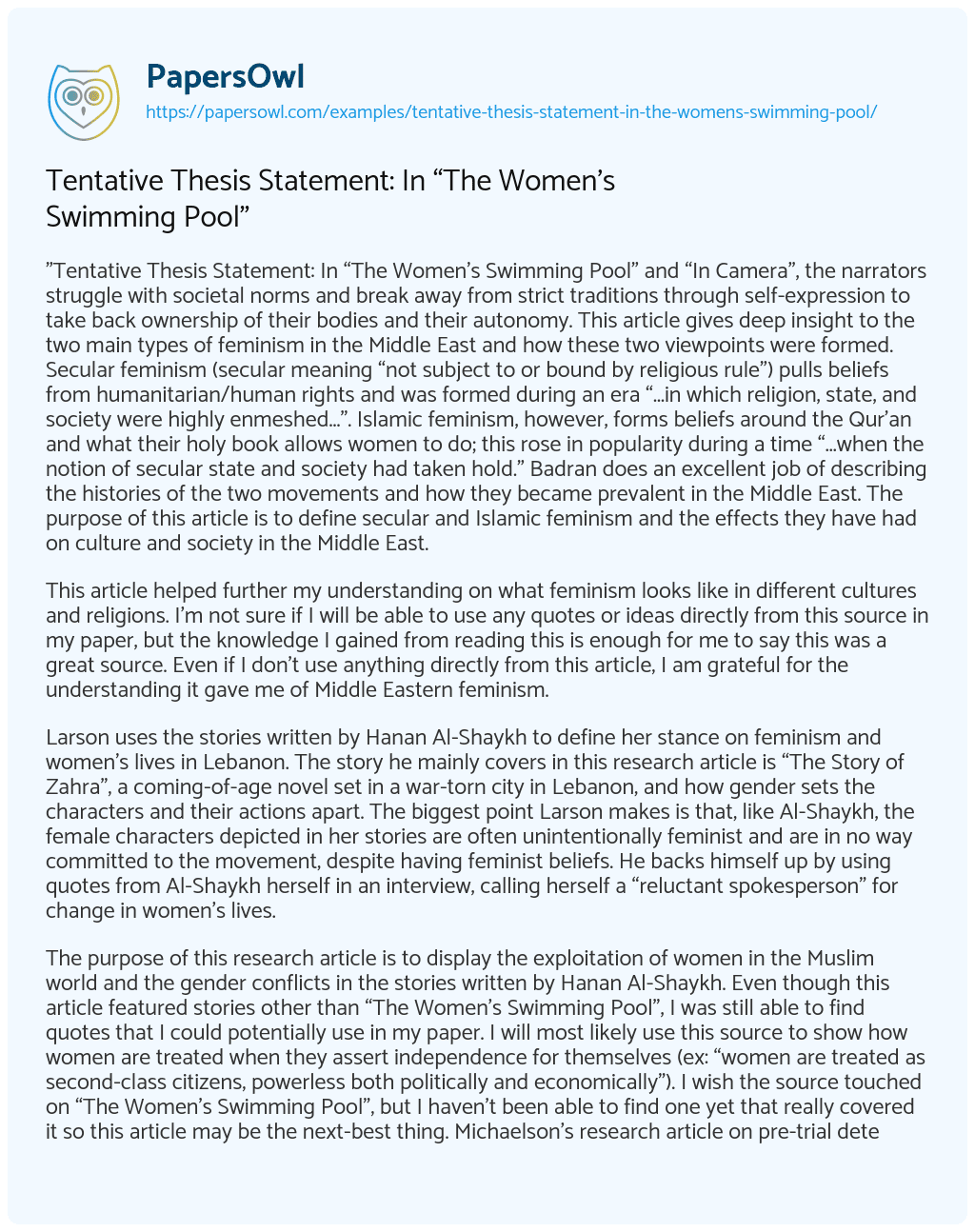 “Tentative Thesis Statement: In “The Women’s Swimming Pool” and “In Camera”, the narrators struggle with societal norms and break away from strict traditions through self-expression to take back ownership of their bodies and their autonomy. This article gives deep insight to the two main types of feminism in the Middle East and how these two viewpoints were formed. Secular feminism (secular meaning “not subject to or bound by religious rule”) pulls beliefs from humanitarian/human rights and was formed during an era “…in which religion, state, and society were highly enmeshed…”. Islamic feminism, however, forms beliefs around the Qur’an and what their holy book allows women to do; this rose in popularity during a time “…when the notion of secular state and society had taken hold.” Badran does an excellent job of describing the histories of the two movements and how they became prevalent in the Middle East. The purpose of this article is to define secular and Islamic feminism and the effects they have had on culture and society in the Middle East.

This article helped further my understanding on what feminism looks like in different cultures and religions. I’m not sure if I will be able to use any quotes or ideas directly from this source in my paper, but the knowledge I gained from reading this is enough for me to say this was a great source. Even if I don’t use anything directly from this article, I am grateful for the understanding it gave me of Middle Eastern feminism.

Larson uses the stories written by Hanan Al-Shaykh to define her stance on feminism and women’s lives in Lebanon. The story he mainly covers in this research article is “The Story of Zahra”, a coming-of-age novel set in a war-torn city in Lebanon, and how gender sets the characters and their actions apart. The biggest point Larson makes is that, like Al-Shaykh, the female characters depicted in her stories are often unintentionally feminist and are in no way committed to the movement, despite having feminist beliefs. He backs himself up by using quotes from Al-Shaykh herself in an interview, calling herself a “reluctant spokesperson” for change in women’s lives.

The purpose of this research article is to display the exploitation of women in the Muslim world and the gender conflicts in the stories written by Hanan Al-Shaykh. Even though this article featured stories other than “The Women’s Swimming Pool”, I was still able to find quotes that I could potentially use in my paper. I will most likely use this source to show how women are treated when they assert independence for themselves (ex: “women are treated as second-class citizens, powerless both politically and economically”). I wish the source touched on “The Women’s Swimming Pool”, but I haven’t been able to find one yet that really covered it so this article may be the next-best thing. Michaelson’s research article on pre-trial detention makes the reader more aware of the unjust treatment being forced upon innocent civilians in Egypt in recent years. She introduces the inhumane acts by referencing a specific case where a young woman who had recently been seen at a protest became a victim of forced disappearance; the Egyptian law enforcement captured her, along with 12 other women, and charged them with crimes such as “protesting with the aim of overthrowing the regime”, “belonging to a banned group”, and assault of a police officer while the protest was being dispersed (these girls are now known as “The Damietta Girls”). Michaelson is able to display sources from citizens still in prison for crimes they haven’t been tried for, which only strengthens her argument that such acts are cruel and illegal.

This article delves into the life and beliefs of Nawal El-Saadawi and how her feminist beliefs affected her life and career. Suwaed describes the culture in Egypt before and around the time El-Saadawi was born to show how much her views differed from those around her and how she fought against the inequality of her time. Quotes from interviews El-Saadawi participated in are used throughout the article to strengthen the idea that her feminist beliefs changed how she viewed herself and the life around her.

The purpose of this article is to highlight the beliefs of Nawal El-Saadawi and to explain how Egyptian culture at the time influenced her to become a strong advocate for feminism and gender equality. I found this article to be very well-written and useful for my thesis. El-Saadawi’s own experiences with inequality in her daily life as a child will likely aide in my discussion of strict traditions in the Middle East.

This article takes data from Israel, Egypt, Palestine, and Kuwait and investigates the attitudes around both genders and how they relate to international relations. A brief summary of typical “feminine” and “masculine” political attitudes are given (men being more aggressive and competitive and women being more compromising and tolerant) and then the article delves into the data given by each country listed earlier and how they compare to one another.

The purpose of this article is to compare the attitudes surrounding gender and international relations among different countries in the Middle East. The data about Egypt specifically was very useful for me. I’m not sure if I will be able to use it directly in my paper, but it was good to learn that despite the fact that women fought alongside men for independence, it took much longer for them to see the same freedoms that were being granted to men. This knowledge should help when writing my essay and comparing the restrictions placed on men vs women in the Middle East as a whole.”