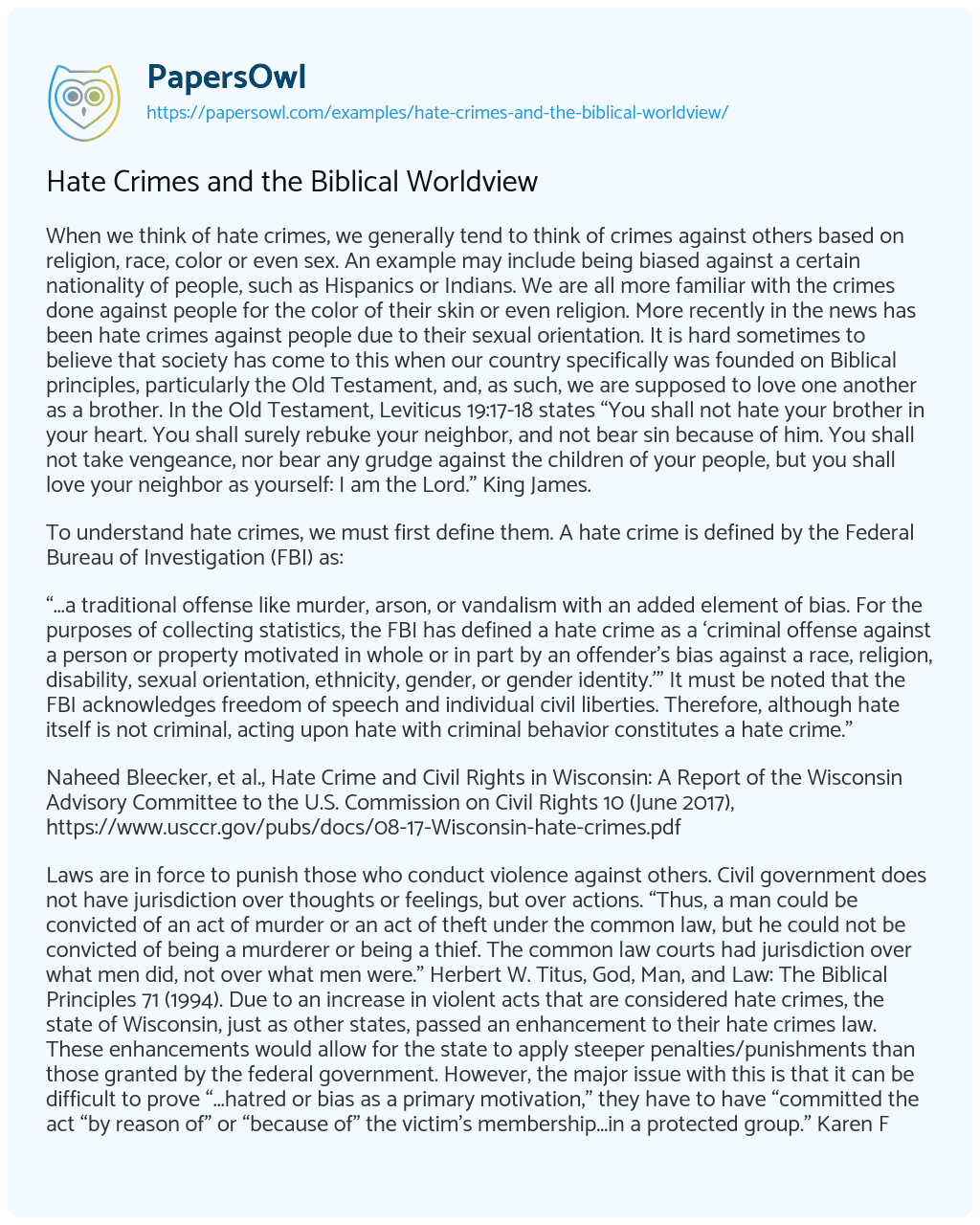 When we think of hate crimes, we generally tend to think of crimes against others based on religion, race, color or even sex. An example may include being biased against a certain nationality of people, such as Hispanics or Indians. We are all more familiar with the crimes done against people for the color of their skin or even religion. More recently in the news has been hate crimes against people due to their sexual orientation. It is hard sometimes to believe that society has come to this when our country specifically was founded on Biblical principles, particularly the Old Testament, and, as such, we are supposed to love one another as a brother. In the Old Testament, Leviticus 19:17-18 states “You shall not hate your brother in your heart. You shall surely rebuke your neighbor, and not bear sin because of him. You shall not take vengeance, nor bear any grudge against the children of your people, but you shall love your neighbor as yourself: I am the Lord.” King James.

To understand hate crimes, we must first define them. A hate crime is defined by the Federal Bureau of Investigation (FBI) as:

“…a traditional offense like murder, arson, or vandalism with an added element of bias. For the purposes of collecting statistics, the FBI has defined a hate crime as a ‘criminal offense against a person or property motivated in whole or in part by an offender’s bias against a race, religion, disability, sexual orientation, ethnicity, gender, or gender identity.’” It must be noted that the FBI acknowledges freedom of speech and individual civil liberties. Therefore, although hate itself is not criminal, acting upon hate with criminal behavior constitutes a hate crime.”

Laws are in force to punish those who conduct violence against others. Civil government does not have jurisdiction over thoughts or feelings, but over actions. “Thus, a man could be convicted of an act of murder or an act of theft under the common law, but he could not be convicted of being a murderer or being a thief. The common law courts had jurisdiction over what men did, not over what men were.” Herbert W. Titus, God, Man, and Law: The Biblical Principles 71 (1994). Due to an increase in violent acts that are considered hate crimes, the state of Wisconsin, just as other states, passed an enhancement to their hate crimes law. These enhancements would allow for the state to apply steeper penalties/punishments than those granted by the federal government. However, the major issue with this is that it can be difficult to prove “…hatred or bias as a primary motivation,” they have to have “committed the act “by reason of” or “because of” the victim’s membership…in a protected group.” Karen Franklin, Good Intentions: The Enforcement of Hate Crime Penalty-Enhancement Statutes, American Behavioral Scientist, Vol. 46, No. 1, 157 (Sept. 2002), https://journals-sagepub-com.ezproxy.liberty.edu/doi/pdf/10.1177/ 0002764202046001010. What criminal is going to come forward and admit that he did indeed pick someone because of the protected classes for his target? There will be some that do, specifically those who belong to some sort of “anti” group, like the neo-Natzis, as they, for some reason take pride in the harm that they cause. But, generally, it would take time and a lot of investigation to determine whether or not the individual selected the victim because of a protected class.

As a Christian, we must look at these enhancements and the Hate Crime laws and decide if they meet what we are supposed to adhere to. God is the sovereign authority who created all laws in the beginning and everything we have. We can read about sin in the Bible, however, we must decide if the sin is punishable through the Bible or through the civil government.

“Strictly speaking, all Biblical crimes are Biblical sins, but not all Biblical sins are Biblical crimes. For example…anger is a sin which can be disciplined by the church, but not punished by the state. However, if one acts out his anger in an act of violence or slander, then the state is authorized to punish this crime of the “”wrongdoer’ (Ro. 13:4). Crime is publicly punishable sin, for which God has provided the just punishment.”

The Book of Ezra also mentions that we should adhere to not only God’s law but the law of the land: “Whoever will not observe the law of your God and the law of the king, let judgment be executed speedily on him, whether it be death, or banishment, or confiscation of goods, or imprisonment.” Ezra 7:26 (King James). In reading this verse and others throughout the Bible as well as the information provided in this essay, as long as it is determined beyond a shadow of doubt that that the criminal has committed a Hate Crime towards a particular person, then the action could be punishable by the courts. In this, I believe the biblical worldview exists: the government cannot punish someone for mere hatred or thought, but they can punish for the crimes that people commit towards one another. God will deal with the rest when their day comes.

Hate Crimes and the Biblical Worldview. (2021, Mar 16). Retrieved from https://papersowl.com/examples/hate-crimes-and-the-biblical-worldview/

Hate Crimes: their Nature and the Laws Connected with them