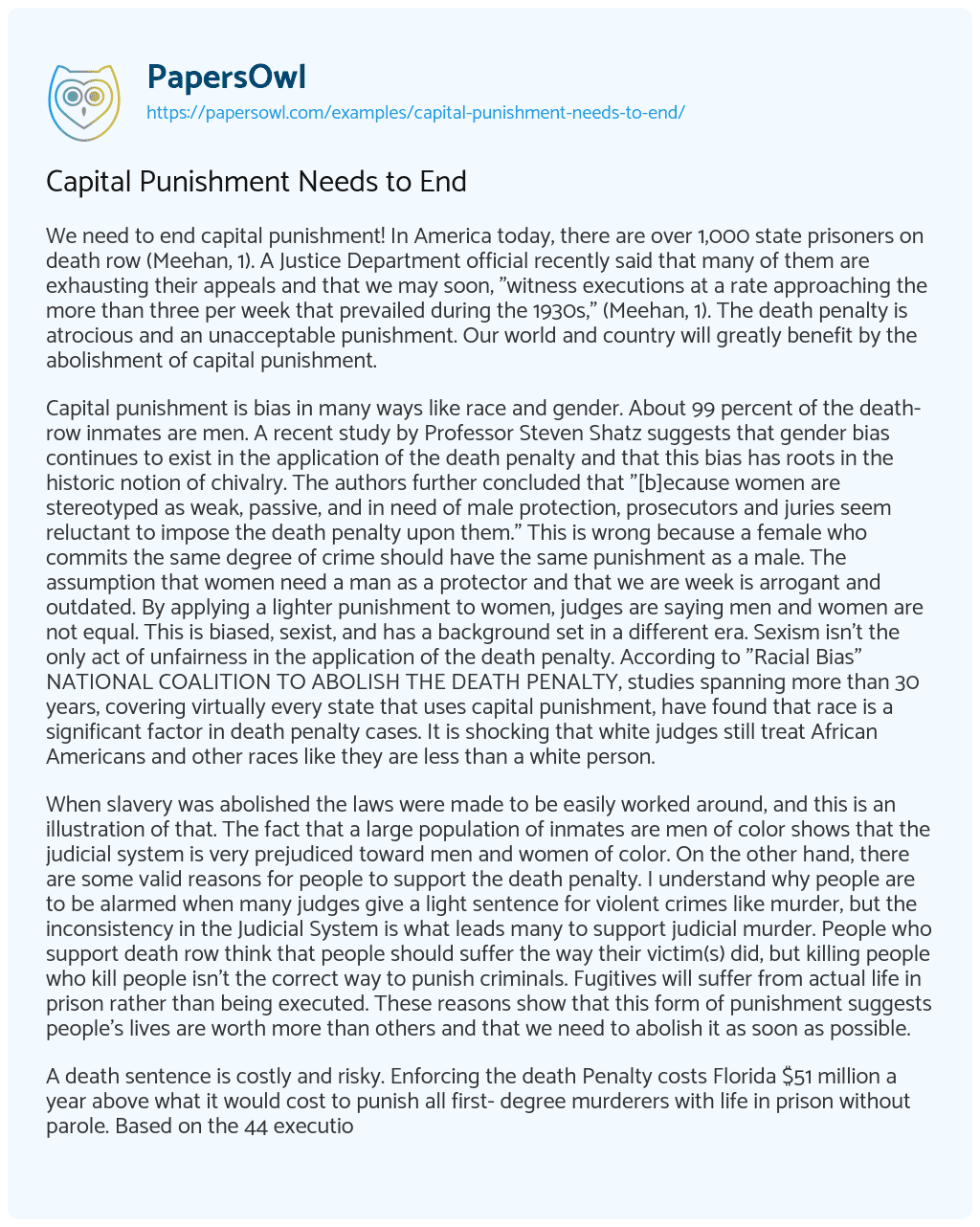 We need to end capital punishment! In America today, there are over 1,000 state prisoners on death row (Meehan, 1). A Justice Department official recently said that many of them are exhausting their appeals and that we may soon, “witness executions at a rate approaching the more than three per week that prevailed during the 1930s,” (Meehan, 1). The death penalty is atrocious and an unacceptable punishment. Our world and country will greatly benefit by the abolishment of capital punishment.

Capital punishment is bias in many ways like race and gender. About 99 percent of the death-row inmates are men. A recent study by Professor Steven Shatz suggests that gender bias continues to exist in the application of the death penalty and that this bias has roots in the historic notion of chivalry. The authors further concluded that “[b]ecause women are stereotyped as weak, passive, and in need of male protection, prosecutors and juries seem reluctant to impose the death penalty upon them.” This is wrong because a female who commits the same degree of crime should have the same punishment as a male. The assumption that women need a man as a protector and that we are week is arrogant and outdated. By applying a lighter punishment to women, judges are saying men and women are not equal. This is biased, sexist, and has a background set in a different era. Sexism isn’t the only act of unfairness in the application of the death penalty. According to “Racial Bias” NATIONAL COALITION TO ABOLISH THE DEATH PENALTY, studies spanning more than 30 years, covering virtually every state that uses capital punishment, have found that race is a significant factor in death penalty cases. It is shocking that white judges still treat African Americans and other races like they are less than a white person.

When slavery was abolished the laws were made to be easily worked around, and this is an illustration of that. The fact that a large population of inmates are men of color shows that the judicial system is very prejudiced toward men and women of color. On the other hand, there are some valid reasons for people to support the death penalty. I understand why people are to be alarmed when many judges give a light sentence for violent crimes like murder, but the inconsistency in the Judicial System is what leads many to support judicial murder. People who support death row think that people should suffer the way their victim(s) did, but killing people who kill people isn’t the correct way to punish criminals. Fugitives will suffer from actual life in prison rather than being executed. These reasons show that this form of punishment suggests people’s lives are worth more than others and that we need to abolish it as soon as possible.

A death sentence is costly and risky. Enforcing the death Penalty costs Florida $51 million a year above what it would cost to punish all first- degree murderers with life in prison without parole. Based on the 44 executions in Florida had carried out since 1976, that amounts to a cost of $24 million for each execution (Palms Beach Post, January 4, 2000). States could be using this money to better the planet, schools, and medical research. The money is being used in a sick way by using for a disgusting cause. Ending someone’s life does not remove the expenses they’ve cost their state and country. The cost isn’t the only thing that’s risky about the death penalty. Watt Espy, an Alabamian, who has done intensive research on American executions, says that he has “every reason to believe” that 10 innocent men were executed in Alabama alone. Mr. Espy cites names, dates, and other specifics of the cases. He adds that there are similar cases in virtually every state. There have been multiple cases where criminals were proven innocent before the execution date, but what would happen if they went through with it? There is no way to reverse an innocent execution. The men and women released from death rows lives will never be the same after a traumatizing experience like a prison. Killing innocent people is one of the lowest things our world can do. On the other hand, some people on the pro side of the argument think the death penalty is needed to maintain peace and protection in our country. The authors of the article “STUDIES: Death Penalty Had No Effect on Reducing Crime,” noted criminals do not consider the consequences of their actions, particularly when the consequence is rarely applied, as in the case of the death penalty. The fact shows that ending a criminals life doesn’t make crime rates lower. This form of discipline is used negatively for a useless, ineffective outcome, and the death penalty continues to have a higher cost than a positive outcome.

The death penalty being abolished will be of great value worldwide. With the end of death row, the benefits would lead us to live a much happier life. Examples such as race, sex, cost, and risk are all taken into consideration if the government is doing the correct thing. Obviously, there are still many more reasons and facts to support and disagree with capital punishment to explore. But, if you took all the facts, studies, and opinions into consideration what would your take on death row be?