Battle from the Beginning of Time – Discrimination 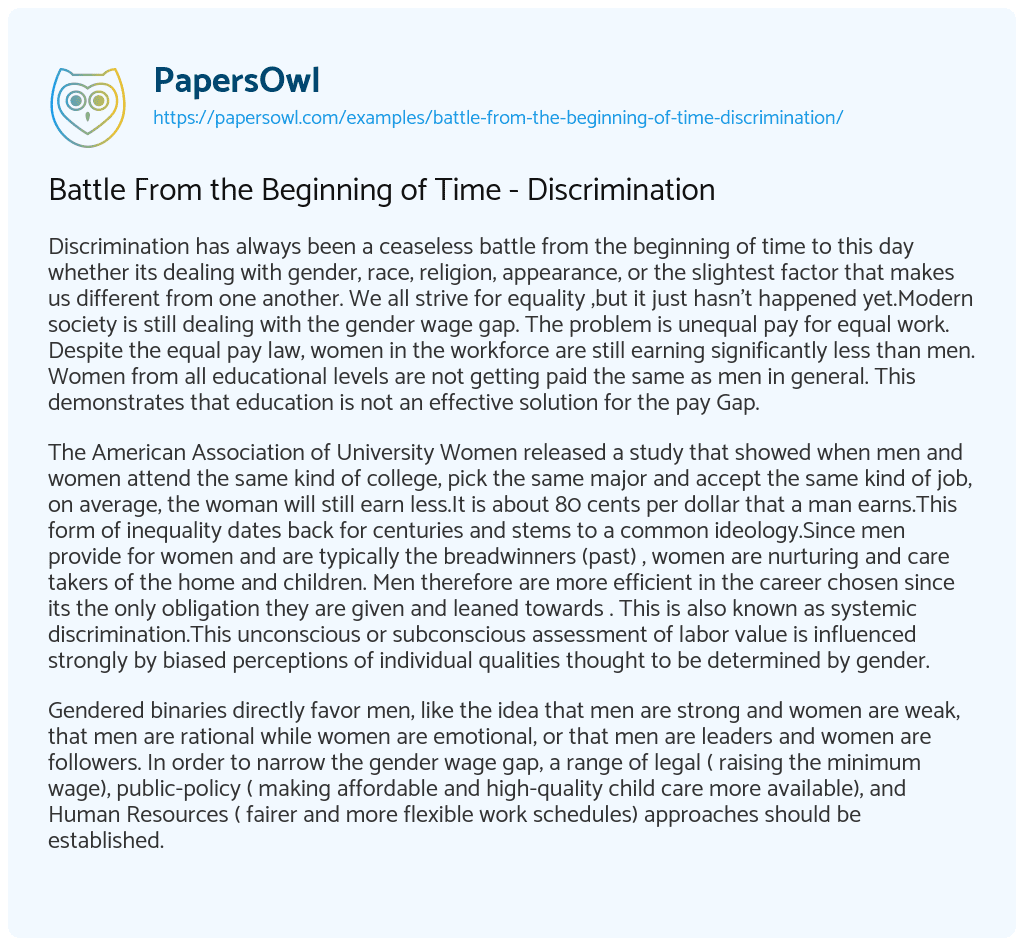 Discrimination has always been a ceaseless battle from the beginning of time to this day whether its dealing with gender, race, religion, appearance, or the slightest factor that makes us different from one another. We all strive for equality ,but it just hasn’t happened yet.Modern society is still dealing with the gender wage gap. The problem is unequal pay for equal work. Despite the equal pay law, women in the workforce are still earning significantly less than men. Women from all educational levels are not getting paid the same as men in general. This demonstrates that education is not an effective solution for the pay Gap.

The American Association of University Women released a study that showed when men and women attend the same kind of college, pick the same major and accept the same kind of job, on average, the woman will still earn less.It is about 80 cents per dollar that a man earns.This form of inequality dates back for centuries and stems to a common ideology.Since men provide for women and are typically the breadwinners (past) , women are nurturing and care takers of the home and children. Men therefore are more efficient in the career chosen since its the only obligation they are given and leaned towards . This is also known as systemic discrimination.This unconscious or subconscious assessment of labor value is influenced strongly by biased perceptions of individual qualities thought to be determined by gender.

Gendered binaries directly favor men, like the idea that men are strong and women are weak, that men are rational while women are emotional, or that men are leaders and women are followers. In order to narrow the gender wage gap, a range of legal ( raising the minimum wage), public-policy ( making affordable and high-quality child care more available), and Human Resources ( fairer and more flexible work schedules) approaches should be established.

Battle From the Beginning of Time - Discrimination. (2021, Jul 03). Retrieved from https://papersowl.com/examples/battle-from-the-beginning-of-time-discrimination/