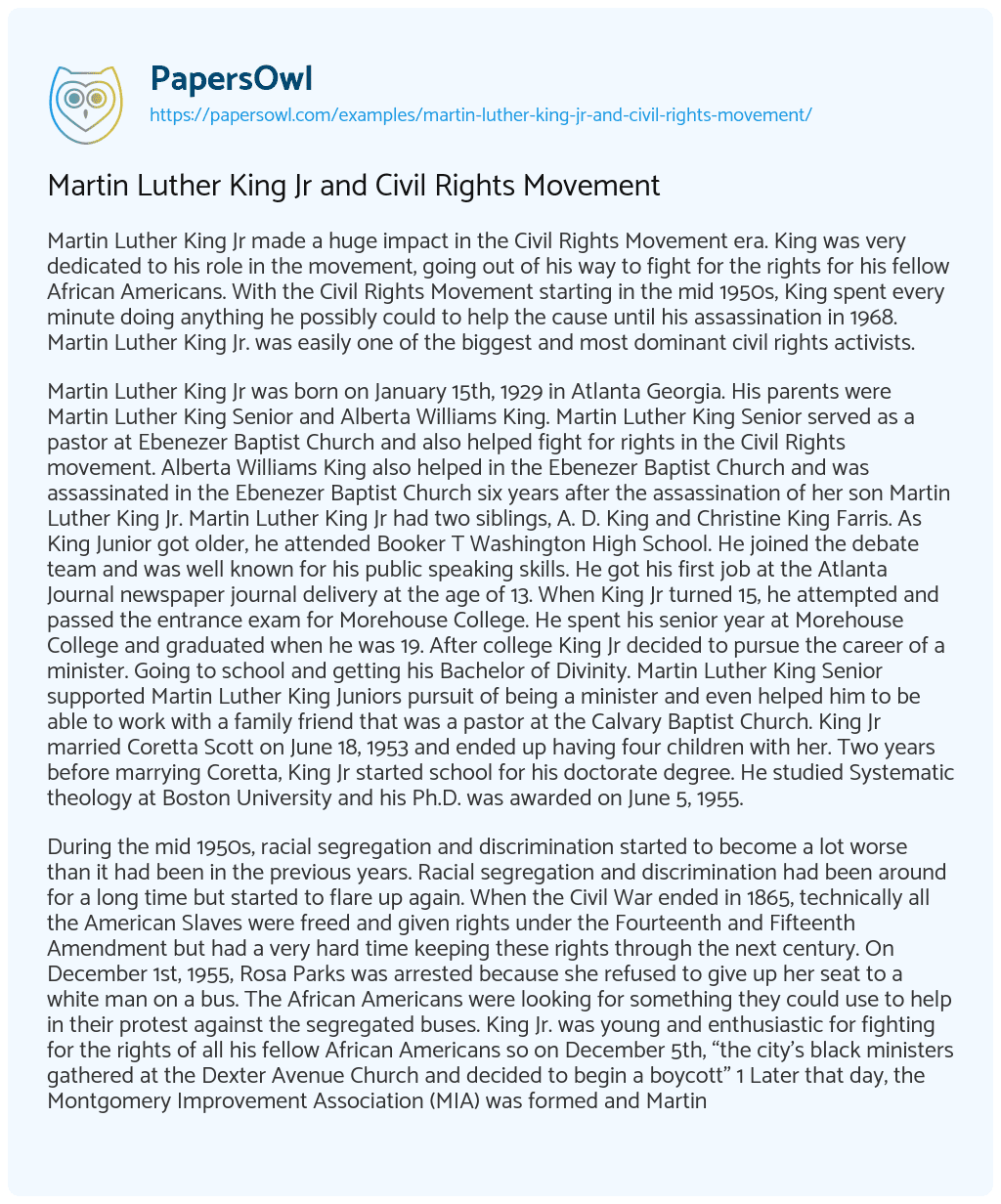 Martin Luther King Jr made a huge impact in the Civil Rights Movement era. King was very dedicated to his role in the movement, going out of his way to fight for the rights for his fellow African Americans. With the Civil Rights Movement starting in the mid 1950s, King spent every minute doing anything he possibly could to help the cause until his assassination in 1968. Martin Luther King Jr. was easily one of the biggest and most dominant civil rights activists.

During the mid 1950s, racial segregation and discrimination started to become a lot worse than it had been in the previous years. Racial segregation and discrimination had been around for a long time but started to flare up again. When the Civil War ended in 1865, technically all the American Slaves were freed and given rights under the Fourteenth and Fifteenth Amendment but had a very hard time keeping these rights through the next century. On December 1st, 1955, Rosa Parks was arrested because she refused to give up her seat to a white man on a bus. The African Americans were looking for something they could use to help in their protest against the segregated buses. King Jr. was young and enthusiastic for fighting for the rights of all his fellow African Americans so on December 5th, “the city’s black ministers gathered at the Dexter Avenue Church and decided to begin a boycott” 1 Later that day, the Montgomery Improvement Association (MIA) was formed and Martin Luther King Jr. was appointed president. King Jr. was all about keeping it non-violent, King believed “that violence promoted hate, and hate more violence”. 2 Even though Martin Luther King was a peaceful, non-violent man but his opposers were quite different. On September 30th, 1956, Martin Luther King Jr’s house was bombed by segregationists in retaliation for the success of the Montgomery Bus Boycott. King Jr held his beliefs and kept going strong with the Bus Boycott until in November 1956, the U.S. Supreme Court “declared Montgomery’s segregationist bus laws unconstitutional.”

As King Jr started getting bigger off the Montgomery Bus Boycott victory, he organized the Southern Christian Leadership Conference (SCLC). The Southern Christian Leadership Conference “enabled civil rights activists and religious leaders to coordinate their efforts and provided King with greater visibility and support”. 4 Two years after the Southern Christian Leadership Conference was founded, King met with the Indian Prime Minister Jawaharlal Nehru and other fellow believers of Gandhi’s philosophy of satyagraha (form of nonviolent resistance or civil resistance). King held this meeting to help himself insure that his beliefs of receiving freedom from “racial oppression must be achieved through nonviolent resistance”. 5 At the beginning of the 1960’s, King moved to Atlanta, keeping on with intense fight for equal rights. King was constantly receiving “threats directed at himself and his family” 6 While King was protesting and doing all his activities, he would quite often get arrested. While he is serving some time in a Birmingham jail, he wrote his popular essay, “Letter from a Birmingham Jail.” King makes some very rememberable remarks in this essay such as: “Just as Socrates felt that it was necessary to create a tension in the mind so that individuals could rise from the bondage of myths and half-truths to the unfettered realm of creative analysis and objective appraisal, so must we see the need for nonviolent gadflies to create the kind of tension in society that will help men rise from the dark depths of prejudice and racism to majestic heights of understanding and brotherhood.” 7 and “So I have tried to make it clear that it is wrong to use immoral means to attain moral ends. But now I must affirm that it is just as wrong, or even more so, to use moral means to preserve immoral ends.” 8 “Letter from Birmingham Jail” could easily go down as the most powerful essay in the civil rights era. The essay served as a physical reproducible account of the long road to freedom in a movement that was mostly focused around actions and spoken words. It is thought to be a personal correspondence, addressed to the eight white ministers. The letter opens addressing the ministers with “My dear fellow clergymen” 9 and concludes with “Yours for the cause of peace and brotherhood.” 10 However the letter was never sent to the eight men but instead was used by the movement for public relations purposes as a response to broader criticisms from around the country.

Unfortunately, on the day of April 4th, 1968, Martin Luther King Jr. was shot and eventually died later at the hospital. The day before, King speaking to some of his followers, stated he “feared no man” and “Mine eyes have seen the glory of the coming of the Lord.” not knowing that the next day was his last. The shooters name was James Earl Ray, who escaped prison a year before the shooting. King was on the balcony of his hotel when he was shot by Ray from a nearby building. There were tons of chaos after the assassination, “Violence erupted in more than 100 cities across the nation, eventually requiring 50,000 troops to restore order. In Washington, D.C., alone, many downtown buildings were torched, and there were 11 deaths, more than 1,200 injuries, and more than 7,600 arrests.” 11 Ray was later found hiding in London, England. Ray plead guilty and was sentenced 99 years in prison. Martin Luther King Jr’s assassination, similar to President John F Kennedy, “spawned an extraordinary number of conspiracy theories.” 12 The biggest conspiracy theory that came out of the situation was that President Johnson and the federal government were behind the killing. Even King’s family believed that the government was behind the death. King’s son met with Ray in 1997 and asked if he shot his father and Ray denied it.

Dexter King stated that instead of Ray being behind the shooting that “instead that a vast government conspiracy, which included a Special Forces team and the Mafia, had been responsible for his father’s assassination.” 13 Since the assassination of Martin Luther King Jr, he has done nothing but get bigger. Over 650,000 tourists visit every year, from all over the world, the Martin Luther King Jr. National Historic Site in Atlanta, Georgia, which includes the King Center and Archives, burial site and his birthplace. Even though both African Americans and whites grieved for King’s passing, the assassination in a couple ways served to extend the split between African Americans and White Americans, as many African Americans saw King’s assassination as a rejection of their spirited pursuit of equality through the nonviolent resistance he had advocated. His assassination, like the assassination of Malcolm X in 1965, radicalized many average African-American activists, aiding to the thickening of the Black Panther Party and the Black Power movement in the late 1960s and early 1970s. King became and still remains the most widely known African-American leader of his time, and the most public face and persuasive voice of the civil rights movement.

Even after Martin Luther King Jr. died, he was still making differences in the world. A campaign to create a national holiday in Martin Luther King Jr’s honor began almost immediately after his death, and its advocates overcame significant opposition. Many people that did not like King brought up the FBI surveillance files suggesting King’s unfaithfulness and his influence by Communists, but it did not stop President Ronald Reagan from signing the King holiday bill into law in 1983. The legacy of Martin Luther King Jr. encloses important compromises, huge actions and constant advancement of humanitarian rights that reach way beyond the civil rights movement. King maintained a view of a more distinct America where the whole nation could enjoy the benefits of equality. Martin Luther King understood the impact of bringing together groups of people in the fight for the same goal. King’s leadership contributed to the long-term success of the civil rights movement in the 1950’s and through the 1960’s and still continues to impact civil rights movements in the present. Martin Luther King Day is now designated a national day of service. Citizens of the United States are encouraged to celebrate a day by not taking it off but putting in the effort to make the nation a better place in honor of King’s commitment to improving the lives of others.