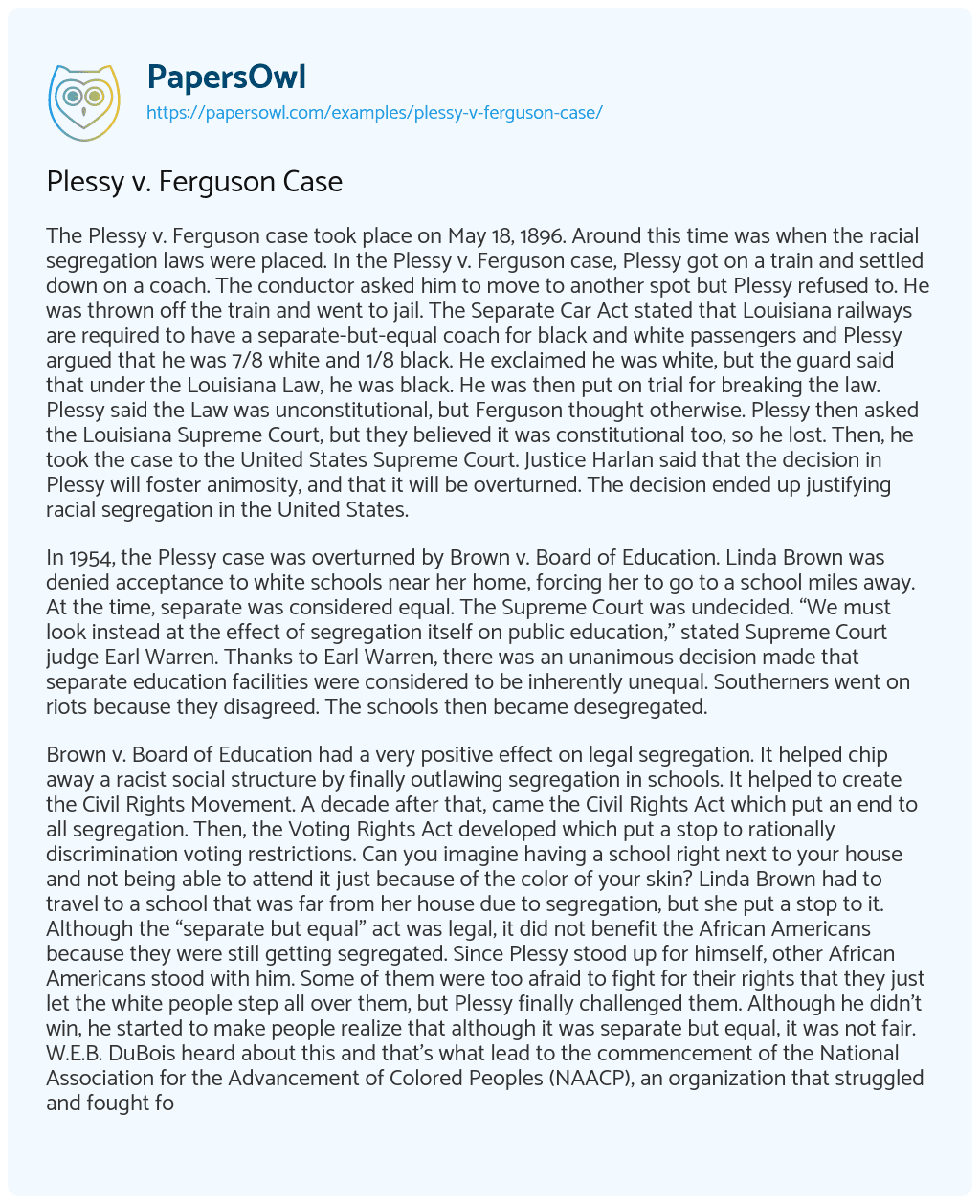 The Plessy v. Ferguson case took place on May 18, 1896. Around this time was when the racial segregation laws were placed. In the Plessy v. Ferguson case, Plessy got on a train and settled down on a coach. The conductor asked him to move to another spot but Plessy refused to. He was thrown off the train and went to jail. The Separate Car Act stated that Louisiana railways are required to have a separate-but-equal coach for black and white passengers and Plessy argued that he was 7/8 white and 1/8 black. He exclaimed he was white, but the guard said that under the Louisiana Law, he was black. He was then put on trial for breaking the law. Plessy said the Law was unconstitutional, but Ferguson thought otherwise. Plessy then asked the Louisiana Supreme Court, but they believed it was constitutional too, so he lost. Then, he took the case to the United States Supreme Court. Justice Harlan said that the decision in Plessy will foster animosity, and that it will be overturned. The decision ended up justifying racial segregation in the United States.

In 1954, the Plessy case was overturned by Brown v. Board of Education. Linda Brown was denied acceptance to white schools near her home, forcing her to go to a school miles away. At the time, separate was considered equal. The Supreme Court was undecided. “We must look instead at the effect of segregation itself on public education,” stated Supreme Court judge Earl Warren. Thanks to Earl Warren, there was an unanimous decision made that separate education facilities were considered to be inherently unequal. Southerners went on riots because they disagreed. The schools then became desegregated.

Brown v. Board of Education had a very positive effect on legal segregation. It helped chip away a racist social structure by finally outlawing segregation in schools. It helped to create the Civil Rights Movement. A decade after that, came the Civil Rights Act which put an end to all segregation. Then, the Voting Rights Act developed which put a stop to rationally discrimination voting restrictions. Can you imagine having a school right next to your house and not being able to attend it just because of the color of your skin? Linda Brown had to travel to a school that was far from her house due to segregation, but she put a stop to it. Although the “separate but equal” act was legal, it did not benefit the African Americans because they were still getting segregated. Since Plessy stood up for himself, other African Americans stood with him. Some of them were too afraid to fight for their rights that they just let the white people step all over them, but Plessy finally challenged them. Although he didn’t win, he started to make people realize that although it was separate but equal, it was not fair. W.E.B. DuBois heard about this and that’s what lead to the commencement of the National Association for the Advancement of Colored Peoples (NAACP), an organization that struggled and fought for the equal rights of colored people. In the Brown case, education was seen as one of the most important functions of government, so they overruled the separate but equal act, because it was unjust. Several cases where kids were being discriminated in schools is what helped bring this case to the Supreme Court. It was happening so often that it needed to be recognized.

The Brown and Plessy cases helped to establish the development of the NAACP Association. The NAACP helped accomplish a lot for African Americans no matter how brutally they were beat, killed, etc. They stood up for their rights while everyone else was afraid to do so because of the fear they had of being arrested or even killed. These cases helped to put an end to slavery and that everyone was treated equally. It took some time, but they made it happen.

The Supreme Court Case of Plessy V. Ferguson and the Racial Segregation Controversy