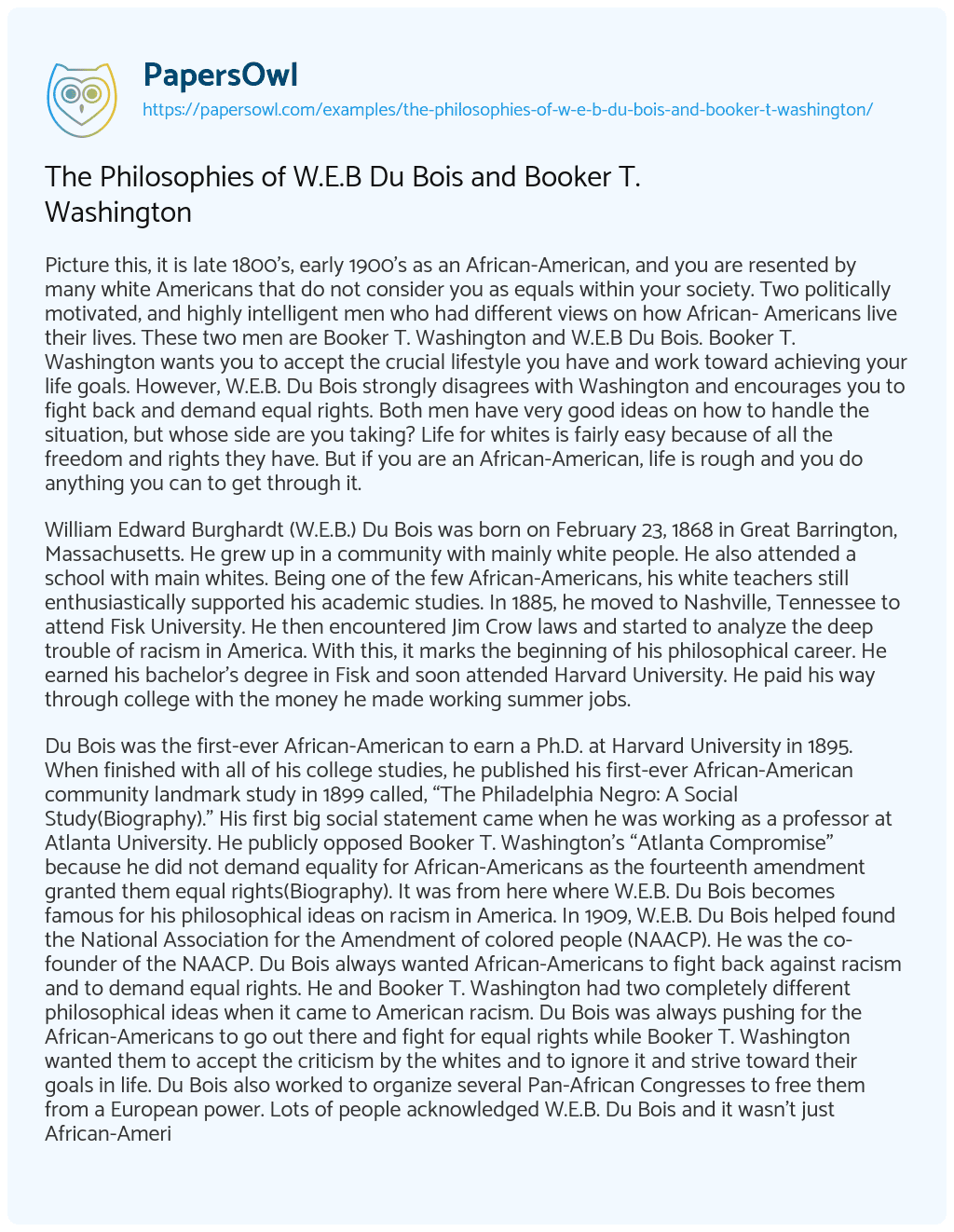 Picture this, it is late 1800’s, early 1900’s as an African-American, and you are resented by many white Americans that do not consider you as equals within your society. Two politically motivated, and highly intelligent men who had different views on how African- Americans live their lives. These two men are Booker T. Washington and W.E.B Du Bois. Booker T. Washington wants you to accept the crucial lifestyle you have and work toward achieving your life goals. However, W.E.B. Du Bois strongly disagrees with Washington and encourages you to fight back and demand equal rights. Both men have very good ideas on how to handle the situation, but whose side are you taking? Life for whites is fairly easy because of all the freedom and rights they have. But if you are an African-American, life is rough and you do anything you can to get through it.

William Edward Burghardt (W.E.B.) Du Bois was born on February 23, 1868 in Great Barrington, Massachusetts. He grew up in a community with mainly white people. He also attended a school with main whites. Being one of the few African-Americans, his white teachers still enthusiastically supported his academic studies. In 1885, he moved to Nashville, Tennessee to attend Fisk University. He then encountered Jim Crow laws and started to analyze the deep trouble of racism in America. With this, it marks the beginning of his philosophical career. He earned his bachelor’s degree in Fisk and soon attended Harvard University. He paid his way through college with the money he made working summer jobs.

Du Bois was the first-ever African-American to earn a Ph.D. at Harvard University in 1895. When finished with all of his college studies, he published his first-ever African-American community landmark study in 1899 called, “The Philadelphia Negro: A Social Study(Biography).” His first big social statement came when he was working as a professor at Atlanta University. He publicly opposed Booker T. Washington’s “Atlanta Compromise” because he did not demand equality for African-Americans as the fourteenth amendment granted them equal rights(Biography). It was from here where W.E.B. Du Bois becomes famous for his philosophical ideas on racism in America. In 1909, W.E.B. Du Bois helped found the National Association for the Amendment of colored people (NAACP). He was the co-founder of the NAACP. Du Bois always wanted African-Americans to fight back against racism and to demand equal rights. He and Booker T. Washington had two completely different philosophical ideas when it came to American racism. Du Bois was always pushing for the African-Americans to go out there and fight for equal rights while Booker T. Washington wanted them to accept the criticism by the whites and to ignore it and strive toward their goals in life. Du Bois also worked to organize several Pan-African Congresses to free them from a European power. Lots of people acknowledged W.E.B. Du Bois and it wasn’t just African-Americans, there were some whites who acknowledged what he did. Du Bois later passed away on August 27, 1963 just a day before Martin Luther King Jr’s famous “I Have A Dream” speech(Biography).

Booker T. Washington was born on April 5, 1856. He was born near Hale’s Ford Virginia and was born into slavery on a Virginia farm. His mother, Jane Ferguson, was a slave that cooked for their owner. His father was a white man who is still unknown til this day. He had an older and brother and his sister passed away at a very young age. When emancipated, his family settled in Malden, West Virginia. From 1865 to 1871 he worked in local coal and salt mines. In the fall of 1872, he attended Hampton Normal and Agricultural Institute. Samuel C. Armstrong played a huge role in Washington’s life. He was a major influence on Washington. After Washington’s graduation in 1875, he then went to teach at Malden, West Virginia. Washington eagerly started to grasp at starting his own school in Tuskegee, Alabama in 1881. He believed he needed to give blacks industrial education and moral training by which they could become economically self-sufficient and able to partake of the blessings of liberty and citizenship (Rawley). Washington became more well known in the summer of 1884 when he was invited to address the annual meeting of the National Education Association in Madison, Wisconsin. The address won for him recognition among educators and helped his fund-raising efforts (Rawley). In 1895, he delivered an address in the cotton states and this made him a national figure and spokesperson for the black people at the time (Rawley). With this, Washington became well known for his political views on racism. He was more laid back and wanted African-Americans to ignore the racism and strive toward life goals. He considered the conciliatory toward the South, “the agitation of the question of social equality the extremest folly” (Henretta, 534). Washington was the guy who accepted racism and wanted others to do the same.

Booker T. Washington and W.E.B. Du Bois were two completely different men when it came to politics. W.E.B. Du Bois did not agree with Washington’s political views of racism. Du Bois always fought for the equal rights of African-Americans. He thought that African-Americans should have the same rights as the whites did and urged people to go out there and fight for their rights. Booker T. however did not want them to fight. He urged his people to accept the racism and criticism by whites and strive toward their life goals. You notice that Washington was always wanting people to work hard in life because of his background. He was born in slave so he wanted others to work hard like him and accomplish their goals like he did. W.E.B Du Bois however, grew up in the Northern part of the U.S. He grew up in a place where African-Americans were treated fairly well so he didn’t get the idea of what it was like to work hard toward your goals in life. He got life the easy way for living in the north while Booker T. had to work hard in order to be successful in life because he lived in the South. Both men had two completely different life styles. Where Booker T. was born at, African-Americans were treated like and were slaves. They learned to respect the white people and they worked hard when they had to work. Like I said earlier about Du Bois, African-Americans got it a little easy up North. Whites treated blacks fairly decent up there and African-Americans did not have to work as hard up there because of how well they were treated.

These two men had completely different opinions on racism and will always be well known for what they did in the history of the United States. Back then, if you were an African-American, life was going to be rough no matter what. If you lived up North and you were an African-American, that didn’t mean you had the exact same equal rights as whites did. It just meant you would get treated a little better and you would have some rights, unlike down in the South. When it came to whose side you were taking, W.E.B. Du Bois or Booker T. Washington, it really just depended on how you grew up. Most African-Americans in the South would probably agree with Booker T. and take his side, but if you were in the North you probably went with W.E.B Du Bois. We will never know which man was more correct on how to live your lifestyle back then but we will always know what they believed was the right way to live.