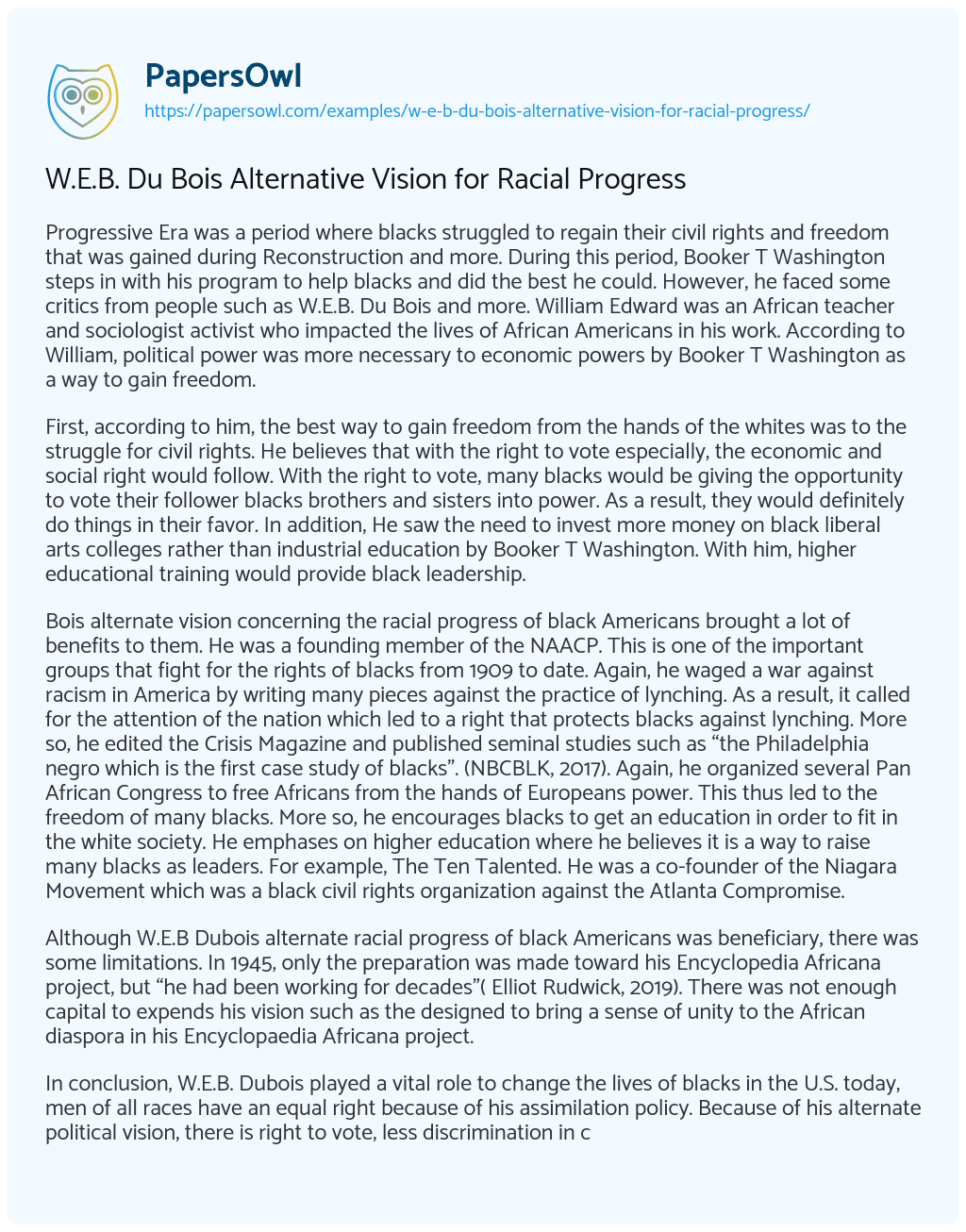 Progressive Era was a period where blacks struggled to regain their civil rights and freedom that was gained during Reconstruction and more. During this period, Booker T Washington steps in with his program to help blacks and did the best he could. However, he faced some critics from people such as W.E.B. Du Bois and more. William Edward was an African teacher and sociologist activist who impacted the lives of African Americans in his work. According to William, political power was more necessary to economic powers by Booker T Washington as a way to gain freedom.

First, according to him, the best way to gain freedom from the hands of the whites was to the struggle for civil rights. He believes that with the right to vote especially, the economic and social right would follow. With the right to vote, many blacks would be giving the opportunity to vote their follower blacks brothers and sisters into power. As a result, they would definitely do things in their favor. In addition, He saw the need to invest more money on black liberal arts colleges rather than industrial education by Booker T Washington. With him, higher educational training would provide black leadership.

Bois alternate vision concerning the racial progress of black Americans brought a lot of benefits to them. He was a founding member of the NAACP. This is one of the important groups that fight for the rights of blacks from 1909 to date. Again, he waged a war against racism in America by writing many pieces against the practice of lynching. As a result, it called for the attention of the nation which led to a right that protects blacks against lynching. More so, he edited the Crisis Magazine and published seminal studies such as “the Philadelphia negro which is the first case study of blacks”. (NBCBLK, 2017). Again, he organized several Pan African Congress to free Africans from the hands of Europeans power. This thus led to the freedom of many blacks. More so, he encourages blacks to get an education in order to fit in the white society. He emphases on higher education where he believes it is a way to raise many blacks as leaders. For example, The Ten Talented. He was a co-founder of the Niagara Movement which was a black civil rights organization against the Atlanta Compromise.

Although W.E.B Dubois alternate racial progress of black Americans was beneficiary, there was some limitations. In 1945, only the preparation was made toward his Encyclopedia Africana project, but “he had been working for decades”( Elliot Rudwick, 2019). There was not enough capital to expends his vision such as the designed to bring a sense of unity to the African diaspora in his Encyclopaedia Africana project.

In conclusion, W.E.B. Dubois played a vital role to change the lives of blacks in the U.S. today, men of all races have an equal right because of his assimilation policy. Because of his alternate political vision, there is right to vote, less discrimination in color, race, and ethnicity, more educator and leaders amongst blacks.