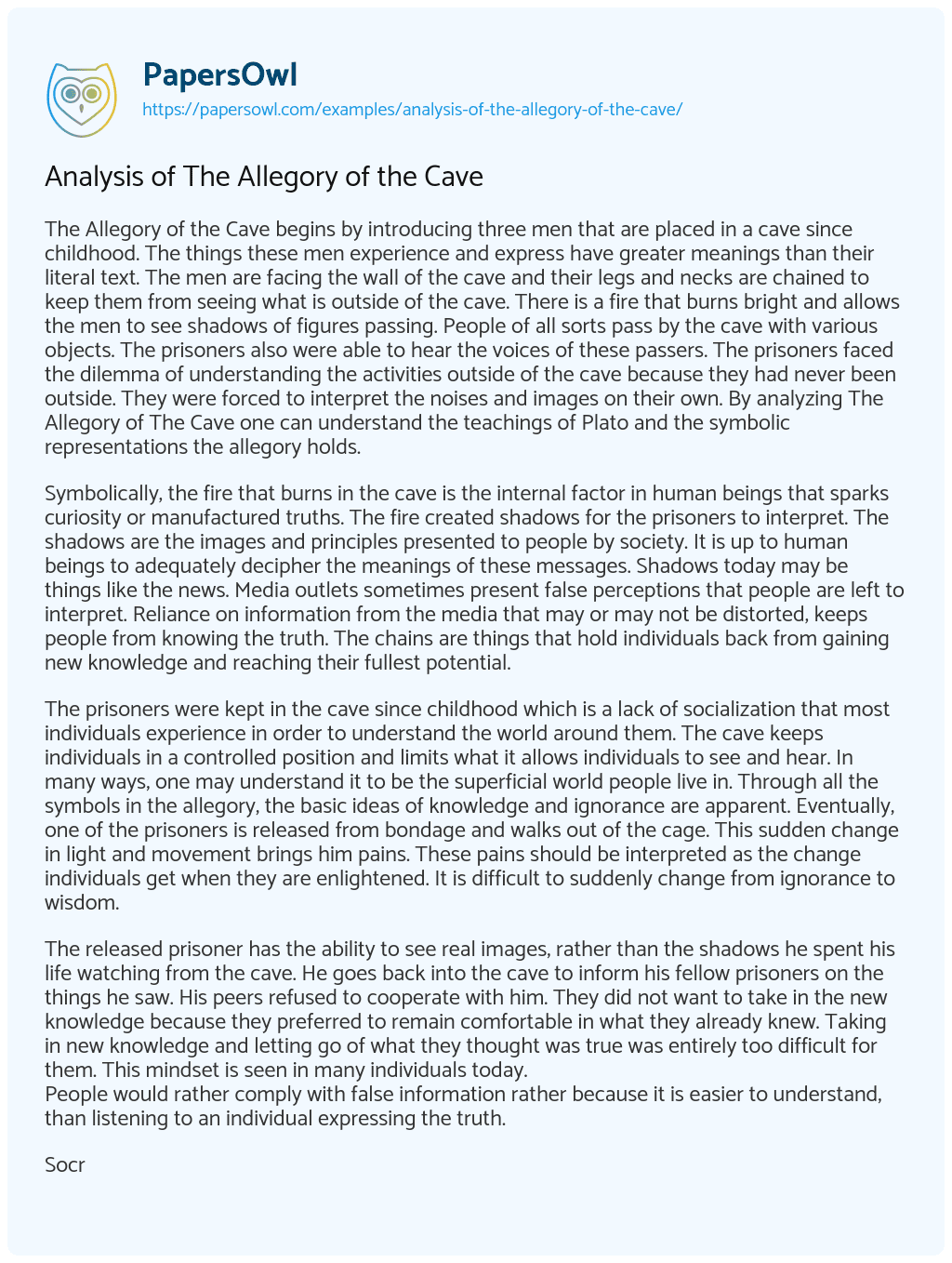 The Allegory of the Cave begins by introducing three men that are placed in a cave since childhood. The things these men experience and express have greater meanings than their literal text. The men are facing the wall of the cave and their legs and necks are chained to keep them from seeing what is outside of the cave. There is a fire that burns bright and allows the men to see shadows of figures passing. People of all sorts pass by the cave with various objects. The prisoners also were able to hear the voices of these passers. The prisoners faced the dilemma of understanding the activities outside of the cave because they had never been outside. They were forced to interpret the noises and images on their own. By analyzing The Allegory of The Cave one can understand the teachings of Plato and the symbolic representations the allegory holds.

Symbolically, the fire that burns in the cave is the internal factor in human beings that sparks curiosity or manufactured truths. The fire created shadows for the prisoners to interpret. The shadows are the images and principles presented to people by society. It is up to human beings to adequately decipher the meanings of these messages. Shadows today may be things like the news. Media outlets sometimes present false perceptions that people are left to interpret. Reliance on information from the media that may or may not be distorted, keeps people from knowing the truth. The chains are things that hold individuals back from gaining new knowledge and reaching their fullest potential.

The prisoners were kept in the cave since childhood which is a lack of socialization that most individuals experience in order to understand the world around them. The cave keeps individuals in a controlled position and limits what it allows individuals to see and hear. In many ways, one may understand it to be the superficial world people live in. Through all the symbols in the allegory, the basic ideas of knowledge and ignorance are apparent. Eventually, one of the prisoners is released from bondage and walks out of the cage. This sudden change in light and movement brings him pains. These pains should be interpreted as the change individuals get when they are enlightened. It is difficult to suddenly change from ignorance to wisdom.

The released prisoner has the ability to see real images, rather than the shadows he spent his life watching from the cave. He goes back into the cave to inform his fellow prisoners on the things he saw. His peers refused to cooperate with him. They did not want to take in the new knowledge because they preferred to remain comfortable in what they already knew. Taking in new knowledge and letting go of what they thought was true was entirely too difficult for them. This mindset is seen in many individuals today.
People would rather comply with false information rather because it is easier to understand, than listening to an individual expressing the truth.

Socrates says, “And if there were a contest, and he had to compete in measuring the shadows, with the prisoners who had never moved out of the cave, while his sight was still weak, and before his eyes had become steady … would he not make himself ridiculous? Men would say of him that he had returned from the place above with his eyes ruined; and that it was better not even to think of ascending; and if anyone tried to lose another and lead him to the light, let them only catch the offender, and they would put him to death” (Plato 749).

The allegory explains how individuals in society are like the prisoner who is freed from the cave and ultimately understand the true realities of what happens outside of the cave. The prisoner comes back to tell the others of the magnificent things he has seen but the other prisoners do not want to hear it. Individuals in society like the other prisoners are choose not to see the true realities of society. The light that allows the prisoners to see the shadows is the human condition that human beings experience through the senses. The passage tells the reader that those who acquire knowledge and try to spread their knowledge to others may be judged because others may find discomfort in the truth. Individuals fear knowledge because it can take away a certain comfort or preconceived belief.

All in all, Plato’s The Allegory of the Cave can be perceived in many ways but it still relates to society today. Plato urges individuals to look beyond what they know as comfortable and question what they think may be the truth. He also encourages the enlightened individuals to bring others towards the light regardless of how reluctant they may be. The people in the cave may want to stay in the cave to remain comfortable. Plato uses many literary devices to properly convey his message. It can be concluded that in today’s society Plato’s message is relevant and necessary for enlightened individuals who are not using their knowledge to aid others.

Analysis of The Allegory of the Cave. (2021, Mar 13). Retrieved from https://papersowl.com/examples/analysis-of-the-allegory-of-the-cave/

Allegory of the Cave Analysis