Hillary Clinton and her Speech about Human Rights 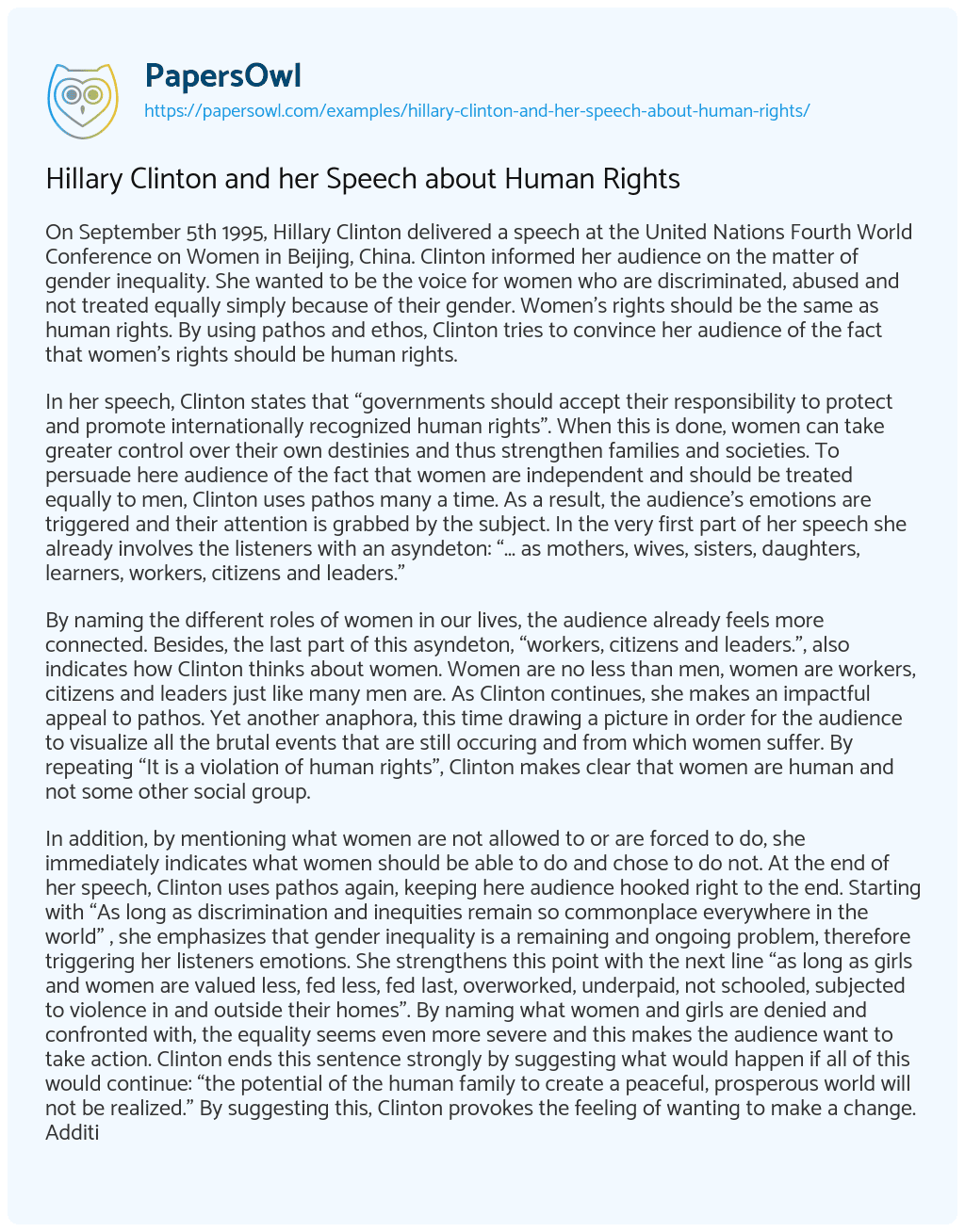 On September 5th 1995, Hillary Clinton delivered a speech at the United Nations Fourth World Conference on Women in Beijing, China. Clinton informed her audience on the matter of gender inequality. She wanted to be the voice for women who are discriminated, abused and not treated equally simply because of their gender. Women’s rights should be the same as human rights. By using pathos and ethos, Clinton tries to convince her audience of the fact that women’s rights should be human rights.

In her speech, Clinton states that “governments should accept their responsibility to protect and promote internationally recognized human rights”. When this is done, women can take greater control over their own destinies and thus strengthen families and societies. To persuade here audience of the fact that women are independent and should be treated equally to men, Clinton uses pathos many a time. As a result, the audience’s emotions are triggered and their attention is grabbed by the subject. In the very first part of her speech she already involves the listeners with an asyndeton: “… as mothers, wives, sisters, daughters, learners, workers, citizens and leaders.”

By naming the different roles of women in our lives, the audience already feels more connected. Besides, the last part of this asyndeton, “workers, citizens and leaders.”, also indicates how Clinton thinks about women. Women are no less than men, women are workers, citizens and leaders just like many men are. As Clinton continues, she makes an impactful appeal to pathos. Yet another anaphora, this time drawing a picture in order for the audience to visualize all the brutal events that are still occuring and from which women suffer. By repeating “It is a violation of human rights”, Clinton makes clear that women are human and not some other social group.

In addition, by mentioning what women are not allowed to or are forced to do, she immediately indicates what women should be able to do and chose to do not. At the end of her speech, Clinton uses pathos again, keeping here audience hooked right to the end. Starting with “As long as discrimination and inequities remain so commonplace everywhere in the world” , she emphasizes that gender inequality is a remaining and ongoing problem, therefore triggering her listeners emotions. She strengthens this point with the next line “as long as girls and women are valued less, fed less, fed last, overworked, underpaid, not schooled, subjected to violence in and outside their homes”. By naming what women and girls are denied and confronted with, the equality seems even more severe and this makes the audience want to take action. Clinton ends this sentence strongly by suggesting what would happen if all of this would continue: “the potential of the human family to create a peaceful, prosperous world will not be realized.” By suggesting this, Clinton provokes the feeling of wanting to make a change. Additionally, this indicates that equally treated women would be the key to making a thriving world.

Besides pathos, Clinton also makes use of ethos. Clinton shows she has been an activists for the rights of women by saying “Over the past 25 years, I have worked persistently on issues relating women, children and families.” Because she mentions the 25 years, she seems even more trustworthy. Furthermore, the anaphora “I have met women in…” shows credibility as well, she has met many women in different positions. Moreover, in these lines Clinton shows what women are capable of regardless of difficult situations. As she continues, not only does she use ethos in “reaffirmed at Vienna”, she follows this up by stating an important claim: “both women and men are entitled to a range of protections and personal freedoms …” In this, Clinton points out that women have equal rights to men. By using ethos, Clinton is more likely to effectively persuade her public because everything she says, seems reliable.

A reoccuring theme in this speech is silence and speech. By using keywords like “listen”, “voices”, “silence”, “say”, “hear”, “words”, “echoes” and “speak”, Clinton maintains this theme throughout her whole speech. Additionally, metaphorical expressions such as “to give voice to”, “break the silence”, “to silence our words”, speak freely” and “call to action” imply the need of breaking the silence and give voice to the violence and gender inequality women endure. Besides this, this theme is also a metaphor for the fact that women are not listened to and deserve to speak up. Silence not only in the meaning of women not being allowed to speak up, but also being ignored despite talking. In this way, Clinton indirectly shows that a woman’s voice should not go unnoticed, quite the contrary, they have the right to be heard.

In conclusion, the use of pathos and ethos greatly contributes to Clinton’s measurement of persuasiveness. Pathos prevails in this speech, for good reason. By triggering the audience’s emotions, they will be more likely to decisively take action. Ethos ensures Clinton’s credibility. As a result of this credibility, the public is more likely to agree with her when she expresses her thoughts on gender equality. Lastly, the theme of silence and speech helps convey the message that women are independent and have the right to be heard. By portraying what women go through, Clinton clarifies how strong and independent women are thus echoing forth the message that human rights are women’s rights and women’s rights are human rights.

Hillary Clinton and her Speech about Human Rights. (2020, Aug 25). Retrieved from https://papersowl.com/examples/hillary-clinton-and-her-speech-about-human-rights/

How do Gender Sexuality Matter in Relation to Human Rights

Human Rights in the United States