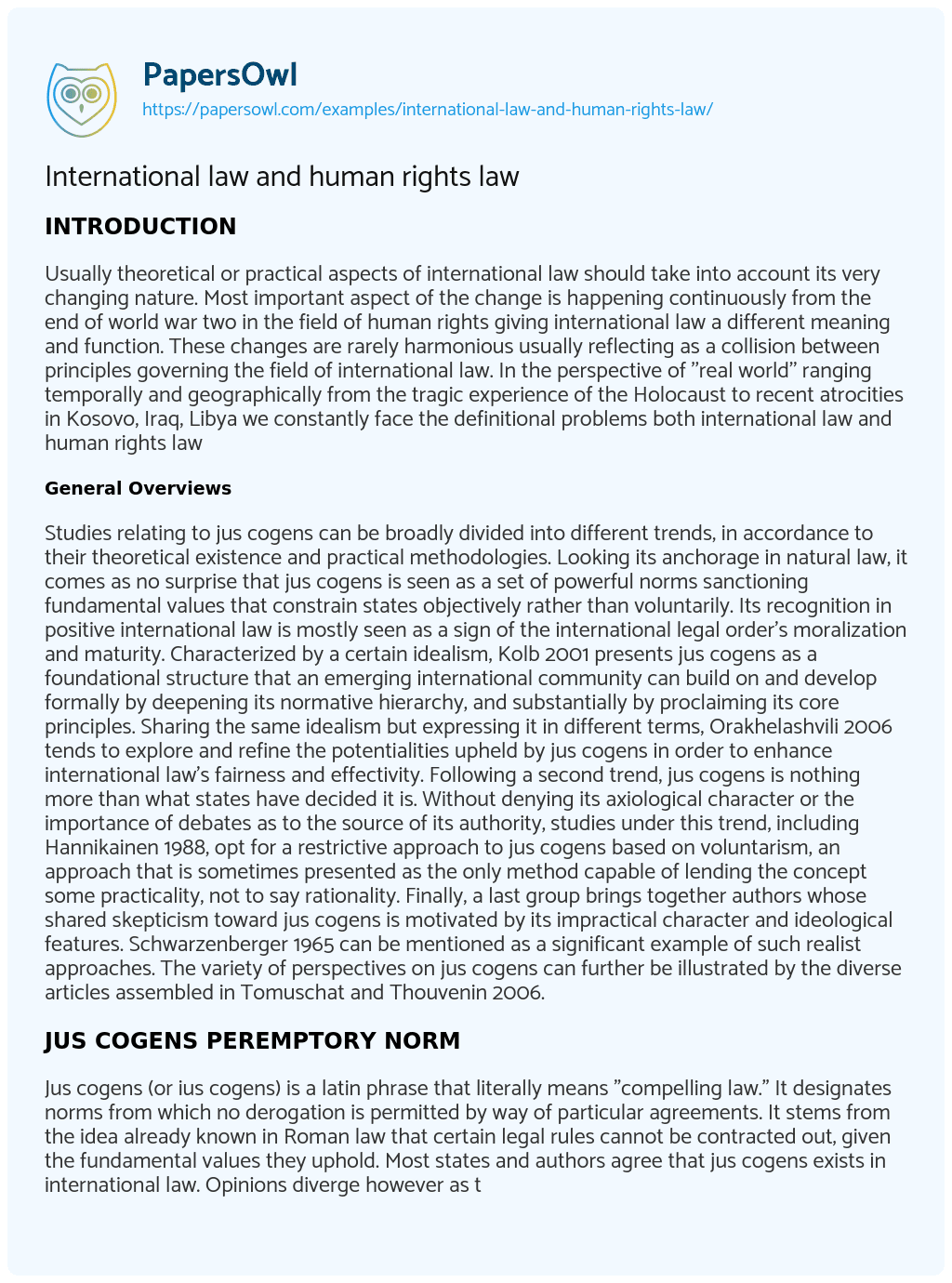 Studies relating to jus cogens can be broadly divided into different trends, in accordance to their theoretical existence and practical methodologies. Looking its anchorage in natural law, it comes as no surprise that jus cogens is seen as a set of powerful norms sanctioning fundamental values that constrain states objectively rather than voluntarily. Its recognition in positive international law is mostly seen as a sign of the international legal order’s moralization and maturity. Characterized by a certain idealism, Kolb 2001 presents jus cogens as a foundational structure that an emerging international community can build on and develop formally by deepening its normative hierarchy, and substantially by proclaiming its core principles. Sharing the same idealism but expressing it in different terms, Orakhelashvili 2006 tends to explore and refine the potentialities upheld by jus cogens in order to enhance international law’s fairness and effectivity. Following a second trend, jus cogens is nothing more than what states have decided it is. Without denying its axiological character or the importance of debates as to the source of its authority, studies under this trend, including Hannikainen 1988, opt for a restrictive approach to jus cogens based on voluntarism, an approach that is sometimes presented as the only method capable of lending the concept some practicality, not to say rationality. Finally, a last group brings together authors whose shared skepticism toward jus cogens is motivated by its impractical character and ideological features. Schwarzenberger 1965 can be mentioned as a significant example of such realist approaches. The variety of perspectives on jus cogens can further be illustrated by the diverse articles assembled in Tomuschat and Thouvenin 2006.

Jus cogens (or ius cogens) is a latin phrase that literally means “compelling law.” It designates norms from which no derogation is permitted by way of particular agreements. It stems from the idea already known in Roman law that certain legal rules cannot be contracted out, given the fundamental values they uphold. Most states and authors agree that jus cogens exists in international law. Opinions diverge however as to its exact content, sources, means of identification, and application, as well as to its precise effects and role within the international legal order. Despite persistent debates on these matters, jus cogens is now referred to in several legal instruments within and beyond the law of treaties. The 1969 and 1986 Vienna Conventions on the Law of Treaties stipulate that a treaty is void if it conflicts with jus cogens (Art. 53 and 64).

There is no universal agreement regarding precisely which norms are jus cogens nor how a norm reaches that status, but it is generally accepted that jus cogens includes the prohibition of genocide, maritime piracy, enslaving in general (to include slavery as well as the slave trade), torture, refoulement and wars of aggression and territorial aggrandizement. Recent scholarship has also proposed the idea of regional jus cogens.

As we all know that Human rights are rights inherent to all human beings, whatever our nationality, place of residence, sex, national or ethnic origin, colour, religion, language, or any other status. We are all equally entitled to our human rights without discrimination.

Therefore, these rights are always interrelated, interdependent and indivisible. For instance, in my country Kenya human rights are often expressed and guaranteed by law, in the forms of treaties, customary international law, general principles and other sources of international law. International human rights law lays down obligations of Governments to act in certain ways or to refrain from certain acts, in order to promote and protect human rights and fundamental freedoms of individuals or groups.

International human rights are often guaranteed by law, in the forms of treaties, general principles and other sources of international law, which lay down obligations of governments to promote and protect human rights and fundamental freedoms of individuals or groups.

Fifty years ago, December 10,1948 United Nation General Assembly adopted the Universal Declaration of Human Rights (UDHR). At that time, delegates noted that the Declaration was never bonded. Eleanor Roosevelt said that ”set up a common standard of achievement for all people and all nations,” and might well become an international Magna Carta of all mankind (Humphrey 1984). It saddens from the word go that UDHR was not so much binding across the world and in a way, this has been one of the reasons why we have a lot of atrocities on human rights violation across the World.

On 7 March 2011, Pre-Trial Chamber I unanimously decided to confirm the charges of war crimes brought by the ICC’s Prosecutor against Abdallah Banda and committed him to trial. Though Mr Banda appeared voluntarily before the ICC during the Pre-Trial stage of his case, on 11 September 2014, the Trial Chamber judges issued an arrest warrant to ensure his presence at trial. The Chamber stressed that should Mr Banda nonetheless appear voluntarily before the Court, the Chamber will take the voluntary appearance into consideration and revisit accordingly the conditions of his stay in The Netherlands during the trial. The accused is still at large.

Next steps: The trial will commence pending the accused’s arrest or voluntary appearance. The ICC does not try individuals in their absence.

We cannot forget to talk about Jean Bemba of Central Africa Republic, he was acquitted On 8 June 2018, the Appeals Chamber of the International Criminal Court decided, by majority, to acquit Jean-Pierre Bemba Gombo from the charges of war crimes and crimes against humanity.

Another example of crime against humanity is post-election violence in Kenya 2007/2008 where the current president was involved.

Next steps: The case is considered closed unless and until the Prosecutor submits new evidence.

Ahmed Agiza, an Egyptian national, left Egypt in 1991 after he was arrested and tortured due to family connections with persons involved with the assassination of the president in 1981. Agiza and his family travelled to many countries, before seeking an asylum in Sweden on 23 September 2000. He was convicted of terrorism offences in Egypt in absentia in 1998. The Migration Board and Security Police in Sweden investigated Agiza’s security status and determined that he was a member of a terrorist organization and he was then deported back to Egypt. There was evidence submitted to the effect that Agiza was then subjected to torture by Egyptian authorities. This was one of the first cases in which the UN Committee on Torture found procedural breaches of Article 22, and one of the few in which a violation of Article 3 was found. These findings may indicate a high level of disapproval by the CAT Committee of Sweden’s actions, as well as a desire to confirm the absolute nature of the prohibition on torture, regardless of the supposed exigencies of the war on terror.

Jus cogens norm also qualifies to be domestic human rights norm in such a way that it protects people from being enslaved by others an example of case law is Koraou v. Niger.

Ms Hadijatou Mani Koraou was sold by a tribal chief in a private customary transaction known as wahiya for 240,000 CFA in 1996 when she was about 12 years old, making her the slave girl or sadaka of her purchaser. Working in the fields of her purchaser and suffering her first sexual assault from him when she was barely 13 years old, Ms Koraou remained as sadaka for nine years and bore four children for him. Following the issuance of a liberation certificate by her purchaser in 2005, Ms Koraou attempted to contract a valid marriage with another person but her previous owner insisted that Ms Koraou had committed bigamy since she became his lawful wife upon her liberation. Ms Koraou, her husband, and her brother were imprisoned. In relation to the question of slavery which formed the main thrust of the case, the ECOWAS Community Court of Justice began its analyses by recognizing slavery as a violation of human rights. However, it had to innovate to find relevant case law drawing inspiration from international criminal law for purposes of elaborating on the definition of slavery.

In conclusion jus cogens qualifies as a domestic human rights norm in that it should cover international human rights law and humanitarian law where the rights of those individuals involved in crimes against humanity should be accorded some humanistic rights. This will also help in curbing issues of terrorism and other international criminal law violations.

International law and human rights law. (2020, May 13). Retrieved from https://papersowl.com/examples/international-law-and-human-rights-law/

The 14th Amendment: a Discourse on Human Rights

Human Rights in the Era of Globalization