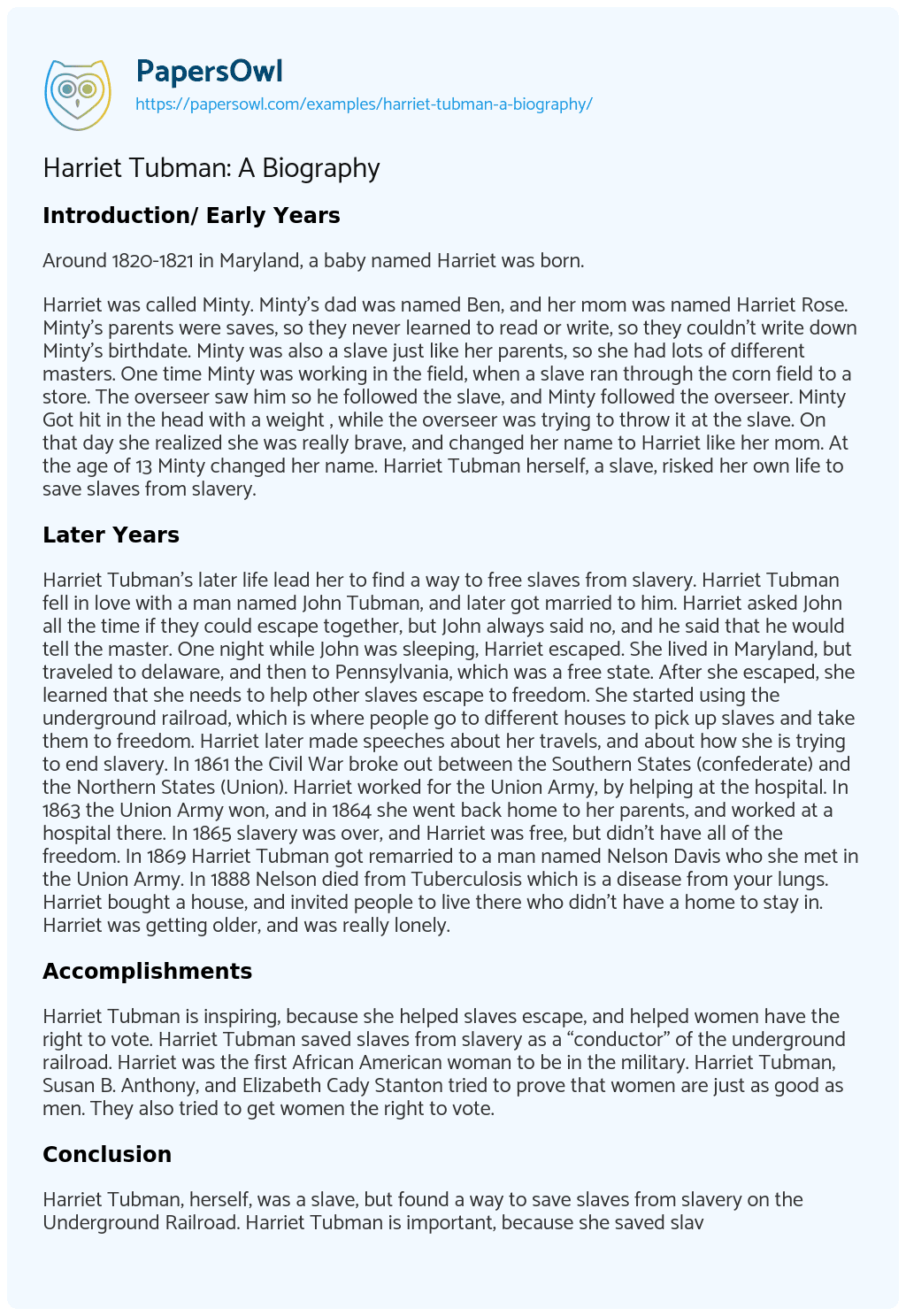 Harriet was called Minty. Minty’s dad was named Ben, and her mom was named Harriet Rose. Minty’s parents were saves, so they never learned to read or write, so they couldn’t write down Minty’s birthdate. Minty was also a slave just like her parents, so she had lots of different masters. One time Minty was working in the field, when a slave ran through the corn field to a store. The overseer saw him so he followed the slave, and Minty followed the overseer. Minty Got hit in the head with a weight , while the overseer was trying to throw it at the slave. On that day she realized she was really brave, and changed her name to Harriet like her mom. At the age of 13 Minty changed her name. Harriet Tubman herself, a slave, risked her own life to save slaves from slavery.

Harriet Tubman’s later life lead her to find a way to free slaves from slavery. Harriet Tubman fell in love with a man named John Tubman, and later got married to him. Harriet asked John all the time if they could escape together, but John always said no, and he said that he would tell the master. One night while John was sleeping, Harriet escaped. She lived in Maryland, but traveled to delaware, and then to Pennsylvania, which was a free state. After she escaped, she learned that she needs to help other slaves escape to freedom. She started using the underground railroad, which is where people go to different houses to pick up slaves and take them to freedom. Harriet later made speeches about her travels, and about how she is trying to end slavery. In 1861 the Civil War broke out between the Southern States (confederate) and the Northern States (Union). Harriet worked for the Union Army, by helping at the hospital. In 1863 the Union Army won, and in 1864 she went back home to her parents, and worked at a hospital there. In 1865 slavery was over, and Harriet was free, but didn’t have all of the freedom. In 1869 Harriet Tubman got remarried to a man named Nelson Davis who she met in the Union Army. In 1888 Nelson died from Tuberculosis which is a disease from your lungs. Harriet bought a house, and invited people to live there who didn’t have a home to stay in. Harriet was getting older, and was really lonely.

There are many interesting things about Harriet Tubman. Harriet Tubman is called “Moses” of her people, because she lead slaves to freedom, just like Moses did. In 1920, women were finally allowed to vote. Harriet never lost a passenger on the Underground Railroad. Harriet’s childhood nickname was Minty.