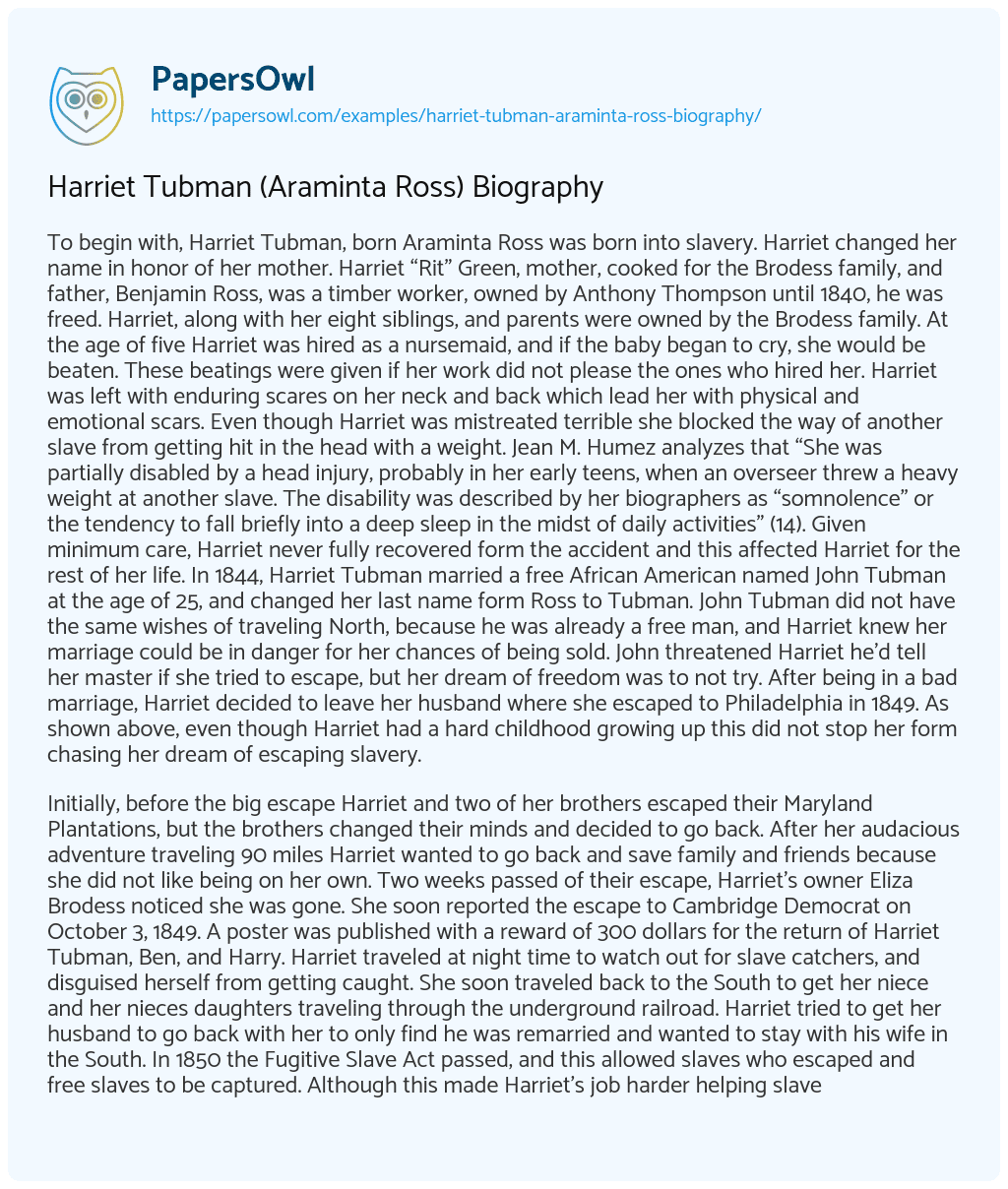 To begin with, Harriet Tubman, born Araminta Ross was born into slavery. Harriet changed her name in honor of her mother. Harriet “Rit” Green, mother, cooked for the Brodess family, and father, Benjamin Ross, was a timber worker, owned by Anthony Thompson until 1840, he was freed. Harriet, along with her eight siblings, and parents were owned by the Brodess family. At the age of five Harriet was hired as a nursemaid, and if the baby began to cry, she would be beaten. These beatings were given if her work did not please the ones who hired her. Harriet was left with enduring scares on her neck and back which lead her with physical and emotional scars. Even though Harriet was mistreated terrible she blocked the way of another slave from getting hit in the head with a weight. Jean M. Humez analyzes that “She was partially disabled by a head injury, probably in her early teens, when an overseer threw a heavy weight at another slave. The disability was described by her biographers as “somnolence” or the tendency to fall briefly into a deep sleep in the midst of daily activities” (14). Given minimum care, Harriet never fully recovered form the accident and this affected Harriet for the rest of her life. In 1844, Harriet Tubman married a free African American named John Tubman at the age of 25, and changed her last name form Ross to Tubman. John Tubman did not have the same wishes of traveling North, because he was already a free man, and Harriet knew her marriage could be in danger for her chances of being sold. John threatened Harriet he’d tell her master if she tried to escape, but her dream of freedom was to not try. After being in a bad marriage, Harriet decided to leave her husband where she escaped to Philadelphia in 1849. As shown above, even though Harriet had a hard childhood growing up this did not stop her form chasing her dream of escaping slavery.

Initially, before the big escape Harriet and two of her brothers escaped their Maryland Plantations, but the brothers changed their minds and decided to go back. After her audacious adventure traveling 90 miles Harriet wanted to go back and save family and friends because she did not like being on her own. Two weeks passed of their escape, Harriet’s owner Eliza Brodess noticed she was gone. She soon reported the escape to Cambridge Democrat on October 3, 1849. A poster was published with a reward of 300 dollars for the return of Harriet Tubman, Ben, and Harry. Harriet traveled at night time to watch out for slave catchers, and disguised herself from getting caught. She soon traveled back to the South to get her niece and her nieces daughters traveling through the underground railroad. Harriet tried to get her husband to go back with her to only find he was remarried and wanted to stay with his wife in the South. In 1850 the Fugitive Slave Act passed, and this allowed slaves who escaped and free slaves to be captured. Although this made Harriet’s job harder helping slaves escape, she did not give up. They had to travel more North leading to Canada during the night. Harriet became on her own and started her own Underground Railroad Network which lead her to making new friends with different abolitionists. 300 slaves and 19 trips by Harriet Tubman were made during her time using the underground railroad to set her loved one’s friends and some she did not know to freedom. While the Civil War began in 1863, Harriet served as a nurse, spy, and cook. She knew the land well and found new ways to set slaves to their freedom. Harriet became head of surveillance for the Union Army in 1863, and informed the commanders about Confederate Army direct traveling places and resources. As one can see Harriet Tubman had some difficulties thrown her way she did not give up and tried even harder.

Lastly, in Harriet Tubman’s later years she settled down in New York with some family and friends on land she owned after the Civil War. She then remarried to a former slave named Nelson Davis in 1869. Although, Harriet help set slaves to their freedom, contributed in the Civil War by severing as a nurse, spy and cook, she was not finished yet. Fighting for Women’s Rights Movement began in 1848 lasting until 1920. This prevented women the right to vote and the freedom they deserved. Harriet became a supporter of the Women’s Suffrage Movement, and began to help rise funds with avictities such as Susan B. Anthony and Elizabeth Cady Stanton. Tubman gave speeches at various occasions speaking on the behalf of everyone woman. Harriet Tubman also participated in the NACWC known as the National Association of Colored Women establishing on July, 1896. This campaign began because while the Women’s Suffrage Movement mainly focused on white women, and forgot that African American women were overseen in that organization. For fighting for serval years all women gained their rights to vote. As shown above, Harriet Tubman was a major influence then and still today in never giving up on her dream.