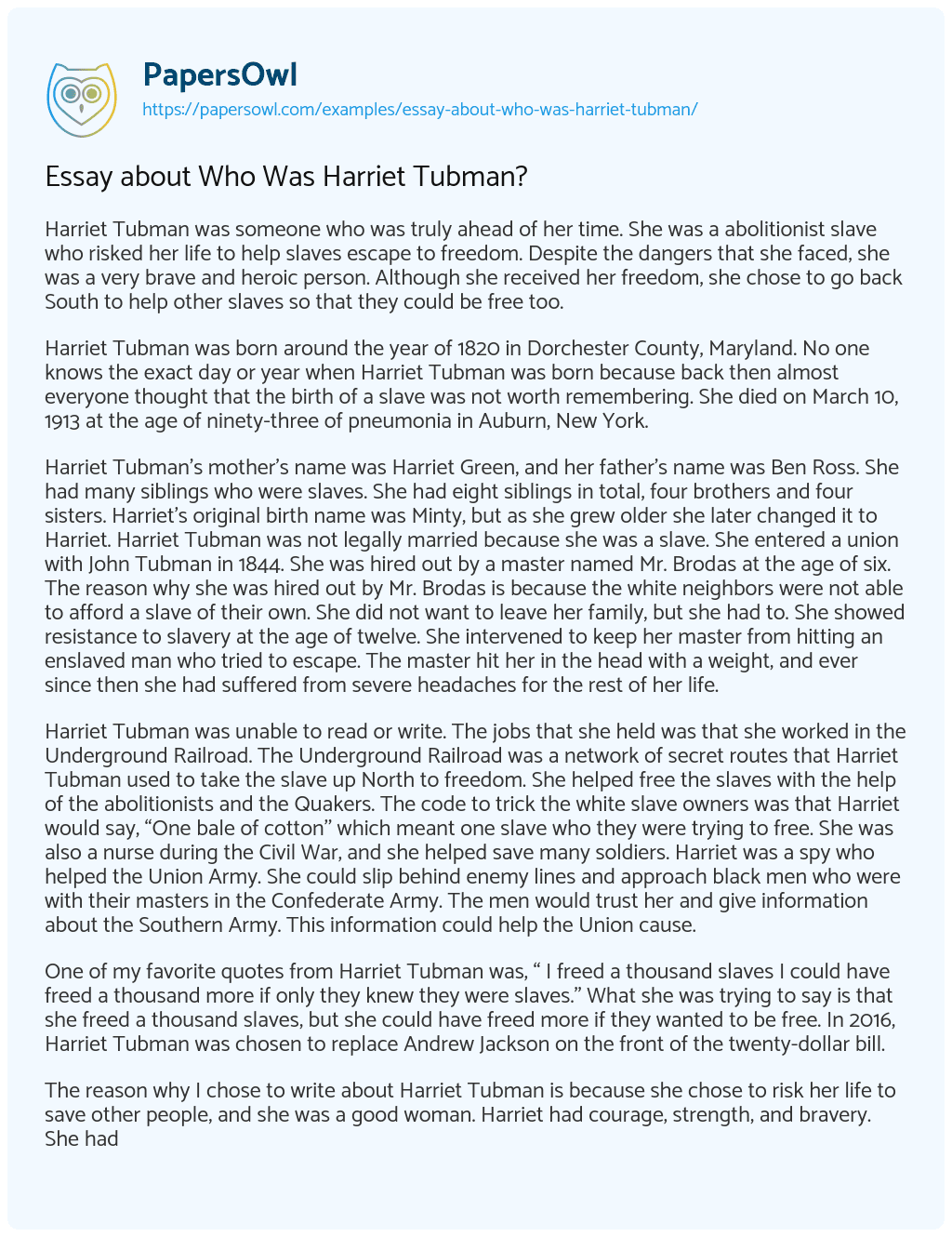 Harriet Tubman was someone who was truly ahead of her time. She was a abolitionist slave who risked her life to help slaves escape to freedom. Despite the dangers that she faced, she was a very brave and heroic person. Although she received her freedom, she chose to go back South to help other slaves so that they could be free too.

Harriet Tubman was born around the year of 1820 in Dorchester County, Maryland. No one knows the exact day or year when Harriet Tubman was born because back then almost everyone thought that the birth of a slave was not worth remembering. She died on March 10, 1913 at the age of ninety-three of pneumonia in Auburn, New York.

Harriet Tubman’s mother’s name was Harriet Green, and her father’s name was Ben Ross. She had many siblings who were slaves. She had eight siblings in total, four brothers and four sisters. Harriet’s original birth name was Minty, but as she grew older she later changed it to Harriet. Harriet Tubman was not legally married because she was a slave. She entered a union with John Tubman in 1844. She was hired out by a master named Mr. Brodas at the age of six. The reason why she was hired out by Mr. Brodas is because the white neighbors were not able to afford a slave of their own. She did not want to leave her family, but she had to. She showed resistance to slavery at the age of twelve. She intervened to keep her master from hitting an enslaved man who tried to escape. The master hit her in the head with a weight, and ever since then she had suffered from severe headaches for the rest of her life.

Harriet Tubman was unable to read or write. The jobs that she held was that she worked in the Underground Railroad. The Underground Railroad was a network of secret routes that Harriet Tubman used to take the slave up North to freedom. She helped free the slaves with the help of the abolitionists and the Quakers. The code to trick the white slave owners was that Harriet would say, “One bale of cotton’’ which meant one slave who they were trying to free. She was also a nurse during the Civil War, and she helped save many soldiers. Harriet was a spy who helped the Union Army. She could slip behind enemy lines and approach black men who were with their masters in the Confederate Army. The men would trust her and give information about the Southern Army. This information could help the Union cause.

The reason why I chose to write about Harriet Tubman is because she chose to risk her life to save other people, and she was a good woman. Harriet had courage, strength, and bravery. She had a fierce devotion for the freedom of her people. She was ahead of her time because she wanted people to be free, and to live independent lives.

Essay about Who Was Harriet Tubman?. (2021, Mar 04). Retrieved from https://papersowl.com/examples/essay-about-who-was-harriet-tubman/