Assignment 2: the Effects of Transracial Adoption 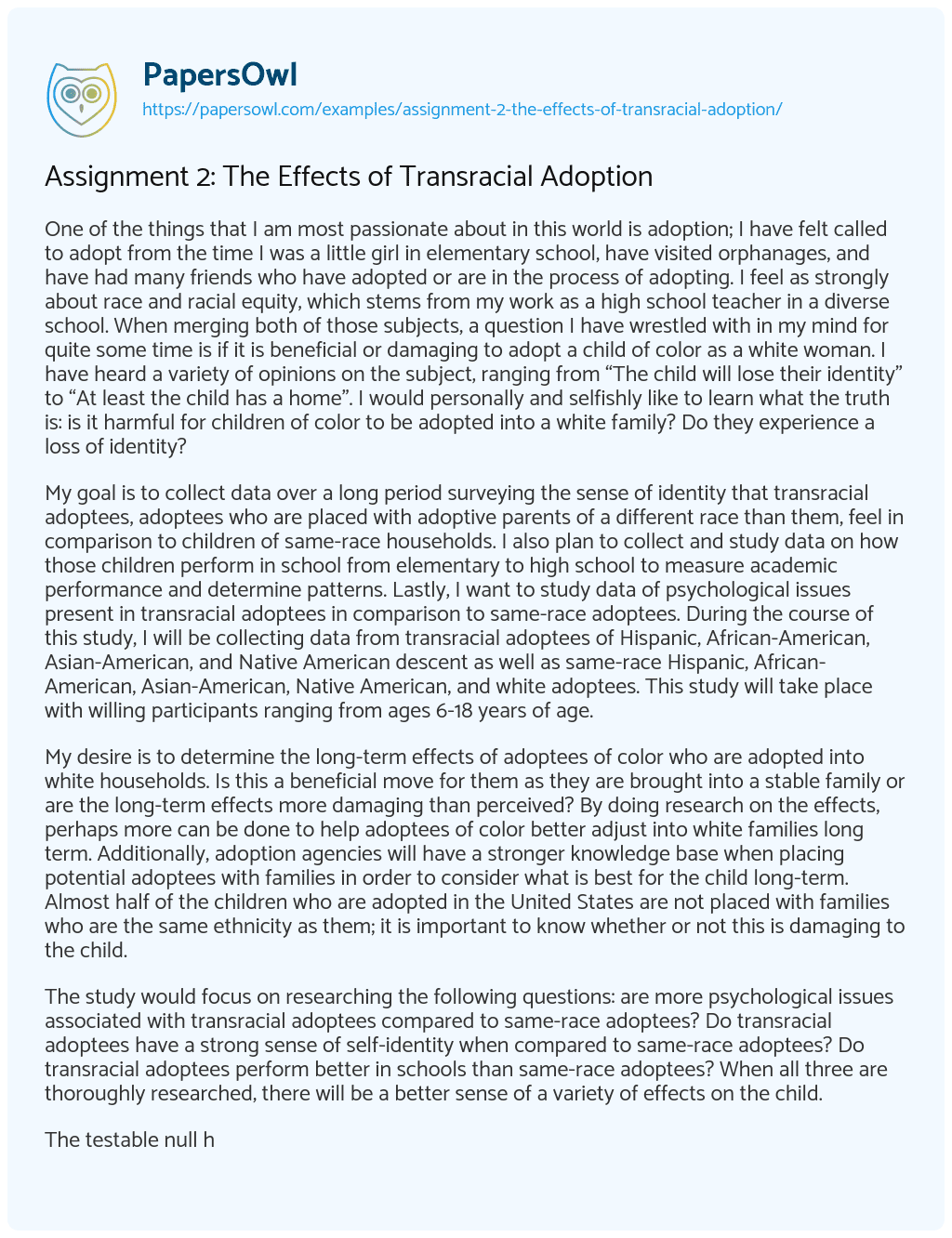 One of the things that I am most passionate about in this world is adoption; I have felt called to adopt from the time I was a little girl in elementary school, have visited orphanages, and have had many friends who have adopted or are in the process of adopting. I feel as strongly about race and racial equity, which stems from my work as a high school teacher in a diverse school. When merging both of those subjects, a question I have wrestled with in my mind for quite some time is if it is beneficial or damaging to adopt a child of color as a white woman. I have heard a variety of opinions on the subject, ranging from “The child will lose their identity” to “At least the child has a home”. I would personally and selfishly like to learn what the truth is: is it harmful for children of color to be adopted into a white family? Do they experience a loss of identity?

My goal is to collect data over a long period surveying the sense of identity that transracial adoptees, adoptees who are placed with adoptive parents of a different race than them, feel in comparison to children of same-race households. I also plan to collect and study data on how those children perform in school from elementary to high school to measure academic performance and determine patterns. Lastly, I want to study data of psychological issues present in transracial adoptees in comparison to same-race adoptees. During the course of this study, I will be collecting data from transracial adoptees of Hispanic, African-American, Asian-American, and Native American descent as well as same-race Hispanic, African-American, Asian-American, Native American, and white adoptees. This study will take place with willing participants ranging from ages 6-18 years of age.

My desire is to determine the long-term effects of adoptees of color who are adopted into white households. Is this a beneficial move for them as they are brought into a stable family or are the long-term effects more damaging than perceived? By doing research on the effects, perhaps more can be done to help adoptees of color better adjust into white families long term. Additionally, adoption agencies will have a stronger knowledge base when placing potential adoptees with families in order to consider what is best for the child long-term. Almost half of the children who are adopted in the United States are not placed with families who are the same ethnicity as them; it is important to know whether or not this is damaging to the child.

Transracial adoption is defined as the legal adoption of a child of one race being placed with a adoptive family who is of a different race than theirs. This could include two different categories of adoptees: domestic and international. Based on the most recent data provided by the Adoption and Foster Care Analysis and Reporting system through the Children’s Bureau, 59,430 children under the age of 18 were adopted domestically in 2017 (Adoption and Foster Care Statistics, 2018). The overwhelming majority of those were white, almost half at 49%. The next closest ethnicity adopted is Hispanic children at 21%, followed by African Americans at 17%, at quite a wide margin from white adopted children. This data holds true to the norm in adoption for years that white children are the preferred adoptees at an overwhelming majority; data as far back as 2004 reflects this pattern (Adoption and Foster Care Statistics, 2018, Marr, 2017, Papke, 2012). Black children in particular can wait at least five times longer to be adopted than white children (Coleen Butler-Sweets, 2011).

Of the many complicated facets of adoption, transracial adoption in particular has been controversial, with varying opinions on what is in the best interest of the child. Interestingly, who has been the least supportive of transracial adoption has been African American women (Lee, Crolley-Simic & Vonk, 2013, Lee, R, 2003). Most critics of transracial adoption have expressed a concern that even the most well-trained white families are not capable of helping their black child adjust to the world they will grow up in in terms of racism and systemic injustice (Colleen Butler-Sweets, 2011, Fogg-Davis, 2002, Sellers, R. M., Smith, M. A., Shelton, J. N., Rowley, S. A., & Chavous 1998). Research findings do support this, showing that transracial adoptees were more likely identify themselves with the culture of their adoptive parents than with their native culture (Ferrari, Ranieri, Barni, & Rosnati, 2015). For example, Black children will suffer identity confusion and struggle to accept or even like their blackness, instead wishing they were white (Butler-Sweet, 2011). White families cannot understand the deep psychological and emotional aspects of being black or any other racial minority in America, with all of the microaggressions and macroagressions people of color often face. Critics of transracial adoption have also questioned what the motivation is for white parents’ adoption of children of color and if the system of foster care and adoption is set up to benefit the white adoptive families. (Lee, Crolley-Simic & Vonk, 2013, Papke, 2012). D.R. Papke details the historical pattern of white social workers, lawyers, and other professionals who are involved in the adoptive process having most of the control over placement (Papke, 2012).

One of the most famous declarations against transracial adoption for black children in particular was through the NABSW, or the National Association of Black Social Workers (Hollingsworth, 1999, Lee, Crolley-Simic & Vonk, 2013, Hrapczynski & Leslie, 2018). The NABSW released a resolution detailing specific concerns against transracial adoption because black children were “cut off from the healthy development of themselves as black people” (Hollingsworth, 1999). They likened this to racial and cultural genocide due to the fact that these black children were being cut off from their culture. Later in 1994, the NABSW amended their views by including that transracial adoption was fine only as a last-resort alternative. Social workers in particular, who have an up close and personal look at the system, have detailed several concerns with the adoptive process in terms of institutional problems, as earlier pointed out with white people mostly being in power in the system. Firstly, it has been pointed out that there is a failure to recruit black families and work with them through the process of adopting. There has been a lot of criticism around black families being abandoned in terms of culture, as the institution of the foster care and adoption system is majority white (Lee, J., Crolley-Simic,, & Vonk, 2013, Lee, J., Vonk, Han & Jung, 2018, Papke, 2012).

The main concern of all parties involved with transracial adoption is the child’s formation of racial identity. Identity is defined as “one’s core aspect of selfhood or as a fundamental condition of social being; it’s something deep, basic, abiding, or foundational’” (Butler-Sweet, 2011). The term racial identity was defined by the MMRI as the part of the person’s self-concept that is related to her or his membership within a race…[including] both the significance the individual places on race in defining himself or herself and the individual’s interpretations of what it means to be [that race] (Sellers, Smith, M. A., Shelton, Rowley, & Chavous, 1998).

In terms of racial identity, research has shown that different racial groups construct identities in relationship to the stereotypes given to them by the dominant culture. In contrast to the dominant racial group of a culture, who can ignore their racial identity in terms of creating a personal identity, racial minorities often find that their race does indeed play a role in dictating the identity they are given by culture or their self-given personal identity (Butler-Sweet, 2011). For example, ethnic minorities are often listed by their ethnicity (ie. “They’re Mexican”, “They’re African-American”) when described, as opposed to their gender, career, personality, physicality, and so on. White people, as the majority culture, do not even consider this part of their identity. Race dictates power, social status, and privilege (Butler-Sweet, 2011, Ferrari, Ranier, Barni, & Rosnati, 2015).

The main criticism against transracial adoption is that the adoptees will suffer from racial identity loss as a result of being placed with a white family. They will instead develop a white psyche (Butler-Sweet, 2011). Racial identity is heavily impacted by the family sphere for minorities, especially for African-Americans (Papke, 2012, Ferrari., Ranieri, Barni, & Rosnati, 2015, Butler-Sweet, 2011). The family unit is responsible for preparing the children for prejudice they will encounter in the world, having conversations surrounding race, and teaching the children how to cope with and survive the racial prejudice they will encounter at some point without losing their racial identity, which is why it is important to consider what home adopted children are placed into.

Assignment 2: The Effects of Transracial Adoption. (2021, Mar 04). Retrieved from https://papersowl.com/examples/assignment-2-the-effects-of-transracial-adoption/

The Effects of Transracial Adoption

Transracial Adoption in the United States

Should Transracial Adoption be Allowed