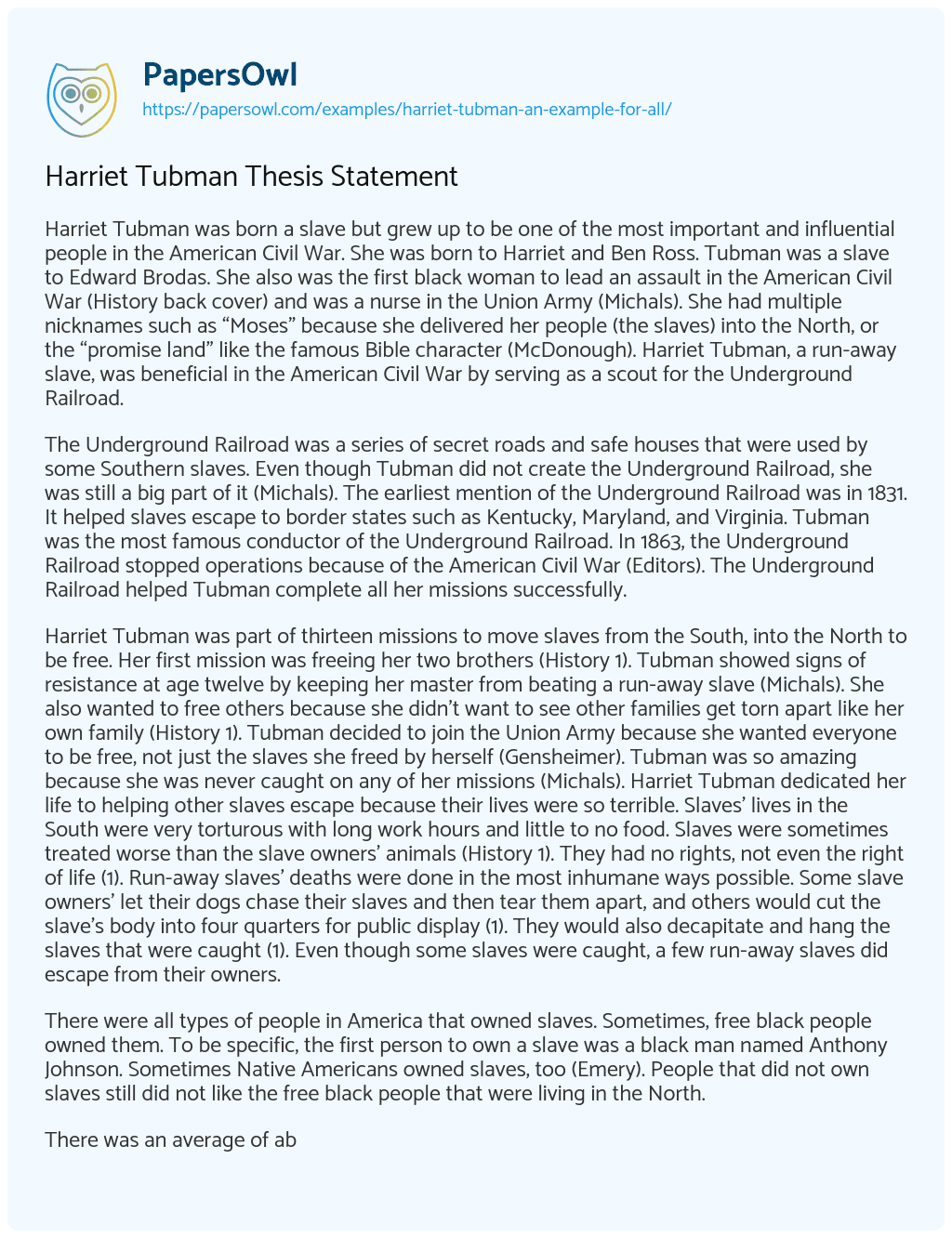 Harriet Tubman was part of thirteen missions to move slaves from the South, into the North to be free. Her first mission was freeing her two brothers (History 1). Tubman showed signs of resistance at age twelve by keeping her master from beating a run-away slave (Michals). She also wanted to free others because she didn’t want to see other families get torn apart like her own family (History 1). Tubman decided to join the Union Army because she wanted everyone to be free, not just the slaves she freed by herself (Gensheimer). Tubman was so amazing because she was never caught on any of her missions (Michals). Harriet Tubman dedicated her life to helping other slaves escape because their lives were so terrible. Slaves’ lives in the South were very torturous with long work hours and little to no food. Slaves were sometimes treated worse than the slave owners’ animals (History 1). They had no rights, not even the right of life (1). Run-away slaves’ deaths were done in the most inhumane ways possible. Some slave owners’ let their dogs chase their slaves and then tear them apart, and others would cut the slave’s body into four quarters for public display (1). They would also decapitate and hang the slaves that were caught (1). Even though some slaves were caught, a few run-away slaves did escape from their owners.

There was an average of about 180,000 free African Americans serving in the Union Army during the American Civil War. That was almost ten percent of the whole army. One of the black people that served in the Union Army was Harriet Tubman. At first, the black soldiers were turned away because of a Federal Law in 1792 that prevented black people from bearing arms. Black people also faced many other problems when they served the Union. Even though they were free, Confederate generals threatened to enslave the free black men if they were taken as prisoners during the war (Freeman).

The Underground railroad was successful, and many slaves were freed because of Harriet Tubman. Tubman said, “I had reasoned this out in my mind, there was one of two things I had a right to, liberty or death; if I could not have one, I would have the other”. This explains her commitment to help free slaves. She risked her life daily for others. Tubman worked hard for all slaves’ freedom and has set an amazing example for everyone.