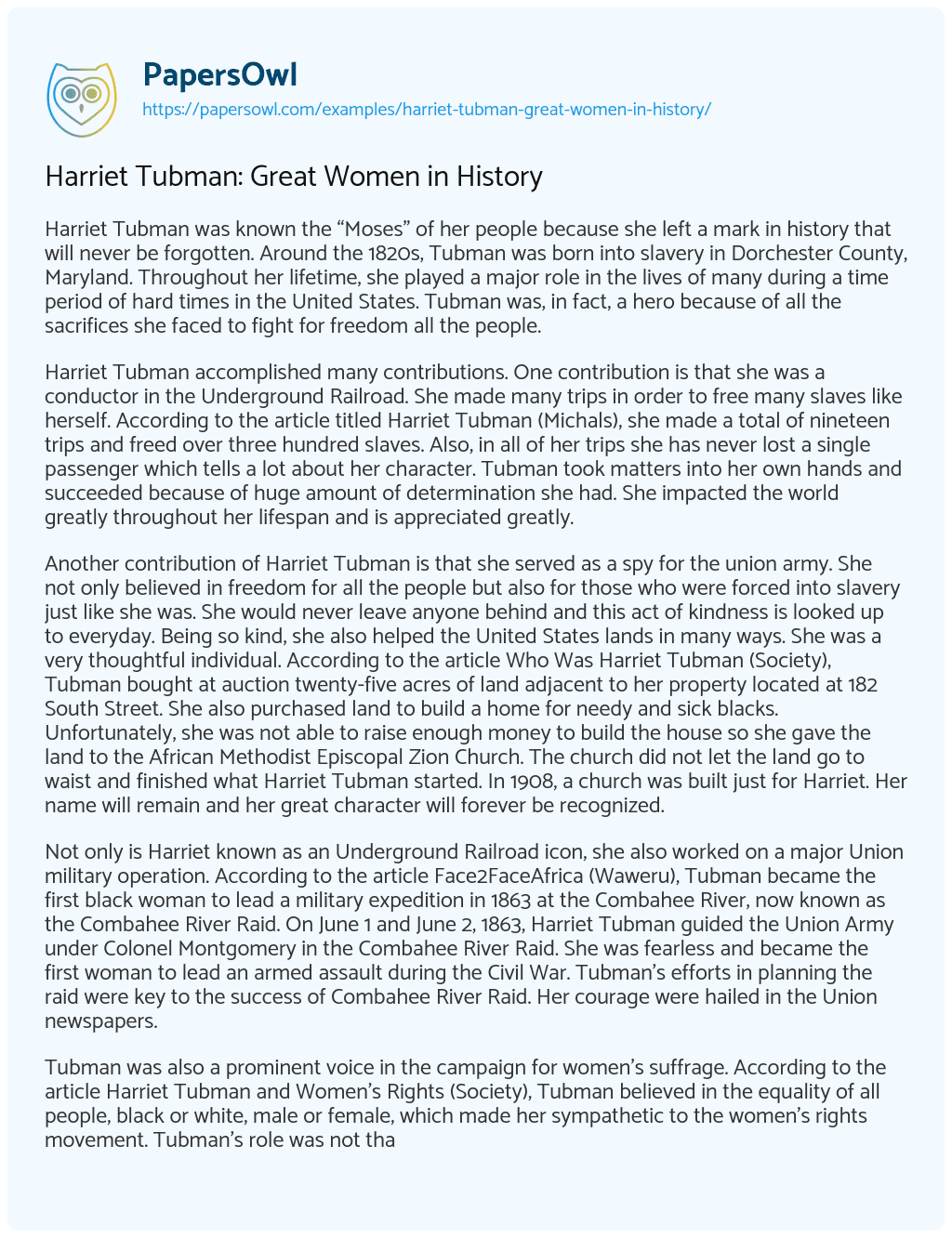 Harriet Tubman was known the “Moses” of her people because she left a mark in history that will never be forgotten. Around the 1820s, Tubman was born into slavery in Dorchester County, Maryland. Throughout her lifetime, she played a major role in the lives of many during a time period of hard times in the United States. Tubman was, in fact, a hero because of all the sacrifices she faced to fight for freedom all the people.

Harriet Tubman accomplished many contributions. One contribution is that she was a conductor in the Underground Railroad. She made many trips in order to free many slaves like herself. According to the article titled Harriet Tubman (Michals), she made a total of nineteen trips and freed over three hundred slaves. Also, in all of her trips she has never lost a single passenger which tells a lot about her character. Tubman took matters into her own hands and succeeded because of huge amount of determination she had. She impacted the world greatly throughout her lifespan and is appreciated greatly.

Another contribution of Harriet Tubman is that she served as a spy for the union army. She not only believed in freedom for all the people but also for those who were forced into slavery just like she was. She would never leave anyone behind and this act of kindness is looked up to everyday. Being so kind, she also helped the United States lands in many ways. She was a very thoughtful individual. According to the article Who Was Harriet Tubman (Society), Tubman bought at auction twenty-five acres of land adjacent to her property located at 182 South Street. She also purchased land to build a home for needy and sick blacks. Unfortunately, she was not able to raise enough money to build the house so she gave the land to the African Methodist Episcopal Zion Church. The church did not let the land go to waist and finished what Harriet Tubman started. In 1908, a church was built just for Harriet. Her name will remain and her great character will forever be recognized.

Tubman was also a prominent voice in the campaign for women’s suffrage. According to the article Harriet Tubman and Women’s Rights (Society), Tubman believed in the equality of all people, black or white, male or female, which made her sympathetic to the women’s rights movement. Tubman’s role was not that of a leader but that of a strong supporter. After the war, she continued to help blacks shape their new lives in freedom. In her later years, Tubman became a part of the women’s suffrage movement. Tubman gave many speeches in support of women’s right to vote. She made sure women had just as much equality as men.

Tubman was truly an icon. According to the article Harriet Tubman: An Icon of Christian Courage and Faith in Action (Register), she was also an African American icon and an inspiration for their struggle for equality. Harriet Tubman was widely known and well-respected during her lifetime. After her death in 1913, she became an icon for blacks and inspired generations of African Americans struggling for equality and civil rights. Since the African-American Civil Rights Movement, her contributions have been acknowledged. She was a very impactful person in her lifetime.

Harriet Tubman was a positive role model because of her accomplishments. According to the article African American Coins and Stamps (Admin), Harriet Tubman was the first African American to be honored as part of the Black Heritage Stamp Series. In 1978, the US Postal Service issued a stamp in honor of Tubman which made her the first African-American woman to be honored on a US Postage stamp. In 2013, US President Barack Obama signed a proclamation creating the Harriet Tubman Underground Railroad National Monument in the state of Maryland to commemorate her life and achievements. Like recently stated, her achievements were always recognized.

Harriet Tubman had an inspirational life during which she escaped from slavery and helped many others to do the same; took an active part in the American Civil War; and became a prominent speaker for women’s right to vote. She did all this even though odds were stacked against her as she was black and a woman. Due to her tremendous achievements, Harriet Tubman is today an icon of American courage and freedom. In 2002, scholar Molefi Kete Asante included Harriet Tubman on his list of the 100 Greatest African Americans. In 2016, the U.S. Treasury Department announced a plan for Tubman to replace Andrew Jackson as the portrait gracing the $20 bill. She inspires people everyday because of her amazing achievements.

Harriet was a caregiver her entire life but before that, she was a Civil War nurse. Since there were not many nurses Harriet Tubman probably cared for most of them. The risk she was not as high as her other achievements, the risk was at a medium rate because she was in a war zone and could have caught a disease or been killed by enemy fire. Harriet Tubman didn’t give up being a nurse, she was devoted and stayed a nurse all four years of the war. After the war ended Tubman still continued helping people in need. From the end of the Civil War to the end of her life. All forty-eight years of the rest of her life, Harriet Tubman helped people in need. She would help six to eight people at a time and some people would stay longer than others, so there isn’t much evidence on how many people she helped exactly. The risk she was in was the lowest of all her achievements, her risk was very low. The reason for it being low is that the only danger she was in was catching a disease. Although being a Civil War nurse and a caregiver isn’t her greatest achievement, it’s a very thoughtful achievement because she wasn’t asked to do what she did. She did it because she thought it was the right thing to do.

Harriet Tubman is one of the most honored heroes in the United States of America. Many people look up to her and thank her very much for her accomplishments and her kindness. She was the most courageous slave there was because she risked her life for many other people. She is an inspiration to many African Americans in so many ways. She did the impossible by leading slaves to freedom without getting caught. She is a role model to others and makes them feel good about themselves. She is, in fact, the greatest of all times.