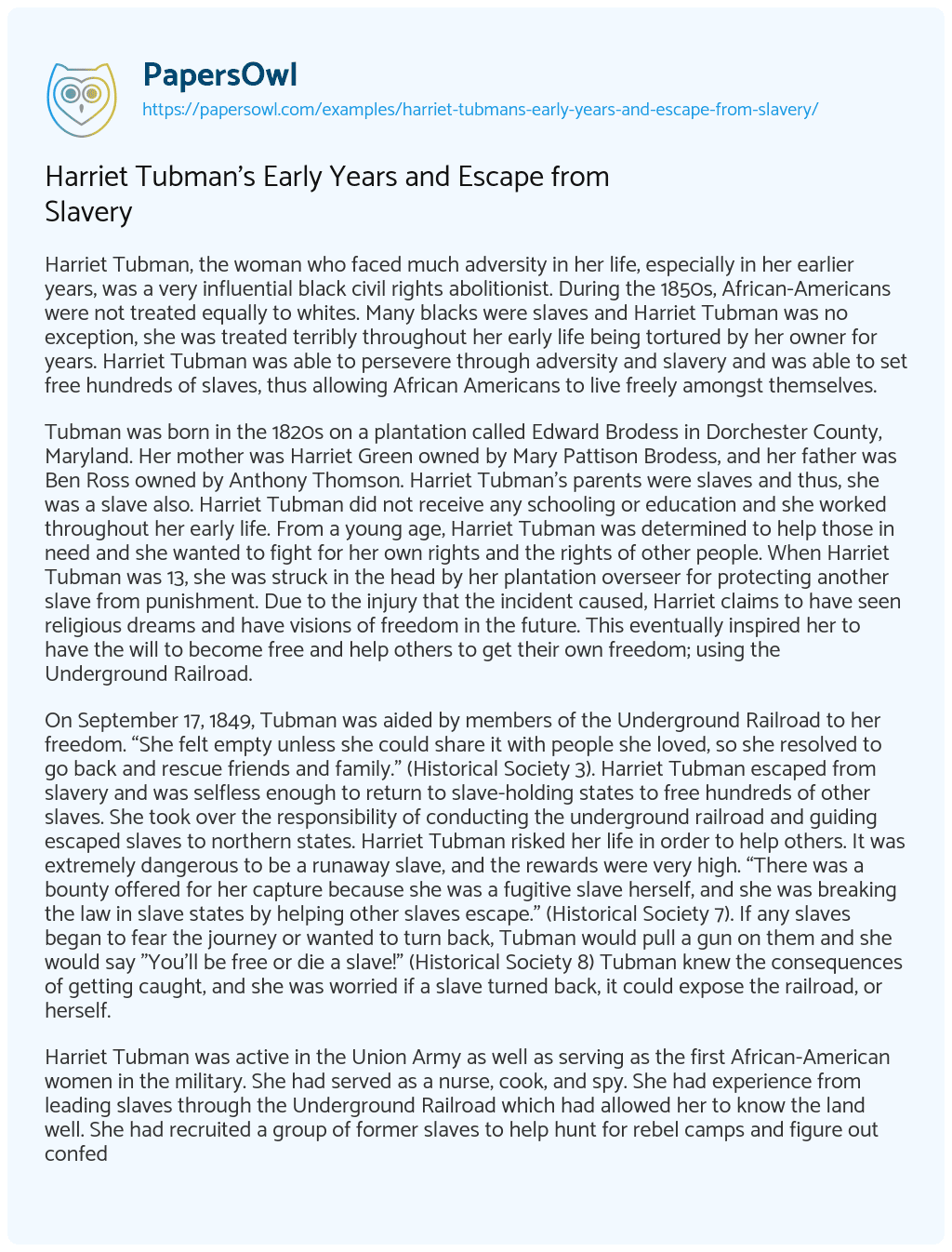 Harriet Tubman, the woman who faced much adversity in her life, especially in her earlier years, was a very influential black civil rights abolitionist. During the 1850s, African-Americans were not treated equally to whites. Many blacks were slaves and Harriet Tubman was no exception, she was treated terribly throughout her early life being tortured by her owner for years. Harriet Tubman was able to persevere through adversity and slavery and was able to set free hundreds of slaves, thus allowing African Americans to live freely amongst themselves.

Tubman was born in the 1820s on a plantation called Edward Brodess in Dorchester County, Maryland. Her mother was Harriet Green owned by Mary Pattison Brodess, and her father was Ben Ross owned by Anthony Thomson. Harriet Tubman’s parents were slaves and thus, she was a slave also. Harriet Tubman did not receive any schooling or education and she worked throughout her early life. From a young age, Harriet Tubman was determined to help those in need and she wanted to fight for her own rights and the rights of other people. When Harriet Tubman was 13, she was struck in the head by her plantation overseer for protecting another slave from punishment. Due to the injury that the incident caused, Harriet claims to have seen religious dreams and have visions of freedom in the future. This eventually inspired her to have the will to become free and help others to get their own freedom; using the Underground Railroad.

On September 17, 1849, Tubman was aided by members of the Underground Railroad to her freedom. “She felt empty unless she could share it with people she loved, so she resolved to go back and rescue friends and family.” (Historical Society 3). Harriet Tubman escaped from slavery and was selfless enough to return to slave-holding states to free hundreds of other slaves. She took over the responsibility of conducting the underground railroad and guiding escaped slaves to northern states. Harriet Tubman risked her life in order to help others. It was extremely dangerous to be a runaway slave, and the rewards were very high. “There was a bounty offered for her capture because she was a fugitive slave herself, and she was breaking the law in slave states by helping other slaves escape.” (Historical Society 7). If any slaves began to fear the journey or wanted to turn back, Tubman would pull a gun on them and she would say “You’ll be free or die a slave!” (Historical Society 8) Tubman knew the consequences of getting caught, and she was worried if a slave turned back, it could expose the railroad, or herself.

Harriet Tubman was active in the Union Army as well as serving as the first African-American women in the military. She had served as a nurse, cook, and spy. She had experience from leading slaves through the Underground Railroad which had allowed her to know the land well. She had recruited a group of former slaves to help hunt for rebel camps and figure out confederate troops next move. “On June 1 and June 2, 1863, Harriet Tubman guided the Union Army under Colonel Montgomery in the Combahee River Raid. She thus became the first woman to lead an armed assault during the Civil War. The Union troops set fire to the plantations, destroying infrastructure and seizing thousands of dollars worth of food and supplies. More than 750 slaves were liberated in the raid and most of these men went on to join the Union Army. Tubman’s efforts in planning the raid and the intelligence she provided were key to the success of Combahee River Raid. Her courage and patriotism were hailed in the Union newspapers.” (Newtonic 5). During Tubman’s career in the Union’s Army, she had managed to free over 750 slaves. Furthermore, she had gained the title of the first woman to lead an armed assault in the civil war. This is significant due to Tubman tackling the challenges of slavery by being apart of the Union army which allowed herself to help assist in the battle to end slavery. As a result, many slaves were freed.

In Tubman’s later years, she had purchased 25 acres worth of land with multiple homes. She established the Tubman Home for Aged and Indigent Negroes with the intentions of caring for old and poor citizens of her community. “At the age of 74, Tubman purchased at auction a 25-acre parcel of land with numerous structures which abutted her residential property. Her hope was to establish the Tubman Home for Aged and Indigent Negroes to carry on her work, after she was gone, of caring for the old and poor in her community. When she was unable to raise funds necessary to open the facility, Tubman deeded the property to the African Methodist Episcopal Zion Church in exchange for their opening and operating the Tubman Home for Aged and Indigent Negroes. The facility operated from 1908 until the early 1920s. Tubman herself became a patient, staying in a structure on the property called John Brown Hall which was used as the infirmary and main dormitory, until her death in 1913.” (U.S. National Park Service 3) Tubman was very involved with helping African-Americans in her community. She had opened the Home for Aged and Indigent Negroes to help serve the elderly in her community, however, she could not raise enough funds. As a result, she deeded the property the African Methodist Episcopal Zion Church to operate the home. Tubman would later be a patient of the same home, which operated for five years until her death in 1931 in her early nineties. Tubman’s home allowed her to help other African-Americans who were in difficult situations even after the end of the civil war. This shows that she was truly caring for the difficulties of slavery, even after its abolishment.

Harriet Tubman persevered through the challenges of slavery due to her help with liberating hundreds of slaves and helping African-Americans live in freedom. This can be apparent throughout her life that she truly cared for the wellbeing of African-Americans. This is apparent due to the several trips she had made to help guide slaves through the underground railroad. Furthermore, she had served in the Union Army which allowed her to liberate hundreds, gather intel on the Confederacy, and assist soldiers with food and medical aid. In her later years, Tubman opened the Tubman Home for Aged and Indigent Negroes to further help African-Americans who were struggling. To conclude, Harriet Tubman tackled the hardships of slavery leading to the liberation of hundreds of indentured slaves and allowing African-Americans to live in freedom. The best way to remember important historical figures such as Tubman, is to learn their stories and bring awareness to the topic so that they will not be forgotten.