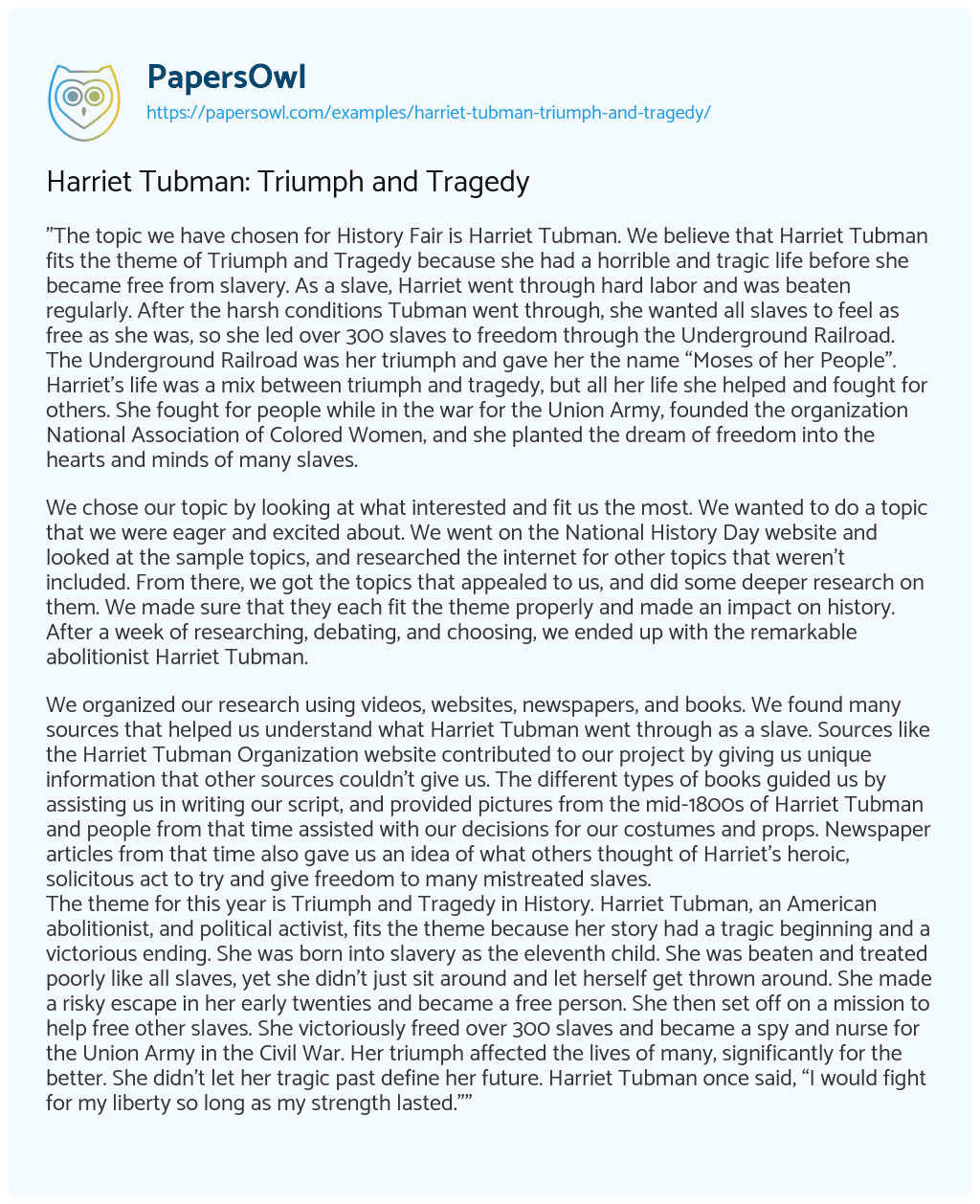 “The topic we have chosen for History Fair is Harriet Tubman. We believe that Harriet Tubman fits the theme of Triumph and Tragedy because she had a horrible and tragic life before she became free from slavery. As a slave, Harriet went through hard labor and was beaten regularly. After the harsh conditions Tubman went through, she wanted all slaves to feel as free as she was, so she led over 300 slaves to freedom through the Underground Railroad. The Underground Railroad was her triumph and gave her the name “Moses of her People”. Harriet’s life was a mix between triumph and tragedy, but all her life she helped and fought for others. She fought for people while in the war for the Union Army, founded the organization National Association of Colored Women, and she planted the dream of freedom into the hearts and minds of many slaves.

We chose our topic by looking at what interested and fit us the most. We wanted to do a topic that we were eager and excited about. We went on the National History Day website and looked at the sample topics, and researched the internet for other topics that weren’t included. From there, we got the topics that appealed to us, and did some deeper research on them. We made sure that they each fit the theme properly and made an impact on history. After a week of researching, debating, and choosing, we ended up with the remarkable abolitionist Harriet Tubman.

We organized our research using videos, websites, newspapers, and books. We found many sources that helped us understand what Harriet Tubman went through as a slave. Sources like the Harriet Tubman Organization website contributed to our project by giving us unique information that other sources couldn’t give us. The different types of books guided us by assisting us in writing our script, and provided pictures from the mid-1800s of Harriet Tubman and people from that time assisted with our decisions for our costumes and props. Newspaper articles from that time also gave us an idea of what others thought of Harriet’s heroic, solicitous act to try and give freedom to many mistreated slaves.
The theme for this year is Triumph and Tragedy in History. Harriet Tubman, an American abolitionist, and political activist, fits the theme because her story had a tragic beginning and a victorious ending. She was born into slavery as the eleventh child. She was beaten and treated poorly like all slaves, yet she didn’t just sit around and let herself get thrown around. She made a risky escape in her early twenties and became a free person. She then set off on a mission to help free other slaves. She victoriously freed over 300 slaves and became a spy and nurse for the Union Army in the Civil War. Her triumph affected the lives of many, significantly for the better. She didn’t let her tragic past define her future. Harriet Tubman once said, “I would fight for my liberty so long as my strength lasted.””