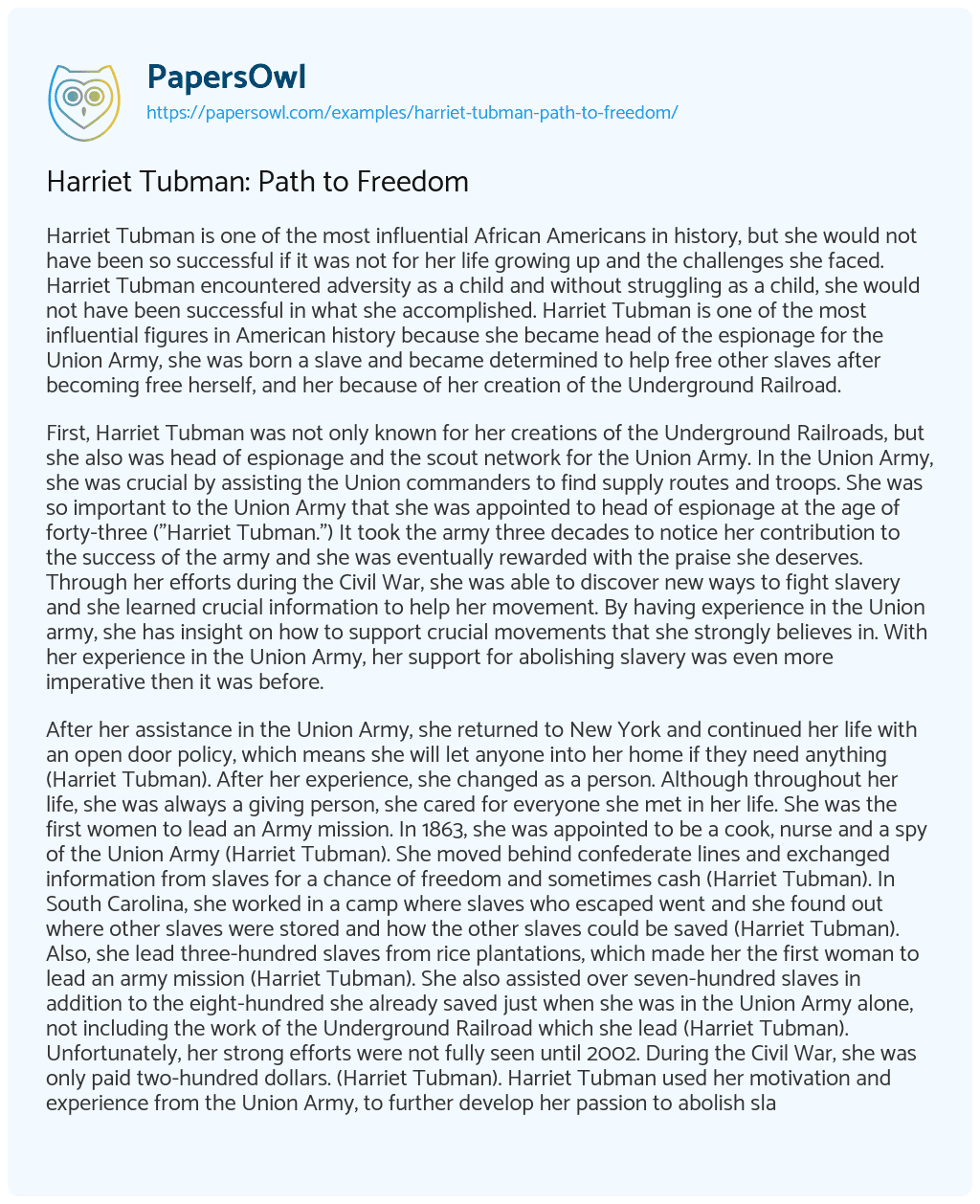 Harriet Tubman is one of the most influential African Americans in history, but she would not have been so successful if it was not for her life growing up and the challenges she faced. Harriet Tubman encountered adversity as a child and without struggling as a child, she would not have been successful in what she accomplished. Harriet Tubman is one of the most influential figures in American history because she became head of the espionage for the Union Army, she was born a slave and became determined to help free other slaves after becoming free herself, and her because of her creation of the Underground Railroad.

First, Harriet Tubman was not only known for her creations of the Underground Railroads, but she also was head of espionage and the scout network for the Union Army. In the Union Army, she was crucial by assisting the Union commanders to find supply routes and troops. She was so important to the Union Army that she was appointed to head of espionage at the age of forty-three (“Harriet Tubman.”) It took the army three decades to notice her contribution to the success of the army and she was eventually rewarded with the praise she deserves. Through her efforts during the Civil War, she was able to discover new ways to fight slavery and she learned crucial information to help her movement. By having experience in the Union army, she has insight on how to support crucial movements that she strongly believes in. With her experience in the Union Army, her support for abolishing slavery was even more imperative then it was before.

After her assistance in the Union Army, she returned to New York and continued her life with an open door policy, which means she will let anyone into her home if they need anything (Harriet Tubman). After her experience, she changed as a person. Although throughout her life, she was always a giving person, she cared for everyone she met in her life. She was the first women to lead an Army mission. In 1863, she was appointed to be a cook, nurse and a spy of the Union Army (Harriet Tubman). She moved behind confederate lines and exchanged information from slaves for a chance of freedom and sometimes cash (Harriet Tubman). In South Carolina, she worked in a camp where slaves who escaped went and she found out where other slaves were stored and how the other slaves could be saved (Harriet Tubman). Also, she lead three-hundred slaves from rice plantations, which made her the first woman to lead an army mission (Harriet Tubman). She also assisted over seven-hundred slaves in addition to the eight-hundred she already saved just when she was in the Union Army alone, not including the work of the Underground Railroad which she lead (Harriet Tubman). Unfortunately, her strong efforts were not fully seen until 2002. During the Civil War, she was only paid two-hundred dollars. (Harriet Tubman). Harriet Tubman used her motivation and experience from the Union Army, to further develop her passion to abolish slavery.

Harriet Tubman grew up as a slave. She was one of many who grew up in slavery. She grew up with eight brothers and sisters but they were unfortunately separated because they were enslaved and sold to separate families (Harriet Tubman). Even at the age of five, Harriet was a nursemaid and was harshly abused which left her emotionally and physically scared for the rest of her life (Michals, Debra). She grew up knowing slavery as the norm and she knew nothing else, so she was so moved to help free the other slaves. Harriet Tubman and her family were separated when she was seven years old, so the children were very young, so they did not have a strong relationship. She had stated that she prefered plantation work inside of indoor laboring chores. Harriet Tubman was heavily influenced to change the lives of slaves because she can relate to them since she was a slave. She was able to escape slavery, but when she was enslaved, she was treated brutally. Harriet Tubman was treated poorly during her childhood and she used her frustration of being a slave to help her make drastic changes in freeing slaves. Whenever someone hears Harriet Tubman, one immediately thinks of freeing innocent slaves. She was a very influential person in history, and because of her efforts to abolish slavery, she is the most influential women in history. She used her personal experience of being a slave in the past to motivate her movement of freeing slaves. She created the Underground Railroad which freed an immense number of slaves to safety. Slaves were treated brutally and were not treated as a person in society. Her family was also enslaved and some members of her family were separated so she did not know her entire family. Her motivation to free slaves started when she was twelve years old, and she witnessed a slave owner throw a heavy rock at another slave (Harriet Tubman). Seeing such a horrific act caused her passion to free slaves. The slave who was attacked by her slave owner later stated, “The weight broke my skull… They carried me to the house all bleeding and fainting. I had no bed, no place to lie down on at all, and they laid me on the seat of the loom, and I stayed there all day until the next” (Harriet Tubman). This former slave expressing her extreme experiences really depicts how it was to be a slave. Since she was born a slave, she could easily connect her personal experience so no one else had to experience the torture of slaves. Since Harriet Tubman was a slave, she decided to help free the slaves through a railroad that she made underground. She used her past experiences to drive her in freeing other slaves still enslaved. She was an advocate to freedom of slavery and from successfully escaping slavery herself, then she returned to help others who were enslaved with her extreme passion for abolishing slavery.

In conclusion, Harriet Tubman is by far the most influential women in history, but she could not have been this successful without her prior experiences in her life. By her creating the crucial Underground Railroad, escaping slavery herself and being an imperative person in the Union Army, she was successful in everything she pursued and was passionate about.