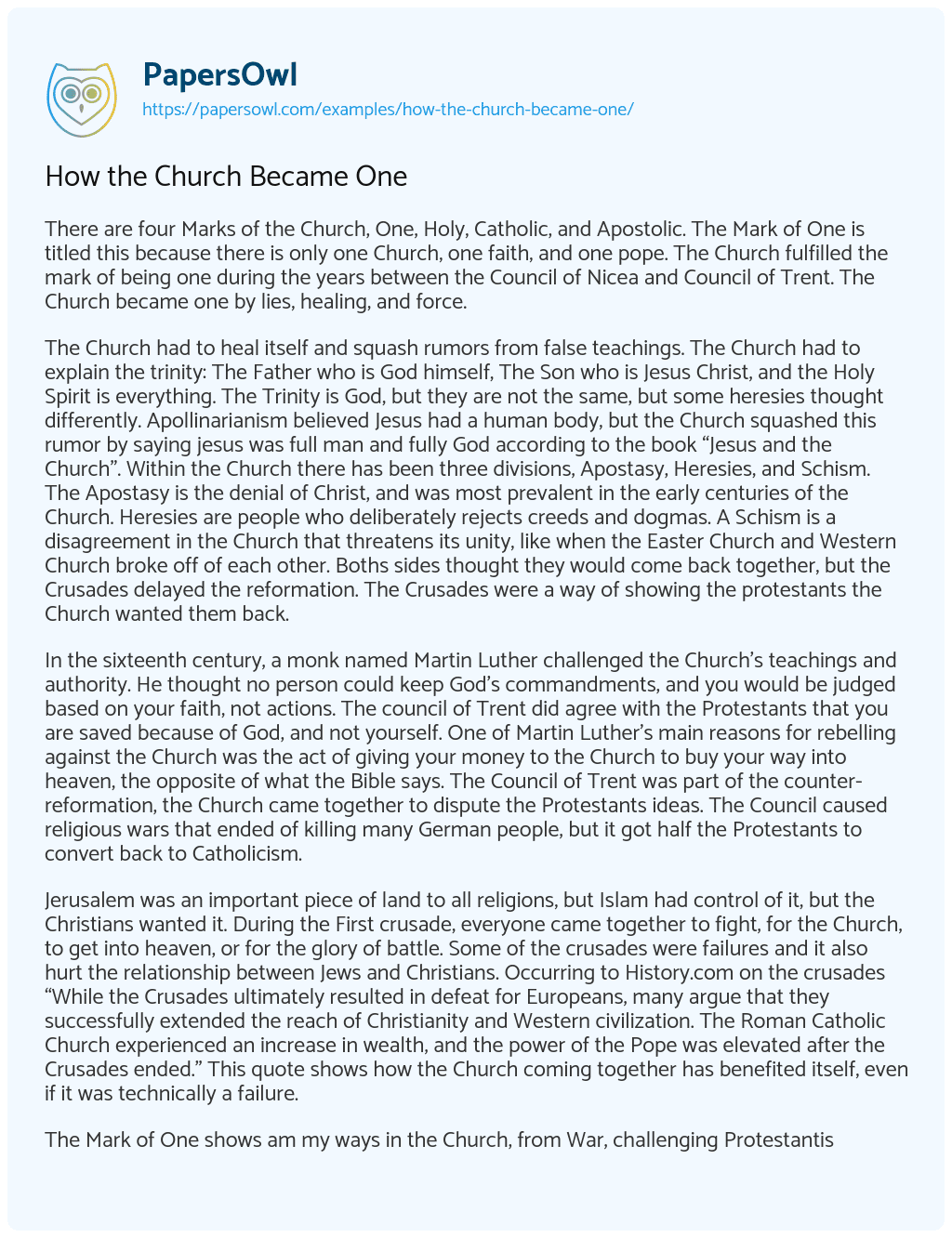 There are four Marks of the Church, One, Holy, Catholic, and Apostolic. The Mark of One is titled this because there is only one Church, one faith, and one pope. The Church fulfilled the mark of being one during the years between the Council of Nicea and Council of Trent. The Church became one by lies, healing, and force.

The Church had to heal itself and squash rumors from false teachings. The Church had to explain the trinity: The Father who is God himself, The Son who is Jesus Christ, and the Holy Spirit is everything. The Trinity is God, but they are not the same, but some heresies thought differently. Apollinarianism believed Jesus had a human body, but the Church squashed this rumor by saying jesus was full man and fully God according to the book “Jesus and the Church”. Within the Church there has been three divisions, Apostasy, Heresies, and Schism. The Apostasy is the denial of Christ, and was most prevalent in the early centuries of the Church. Heresies are people who deliberately rejects creeds and dogmas. A Schism is a disagreement in the Church that threatens its unity, like when the Easter Church and Western Church broke off of each other. Boths sides thought they would come back together, but the Crusades delayed the reformation. The Crusades were a way of showing the protestants the Church wanted them back.

In the sixteenth century, a monk named Martin Luther challenged the Church’s teachings and authority. He thought no person could keep God’s commandments, and you would be judged based on your faith, not actions. The council of Trent did agree with the Protestants that you are saved because of God, and not yourself. One of Martin Luther’s main reasons for rebelling against the Church was the act of giving your money to the Church to buy your way into heaven, the opposite of what the Bible says. The Council of Trent was part of the counter-reformation, the Church came together to dispute the Protestants ideas. The Council caused religious wars that ended of killing many German people, but it got half the Protestants to convert back to Catholicism.

Jerusalem was an important piece of land to all religions, but Islam had control of it, but the Christians wanted it. During the First crusade, everyone came together to fight, for the Church, to get into heaven, or for the glory of battle. Some of the crusades were failures and it also hurt the relationship between Jews and Christians. Occurring to History.com on the crusades “While the Crusades ultimately resulted in defeat for Europeans, many argue that they successfully extended the reach of Christianity and Western civilization. The Roman Catholic Church experienced an increase in wealth, and the power of the Pope was elevated after the Crusades ended.” This quote shows how the Church coming together has benefited itself, even if it was technically a failure.

The Mark of One shows am my ways in the Church, from War, challenging Protestantism, to squashing rumors.

How the Church Became One. (2020, Jul 23). Retrieved from https://papersowl.com/examples/how-the-church-became-one/