Brujeria and Catholicism Interview with a Bruja 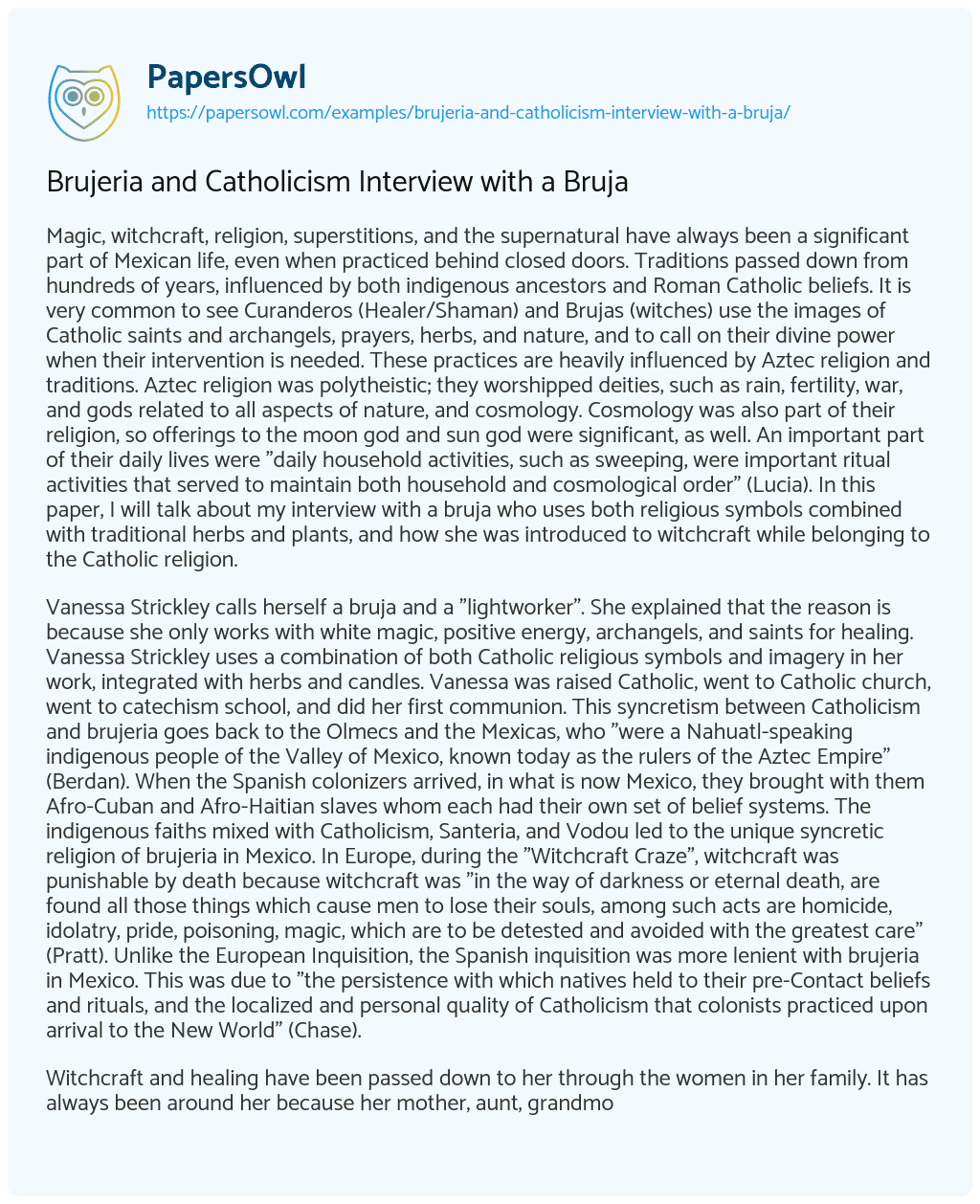 Magic, witchcraft, religion, superstitions, and the supernatural have always been a significant part of Mexican life, even when practiced behind closed doors. Traditions passed down from hundreds of years, influenced by both indigenous ancestors and Roman Catholic beliefs. It is very common to see Curanderos (Healer/Shaman) and Brujas (witches) use the images of Catholic saints and archangels, prayers, herbs, and nature, and to call on their divine power when their intervention is needed. These practices are heavily influenced by Aztec religion and traditions. Aztec religion was polytheistic; they worshipped deities, such as rain, fertility, war, and gods related to all aspects of nature, and cosmology. Cosmology was also part of their religion, so offerings to the moon god and sun god were significant, as well. An important part of their daily lives were “daily household activities, such as sweeping, were important ritual activities that served to maintain both household and cosmological order” (Lucia). In this paper, I will talk about my interview with a bruja who uses both religious symbols combined with traditional herbs and plants, and how she was introduced to witchcraft while belonging to the Catholic religion.

Vanessa Strickley calls herself a bruja and a “lightworker”. She explained that the reason is because she only works with white magic, positive energy, archangels, and saints for healing. Vanessa Strickley uses a combination of both Catholic religious symbols and imagery in her work, integrated with herbs and candles. Vanessa was raised Catholic, went to Catholic church, went to catechism school, and did her first communion. This syncretism between Catholicism and brujeria goes back to the Olmecs and the Mexicas, who “were a Nahuatl-speaking indigenous people of the Valley of Mexico, known today as the rulers of the Aztec Empire” (Berdan). When the Spanish colonizers arrived, in what is now Mexico, they brought with them Afro-Cuban and Afro-Haitian slaves whom each had their own set of belief systems. The indigenous faiths mixed with Catholicism, Santeria, and Vodou led to the unique syncretic religion of brujeria in Mexico. In Europe, during the “Witchcraft Craze”, witchcraft was punishable by death because witchcraft was “in the way of darkness or eternal death, are found all those things which cause men to lose their souls, among such acts are homicide, idolatry, pride, poisoning, magic, which are to be detested and avoided with the greatest care” (Pratt). Unlike the European Inquisition, the Spanish inquisition was more lenient with brujeria in Mexico. This was due to “the persistence with which natives held to their pre-Contact beliefs and rituals, and the localized and personal quality of Catholicism that colonists practiced upon arrival to the New World” (Chase).

Witchcraft and healing have been passed down to her through the women in her family. It has always been around her because her mother, aunt, grandmother and great-grandmother have practiced spell work and healing traditions, such as, wrapping a root with a leaf and a cotton ball, which they then placed inside her ear. Her mother’s maternal great-grandmother belonged to a Wiccan Coven in Santa Maria, California. Her mother’s paternal grandmother also practiced brujeria in Sinaloa, Mexico. Vanessa’s mother practiced brujeria around her but did not begin teaching her until she reached adulthood. She explained that her mother did not feel comfortable teaching her at a young age, but she was so drawn to it she had to go out on her own to learn. She was thirteen when she fully began to understand brujeria. She went to libraries and did research, read books, and learned as much as she could about occults and clairvoyance on her own. She added that, she feels that she knows what to do because it comes naturally to her. Over the years, she has become aware of her own power and intuition.

Vanessa’s family do no associate brujeria with evil, these customs are seen as normal in their everyday life and they are a part of her family home remedies and healing rituals. This belief, she explains, comes from ancient times where divination, magic, and shamanism were the only beliefs that existed with the indigenous people of ancient Mexico. To the colonizers who came to convert the indigenous people to Christianity, witchcraft was considered evil and belonged to the Devil. The occult did “not exist in the pre-Hispanic period because the notion of “evil” did not exist until the Europeans arrived” (L??pez-Austin). She believes that there is a thin line between Catholicism and brujeria. She explains that “as a Catholic, you pray to saints, you ask for their protection, their guidance, and you honor them with promises and offerings. This is quite similar to the Aztec’s worshipping deities and making sacrifices” (Strickley). She did acknowledge that there is a side of her family that are devout Catholics and have stopped speaking to her and her mother because they see what Vanessa and her mother do as “evil”. She feels that people that do not agree with her craft are just uneducated and she must ignore the negativity that they put out onto her.

Many of her clients come to her for healing, protection, cleansing rituals, and Tarot card readings. She refuses to work with Black Magic because it is used to cause harm unto others by invoking evil spirits for evil purposes. She believes that everything you do comes back to you, so she will turn clients away for this reason. She “stays away from hexes, I won’t put curses, but I will do spells to have someone leave them alone. If somebody’s safety is at risk, I will get involved (Strickley). For this type of “work”, she uses an Archangel Michael candle, herbs, and will anoint the person that needs the protection with oil. She then has her client pray to the image of Archangel Michael and have them light the candle. When asked why she uses Archangel Michael, she explained that he cuts the cord between them and that person and “Archangel Michael can cut the ties and he deals with evil humans and evil entities” (Strickley). When performing a protection spell, her ritual will consist of that “specific need that coincides with that specific Angel” (Strickley), and she will acknowledge him in her work. The Archangels have different specialties. For example, Archangel Raphael is the angel whose name means “God Heals”, so she acknowledges him in healing rituals. Archangel Gabriel’s name means “Strength from God”, and Michael is “He Who Is Like God” and will protect you, your family, and your home. Vanessa feels that she has a close relationship with both Archangels Michael and Raphael. She specified that she “has angels around me all the time. Angels are beings of light” (Strickley). Vanessa stated that she also has clairvoyance abilities, but she has not harnessed that ability because of her fear of the unknown. A person who is clairvoyant is able to see future events or is able to communicate with the dead. When asked if she has ever encountered something “dark” or “evil”, she recalls a woman that she met at an event she attended:

“I met a woman that was hurt while attending the same event I was. I took her home with me so that I could clean her wound. This woman proclaimed that she had sold her soul to the Devil. She kept saying over and over ‘I like dark, I like evil’. Before I knew it, her eyes changed, she got all weird, so I grabbed my holy water and soaked the towel I was using with it. As soon as I put the towel on her she started snarling and growling and yelling. So, I kicked her out. Right away I had to do a cleansing in my house with sage, I did salt blessings, and used candles. Light, the good, is much more stronger than evil and the dark”. (Strickley)

Her Catholic background has only affected her “social life with other witches” (Strickley). She has been told by other witches that she is not a witch because she believes in God. Vanessa clarified that other witches believe in energy and do not believe in god. They believe in the sun, the moon, the stars. She believes in God and the Light, and believes in vibrations, and that we’re all tide together. Every morning she says a prayer; she gives thanks to God, Jesus, angels, her spirit guide, and the sun and the moon. She also has daily affirmations, such as “I am in perfect health, and in divine relationship” (Strickley). She lives in the mountains near Lake Arrowhead, where she can practice freely and feel closer to nature. Vanessa feels that moving to the mountains has also given her a reawakening.

For Vanessa, it is important to do everything with love and light. She encourages to follow her practice by stating that “when you do what I do, it is almost like I am my own author, and that I have found my own way and freedom. I am so blessed. I set myself up that way. With witchcraft, prayer, and candle magic” (Strickley). She uses social media as a platform to share messages. “Angel cards, they have good messages attached to them. I like to spread the light; social media helps me do that” (Strickley). The message that she wants to make everyone to know is that Brujeria makes you have a self-awareness and in tuned with your higher self and in touch with what your soul wants and needs.

Brujeria and Catholicism Interview with a Bruja. (2019, Mar 04). Retrieved from https://papersowl.com/examples/brujeria-and-catholicism-interview-with-a-bruja/

Depictions of Deities Outside Catholicism

Catholicism Alongside Theatre in Ireland and England