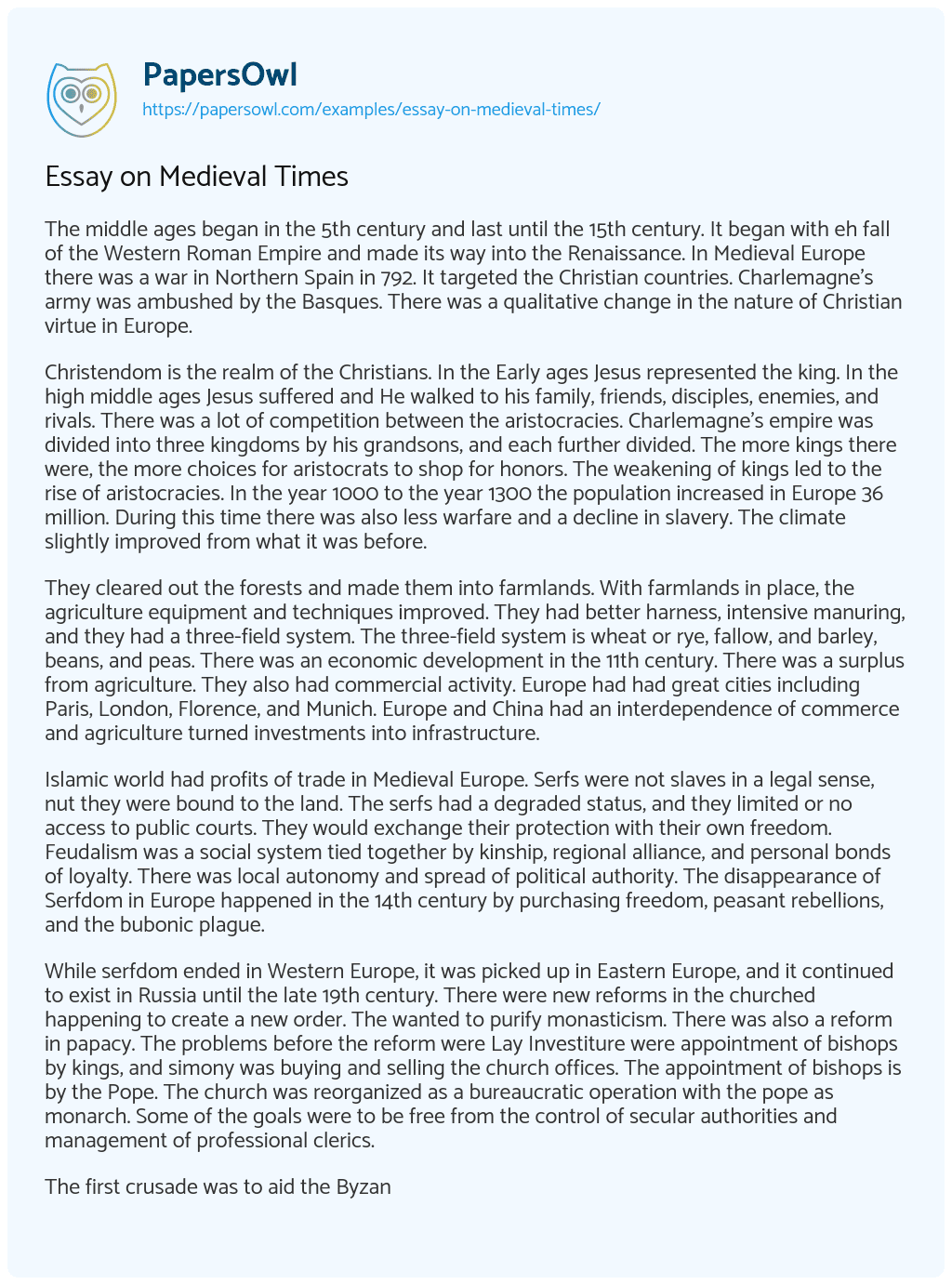 The middle ages began in the 5th century and last until the 15th century. It began with eh fall of the Western Roman Empire and made its way into the Renaissance. In Medieval Europe there was a war in Northern Spain in 792. It targeted the Christian countries. Charlemagne’s army was ambushed by the Basques. There was a qualitative change in the nature of Christian virtue in Europe.

Christendom is the realm of the Christians. In the Early ages Jesus represented the king. In the high middle ages Jesus suffered and He walked to his family, friends, disciples, enemies, and rivals. There was a lot of competition between the aristocracies. Charlemagne’s empire was divided into three kingdoms by his grandsons, and each further divided. The more kings there were, the more choices for aristocrats to shop for honors. The weakening of kings led to the rise of aristocracies. In the year 1000 to the year 1300 the population increased in Europe 36 million. During this time there was also less warfare and a decline in slavery. The climate slightly improved from what it was before.

They cleared out the forests and made them into farmlands. With farmlands in place, the agriculture equipment and techniques improved. They had better harness, intensive manuring, and they had a three-field system. The three-field system is wheat or rye, fallow, and barley, beans, and peas. There was an economic development in the 11th century. There was a surplus from agriculture. They also had commercial activity. Europe had had great cities including Paris, London, Florence, and Munich. Europe and China had an interdependence of commerce and agriculture turned investments into infrastructure.

Islamic world had profits of trade in Medieval Europe. Serfs were not slaves in a legal sense, nut they were bound to the land. The serfs had a degraded status, and they limited or no access to public courts. They would exchange their protection with their own freedom. Feudalism was a social system tied together by kinship, regional alliance, and personal bonds of loyalty. There was local autonomy and spread of political authority. The disappearance of Serfdom in Europe happened in the 14th century by purchasing freedom, peasant rebellions, and the bubonic plague.

While serfdom ended in Western Europe, it was picked up in Eastern Europe, and it continued to exist in Russia until the late 19th century. There were new reforms in the churched happening to create a new order. The wanted to purify monasticism. There was also a reform in papacy. The problems before the reform were Lay Investiture were appointment of bishops by kings, and simony was buying and selling the church offices. The appointment of bishops is by the Pope. The church was reorganized as a bureaucratic operation with the pope as monarch. Some of the goals were to be free from the control of secular authorities and management of professional clerics.

The first crusade was to aid the Byzantine Empire, and to regain the Holy Land in Jerusalem. The first crusade established a Latin kingdom in Palestine. The second crusade was defeated in 1148. The third crusade started in 1189 to 1192. This entailed drowning the German emperor and a peace treaty with Saladin. In the fourth crusade the pope contracted the Venetian merchants to ferry the troops, and there was competition between Venice and Constantinople during trade.

During this time, they attacked Constantinople, and there was mistrust between the Eastern and Western churches. The crusaders had some problem. The leaders argued amongst themselves, and doubts about the spiritual significance of such wars. The crusade also had significances which were showing the greed and piety of lords and outgrowth of Papal reform. “During the high Middle Ages, the Roman Catholic Church became organized into a hierarchy with the pope as the head of western Europe. He established supreme power. Many innovations took place in the creative arts during the high Middle Ages. Literacy was no longer merely requirement among the clergy. New readings were addressed to a newly literate public that had both the time and the knowledge to enjoy the work,” (James Sigona). During the medieval time period they had many achievements. These achievements were feudalism, cathedrals, and universities. They also had some negative effects which were, first pogroms against Jews, crusades against infidel Muslims, and conscious division of the world into Christians and non-Christians.

The relationship between the Church and the feudal states during the medieval period went through multiple developments. The struggles for power between kings and popes shaped the western world. The church became more defining of the Roman Empire. In the 5th century when the Roman Empire fell, there was no single powerful government in the West.

A Religious Perspective of the Medieval Period: an Odyssey