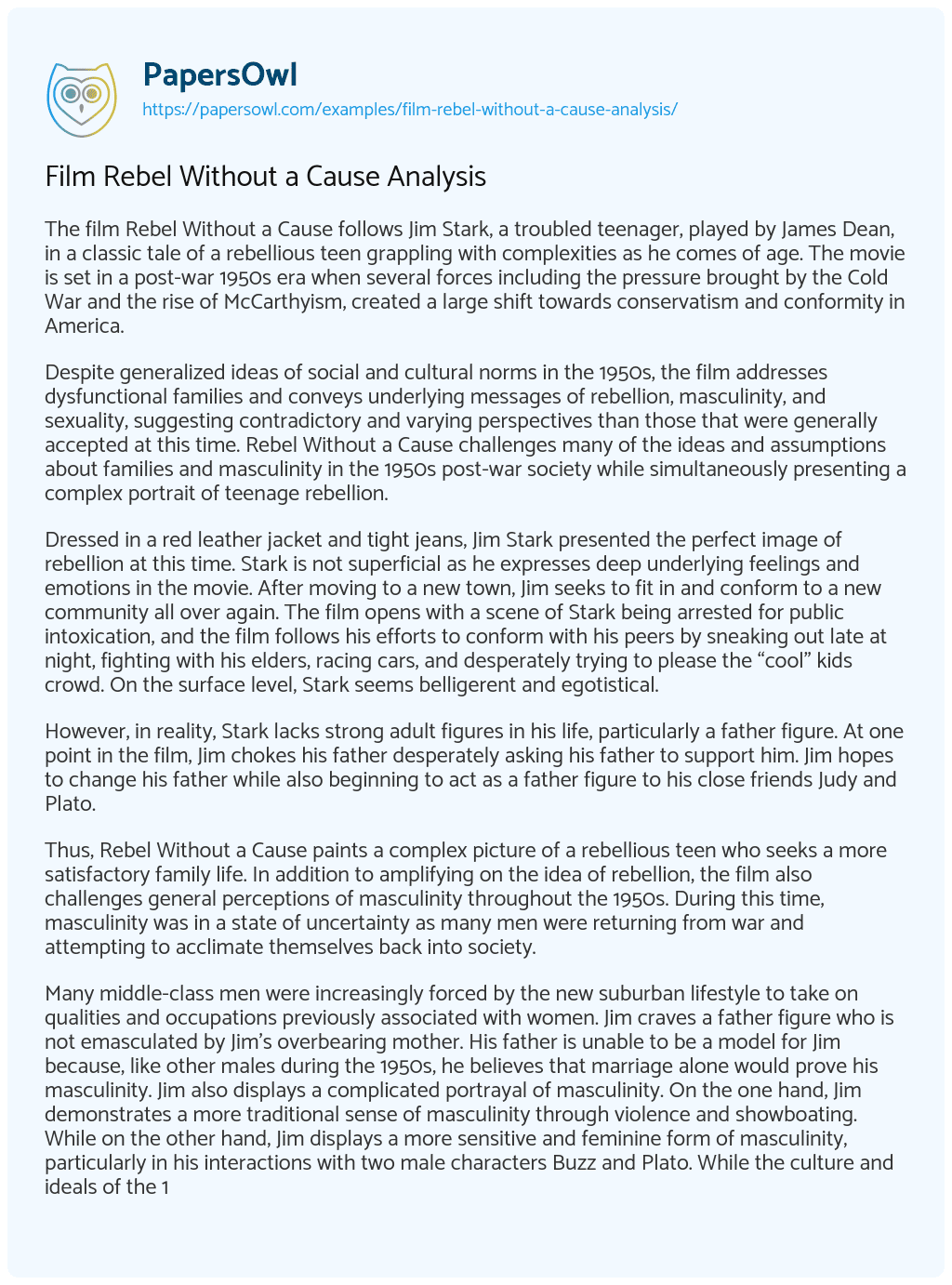 The film Rebel Without a Cause follows Jim Stark, a troubled teenager, played by James Dean, in a classic tale of a rebellious teen grappling with complexities as he comes of age. The movie is set in a post-war 1950s era when several forces including the pressure brought by the Cold War and the rise of McCarthyism, created a large shift towards conservatism and conformity in America.

Despite generalized ideas of social and cultural norms in the 1950s, the film addresses dysfunctional families and conveys underlying messages of rebellion, masculinity, and sexuality, suggesting contradictory and varying perspectives than those that were generally accepted at this time. Rebel Without a Cause challenges many of the ideas and assumptions about families and masculinity in the 1950s post-war society while simultaneously presenting a complex portrait of teenage rebellion.

Dressed in a red leather jacket and tight jeans, Jim Stark presented the perfect image of rebellion at this time. Stark is not superficial as he expresses deep underlying feelings and emotions in the movie. After moving to a new town, Jim seeks to fit in and conform to a new community all over again. The film opens with a scene of Stark being arrested for public intoxication, and the film follows his efforts to conform with his peers by sneaking out late at night, fighting with his elders, racing cars, and desperately trying to please the “cool” kids crowd. On the surface level, Stark seems belligerent and egotistical.

However, in reality, Stark lacks strong adult figures in his life, particularly a father figure. At one point in the film, Jim chokes his father desperately asking his father to support him. Jim hopes to change his father while also beginning to act as a father figure to his close friends Judy and Plato.

Thus, Rebel Without a Cause paints a complex picture of a rebellious teen who seeks a more satisfactory family life. In addition to amplifying on the idea of rebellion, the film also challenges general perceptions of masculinity throughout the 1950s. During this time, masculinity was in a state of uncertainty as many men were returning from war and attempting to acclimate themselves back into society.

Many middle-class men were increasingly forced by the new suburban lifestyle to take on qualities and occupations previously associated with women. Jim craves a father figure who is not emasculated by Jim’s overbearing mother. His father is unable to be a model for Jim because, like other males during the 1950s, he believes that marriage alone would prove his masculinity. Jim also displays a complicated portrayal of masculinity. On the one hand, Jim demonstrates a more traditional sense of masculinity through violence and showboating. While on the other hand, Jim displays a more sensitive and feminine form of masculinity, particularly in his interactions with two male characters Buzz and Plato. While the culture and ideals of the 1950s suggest that society at large was unaccepting of different images of masculinity and sexuality, Rebel Without a Cause challenges these ideals by displaying on-screen suggestions of homosexuality.

At this time, between Eisenhower’s Executive Order 10450 and the Lavender Scare, the general public was becoming increasingly aware of homosexuality. Alfred Kinsey’s book “Sexual Behavior of the Human Male” sold out immediately and captured attention for his claim that sexual behavior in America was more varied and common than most Americans were willing to believe. While homosexuality existed during this point in time, it was still considered a taboo.

Despite this, Rebel Without a Cause openly ponders and touches on homosexuality. For example, Jim’s friend Plato presents as a gay male. He appears to pine for Jim; he looks up to him, showers him with affection, stares adoringly at him and seeks to protect him. Even Buzz, the more typical representative of traditional masculinity, seems potentially prone to nontraditional sexual inclinations. The film suggests an underlying attraction between Jim and Buzz which is suppressed by their inherent need to prove their masculinity. The homosexual tensions are evident through the two characters’ shared cigarette.

After Jim lights a cigarette, Buzz takes it out of his mouth and places it in between his lips. Rather than reacting with anger, Jim smiles. The sexual tension appears to quickly subside, but it was nonetheless plainly present to a discerning viewer. While portraying a coming of age story, Rebel Without a Cause presents many progressive and contemporary ideas during the 1950s. Centered on Jim’s emotional exit from adolescence, he simultaneously depicts both a sons traditional need for an admirable father figure and the ways in which young men in the 1950s began to think differently about masculinity. Jim’s relationship with Plato and Buzz suggest that the American male could remain masculine while also accepting homosexuality.

By the end of the film, after having endured the deaths of Buzz and Plato, and having become a father figure to Plato, Jim appears prepared to reconcile with his father. The movie closes with Jim’s father affectionately placing a coat on Jim leading the viewer to hope that Jim’s evolving perception of masculinity allows him to accept his father notwithstanding the tensions in their relationship.

Film Rebel Without a Cause Analysis. (2021, Mar 26). Retrieved from https://papersowl.com/examples/film-rebel-without-a-cause-analysis/

Why do Teenagers Rebel against Parental Expectations