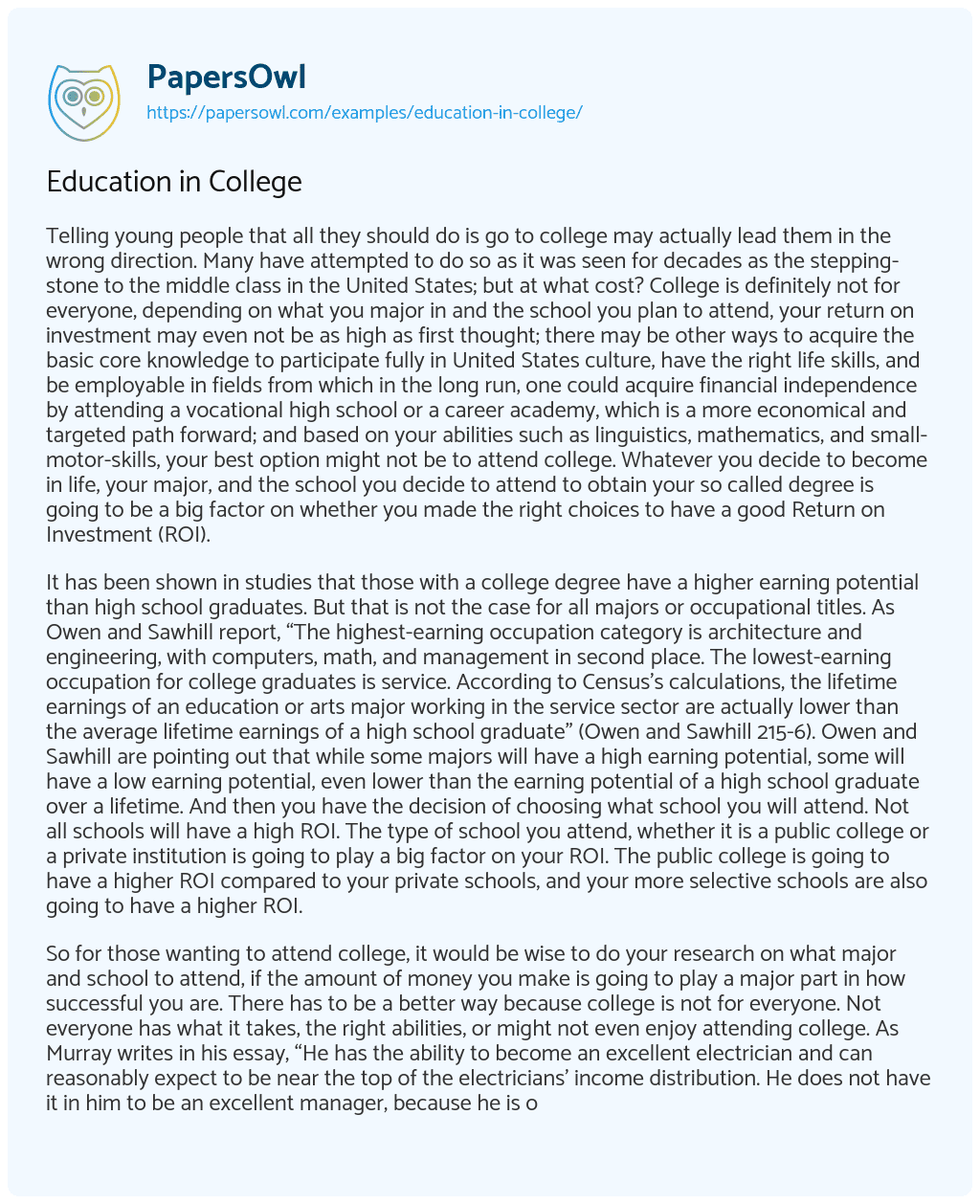 Telling young people that all they should do is go to college may actually lead them in the wrong direction. Many have attempted to do so as it was seen for decades as the stepping-stone to the middle class in the United States; but at what cost? College is definitely not for everyone, depending on what you major in and the school you plan to attend, your return on investment may even not be as high as first thought; there may be other ways to acquire the basic core knowledge to participate fully in United States culture, have the right life skills, and be employable in fields from which in the long run, one could acquire financial independence by attending a vocational high school or a career academy, which is a more economical and targeted path forward; and based on your abilities such as linguistics, mathematics, and small-motor-skills, your best option might not be to attend college. Whatever you decide to become in life, your major, and the school you decide to attend to obtain your so called degree is going to be a big factor on whether you made the right choices to have a good Return on Investment (ROI).

It has been shown in studies that those with a college degree have a higher earning potential than high school graduates. But that is not the case for all majors or occupational titles. As Owen and Sawhill report, “The highest-earning occupation category is architecture and engineering, with computers, math, and management in second place. The lowest-earning occupation for college graduates is service. According to Census’s calculations, the lifetime earnings of an education or arts major working in the service sector are actually lower than the average lifetime earnings of a high school graduate” (Owen and Sawhill 215-6). Owen and Sawhill are pointing out that while some majors will have a high earning potential, some will have a low earning potential, even lower than the earning potential of a high school graduate over a lifetime. And then you have the decision of choosing what school you will attend. Not all schools will have a high ROI. The type of school you attend, whether it is a public college or a private institution is going to play a big factor on your ROI. The public college is going to have a higher ROI compared to your private schools, and your more selective schools are also going to have a higher ROI.

So for those wanting to attend college, it would be wise to do your research on what major and school to attend, if the amount of money you make is going to play a major part in how successful you are. There has to be a better way because college is not for everyone. Not everyone has what it takes, the right abilities, or might not even enjoy attending college. As Murray writes in his essay, “He has the ability to become an excellent electrician and can reasonably expect to be near the top of the electricians’ income distribution. He does not have it in him to be an excellent manager, because he is only average in interpersonal and intrapersonal ability and only modestly above average in academic ability, all of which are important for becoming a good manager, while his competitors for those slots will include many who are high in all of those abilities” (Murray 246-7). What Murray is saying in this quote is that even though this person might obtain a college degree, they will not be in the top percentile; however, they do have the ability to be an excellent electrician, and thus they will probably make a higher income if they follow the electrician path. Maybe they are not cut out for all of the reading required to have a successful college education.

For someone in the top 98th percentile of their class maybe it’s a wise choice to attend college , but for the student who is not in that top percentile, who is better with their hands and is at the 95th percentile in small-motor skills, it is probably a wise choice to not go the college route. For a lot of students, when they are in middle school, they might have their minds set on an occupation that does not require a college education. Maybe they want to be a carpenter, a plumber, perhaps a chef, or maybe they just don’t like regular high school and are considering dropping out. If that is the path they would like to choose, then there is no need to go the college route. For that they can choose to go to a vocational school or career academy. As Owen and Sawhill point out, “For example, Career Academies are high schools organized around an occupational or industry focus, and have partnerships, with local employers and colleges.

They have been shown by gold standard research to increase men’s wages, hours worked , and employment stability after high school, particularly for those at high risk of dropping out” (Owen and Sawhill 222). Owen and Sawhill are showing us through their essay that for those who might drop out of school, there is the option of going to a vocational or career academy, who have been shown through research to increase these individuals employment stability. There is no need to drop out of high school. Find a career at one of these vocational or career academies that spikes your interest, and make that first step to a future good paying stable job. It is a good thing that we have these type of schools available for those considering to drop out of high school, as not everyone has the dream of going to college and these schools are a great alternative for those middle or high school students.

Should Everyone Attend College?

The Goal – Obtain a College Education