Importance of Volunteerism Among Students 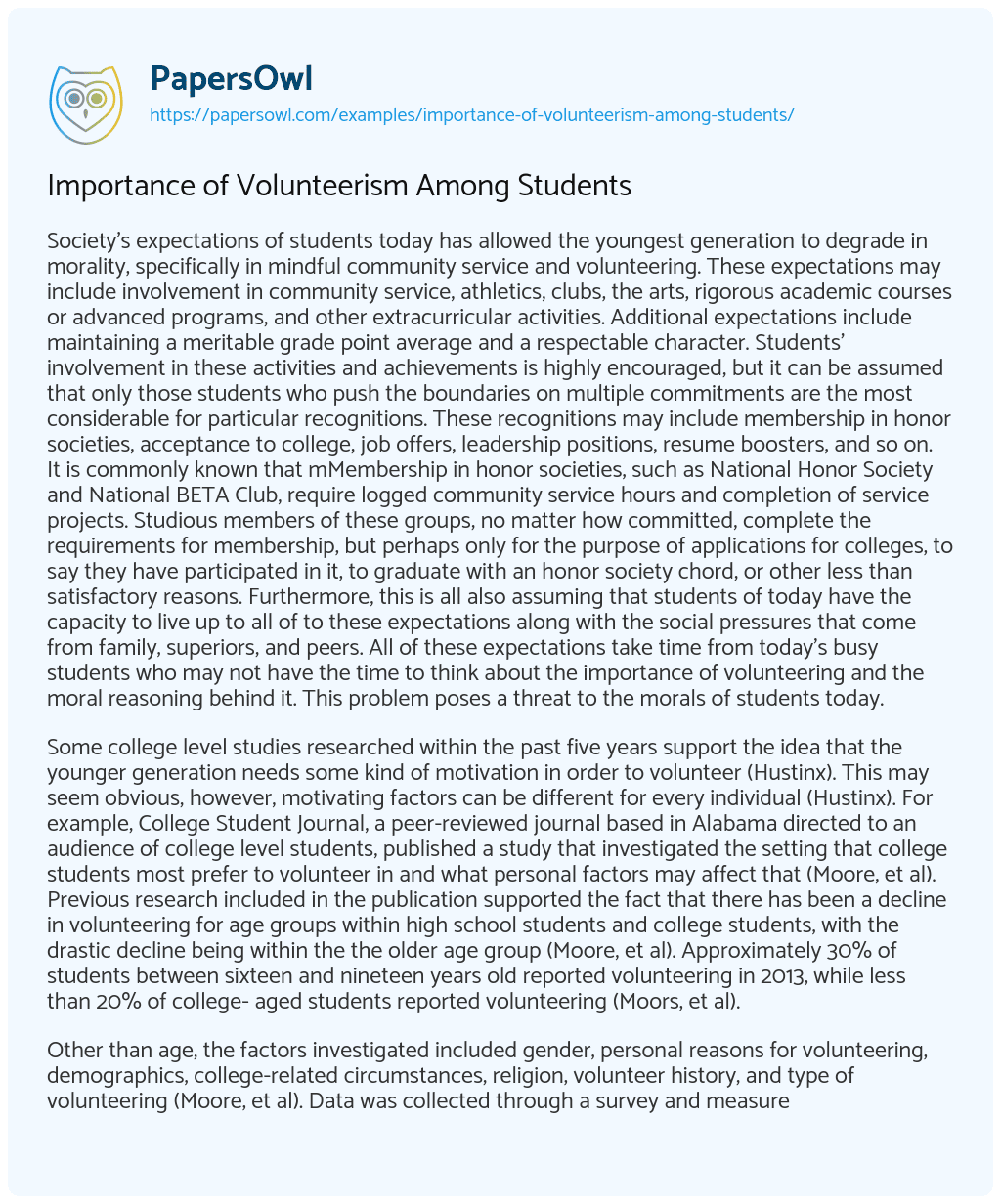 Society’s expectations of students today has allowed the youngest generation to degrade in morality, specifically in mindful community service and volunteering. These expectations may include involvement in community service, athletics, clubs, the arts, rigorous academic courses or advanced programs, and other extracurricular activities. Additional expectations include maintaining a meritable grade point average and a respectable character. Students’ involvement in these activities and achievements is highly encouraged, but it can be assumed that only those students who push the boundaries on multiple commitments are the most considerable for particular recognitions. These recognitions may include membership in honor societies, acceptance to college, job offers, leadership positions, resume boosters, and so on. It is commonly known that mMembership in honor societies, such as National Honor Society and National BETA Club, require logged community service hours and completion of service projects. Studious members of these groups, no matter how committed, complete the requirements for membership, but perhaps only for the purpose of applications for colleges, to say they have participated in it, to graduate with an honor society chord, or other less than satisfactory reasons. Furthermore, this is all also assuming that students of today have the capacity to live up to all of to these expectations along with the social pressures that come from family, superiors, and peers. All of these expectations take time from today’s busy students who may not have the time to think about the importance of volunteering and the moral reasoning behind it. This problem poses a threat to the morals of students today.

Some college level studies researched within the past five years support the idea that the younger generation needs some kind of motivation in order to volunteer (Hustinx). This may seem obvious, however, motivating factors can be different for every individual (Hustinx). For example, College Student Journal, a peer-reviewed journal based in Alabama directed to an audience of college level students, published a study that investigated the setting that college students most prefer to volunteer in and what personal factors may affect that (Moore, et al). Previous research included in the publication supported the fact that there has been a decline in volunteering for age groups within high school students and college students, with the drastic decline being within the the older age group (Moore, et al). Approximately 30% of students between sixteen and nineteen years old reported volunteering in 2013, while less than 20% of college- aged students reported volunteering (Moors, et al).

Volunteering and participation in community service is a tangible outlet that leads to the development of moral standards and denefitting knowledge that comes through experience (Moore, et al). It is not a person’s civic duty to take part in community service;, however, a citizen in touch with their understanding of civic responsibilities would understand the importance in doing so (Longo, et al). In an article published by the Association of American Colleges and Universities, two colleges, Providence College and Saint Mary’s College of California, outline programs and majors offered that encourage the development of “democratic citizens” and their effect on graduates in those programs and majors (Longo, et al). The program offered at Providence College, Public and Community Service Studies (PSP), specifically helps students build leadership skills and coursework requires at least 550 hours of service within the community (Longo, et al). Saint Mary’s College relatively newer program of study, Justice, Community, and Leadership Program (JCL), is similar to that of Providence College (Longo, et al). JCL also gives students the opportunity to be an active member of the community without compromising their higher education by engaging in the core values of the college and a liberal arts degree (Longo, et al). College students attending these schools who participate in these focused programs are able to spend an extensive amount of time in volunteering in the community (Longo, et al). Other colleges and universities should look towards Providence College and Saint Mary’s College of California as an example of the benefits of offering courses/majors/programs that integrate civic learning so that students are given the opportunity and choice to become better citizens.

Another survey-based research project published by College Student Journal concerned the creation of an experiment designed around testing Aristotle’s theory of deliberation (Lin, et al). Aristotle’s theory states that, “moral deliberation is supposed to find reasons, which may lead us to renounce spurious moral beliefs in pursuit of authentic goodness,” (Lin, et al). In terms of volunteerism, this means that a person who takes the moral factors of participating in community service is more likely to be genuinely involved and engaged with volunteering. The purpose behind this experiment was to find a correlation between deliberation, critical thinking and students’ engagement in volunteering at a nursing home (Lin, et al). The purpose of this experiment was to find and analyze the trends relating to the variables involving a college student’s engagement in volunteering (Lin, et al). The results was comprised of the responses of college students to the survey questionnaire (Lin, et al). The survey consisted of questions concerning the respondent’s deliberative beliefs and critical thinking where the possible responses ranged on a rating scale on whether the responder strongly agreed or strongly disagreed with the question (Lin, et al). The results of the survey supported Aristotle’s theory of deliberation with that fact that the college students’ responses held a positive correlation of their deliberative beliefs to critical thinking as well as a positive correlation of deliberative beliefs to engagement in volunteering at a nursing home (Lin, et al).

Losing the younger generation’s involvement in Relay for Life, and volunteering in the community in general, will havecause a detrimental effect on society. The ideas sparked from young minds is what helps organizations like Relay for Life to continue and thrive (Rich). Without the relatable ideas, not to mention the parental support that comes comes with youth involvement, events will struggle if success cannot come from ideas already used in the past (Burton). Furthermore, Rich points out that early involvement in organizations like Relay for Life help, “Youth participants… [learn] the importance of giving back, something that will help shape and mold them for the reminder of their lives. Being involved as a youth also helps to build the future event leaders,” (Rich). The younger generation is the future of everything, not just volunteer organizations.

However, just because this may seem to be a problem locally or concentrated in the United States, it does not mean it is a problem elsewhere (Hustinx). For example, a the Canadian Journal of Sociology published an article that compared the perspectives of volunteerism in western countries, like Canada, and eastern countries like China (Hustinx). The article confirms that in Chinese culture, it is expected that all citizens participate in the giving back to the community, while in Canada, volunteering is a free choice, but much more widely practiced voluntarily in comparison to the United States (Hustinx). Furthermore, as seen in athe study published by the College Student Journal that analyzes the factors that motivate college students to volunteer, there are many factors that influence students’ choices to volunteer (Moore). Additionally, in a different survey-based study published by the College Student Journal, the quality of work done by three different groups of college students was tested (Omori). The groups being, students who voluntarily participated in survey-taking, students who received extra-credit for completing a survey, and students who were required to volunteer on an hourly basis (Omori). The purpose of this study was to discover if there was a correlation between the number of surveys taken (and not taken) within each type of student groups (Omori). After data was collected and analyzed, no significant difference was found between each student group and the number of surveys taken (and not taken) (Omori). This means, the quality of surveys, and work done through any activity, will allow for effective research, and technically produce a positive impact regardless of voluntary action, required action, or a given incentive, will reach participants effectively (Omori).

Nonetheless, it is still possible for the problem observed with youth volunteering today in the Chesterfield community to be observed in communities nationwide, or even worldwide (Hustinx). Without students’ consideration of the moral development and reasoning for participating in volunteering, society’s future leaders are in civic jeopardy (Lin; Longo; Rich). The point is the younger generation has lost sight in the value of performing community service (Moore, et al). It’s more than just service hours and protects – it is passion and the desire to give back and make difference – to leave an everlasting legacy (Rich).

Importance of Volunteerism Among Students. (2021, Apr 21). Retrieved from https://papersowl.com/examples/importance-of-volunteerism-among-students/

The Importance of Helmets for UF Students

Our Students are being Forgotton the Importance of LGBTQ Sexuality Education

Advantages and Disadvantages of Community Service