Social Conditions of British-India and the US 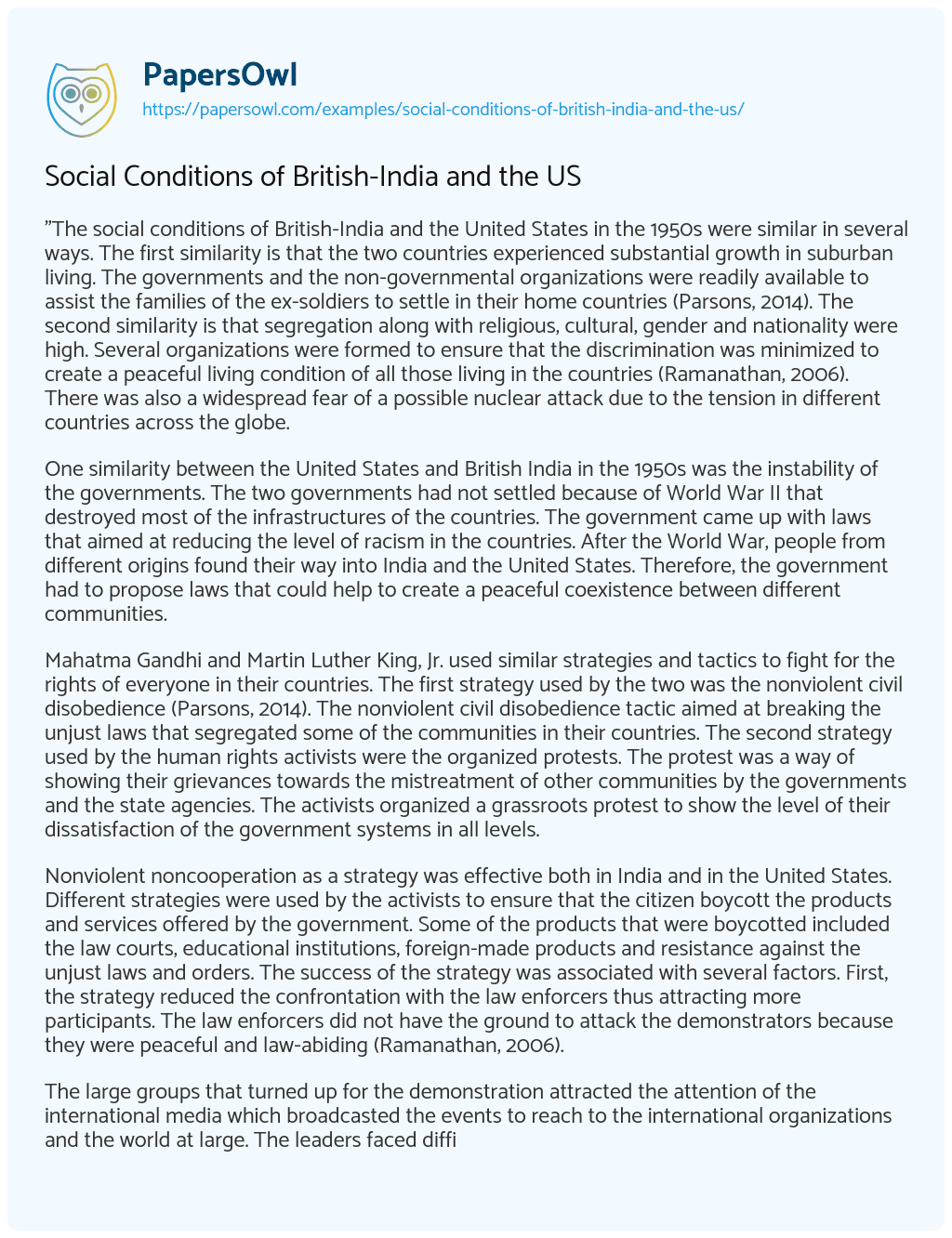 “The social conditions of British-India and the United States in the 1950s were similar in several ways. The first similarity is that the two countries experienced substantial growth in suburban living. The governments and the non-governmental organizations were readily available to assist the families of the ex-soldiers to settle in their home countries (Parsons, 2014). The second similarity is that segregation along with religious, cultural, gender and nationality were high. Several organizations were formed to ensure that the discrimination was minimized to create a peaceful living condition of all those living in the countries (Ramanathan, 2006). There was also a widespread fear of a possible nuclear attack due to the tension in different countries across the globe.

One similarity between the United States and British India in the 1950s was the instability of the governments. The two governments had not settled because of World War II that destroyed most of the infrastructures of the countries. The government came up with laws that aimed at reducing the level of racism in the countries. After the World War, people from different origins found their way into India and the United States. Therefore, the government had to propose laws that could help to create a peaceful coexistence between different communities.

Mahatma Gandhi and Martin Luther King, Jr. used similar strategies and tactics to fight for the rights of everyone in their countries. The first strategy used by the two was the nonviolent civil disobedience (Parsons, 2014). The nonviolent civil disobedience tactic aimed at breaking the unjust laws that segregated some of the communities in their countries. The second strategy used by the human rights activists were the organized protests. The protest was a way of showing their grievances towards the mistreatment of other communities by the governments and the state agencies. The activists organized a grassroots protest to show the level of their dissatisfaction of the government systems in all levels.

Nonviolent noncooperation as a strategy was effective both in India and in the United States. Different strategies were used by the activists to ensure that the citizen boycott the products and services offered by the government. Some of the products that were boycotted included the law courts, educational institutions, foreign-made products and resistance against the unjust laws and orders. The success of the strategy was associated with several factors. First, the strategy reduced the confrontation with the law enforcers thus attracting more participants. The law enforcers did not have the ground to attack the demonstrators because they were peaceful and law-abiding (Ramanathan, 2006).

The large groups that turned up for the demonstration attracted the attention of the international media which broadcasted the events to reach to the international organizations and the world at large. The leaders faced difficulties in running the governments because of the non-cooperation by the citizens. The governments could not raise enough revenue to meet their daily expense, and some of the employees also participated in the non-violent non-cooperation thus paralyzing the operations of the governments (Parsons, 2014).

When there is mistreatment of a community or communities in the country, the human rights activities are justified to use non-violent non-cooperation to bring the government to listen to the plight of the citizens. Non-violent non-cooperation is ethical due to several reasons. The use of non-violent non-cooperation can be justified because it protects the lives of all the participants. The people who participate in the movement cannot be attacked or prevented by the law enforcers because they do not break the laws that create peaceful coexistence of people in society. Secondly, the strategy involves the willing citizens without interfering with the activities of the people who are not willing to participate (Parsons, 2014).

Social Conditions of British-India and the US. (2021, Apr 21). Retrieved from https://papersowl.com/examples/social-conditions-of-british-india-and-the-us/

Under what Conditions is Protest Effective?