Law Enforcement and Relationship with Americans 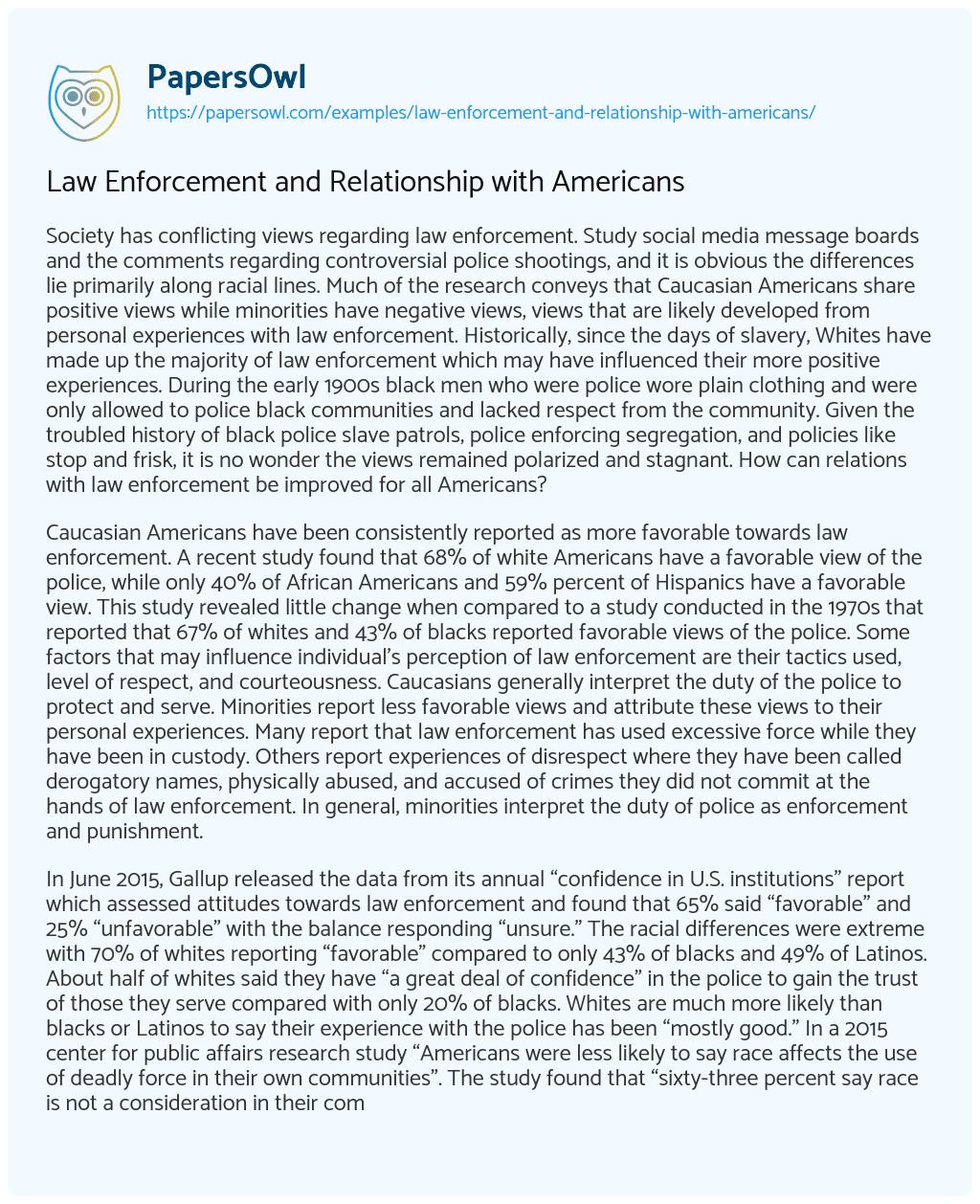 Society has conflicting views regarding law enforcement. Study social media message boards and the comments regarding controversial police shootings, and it is obvious the differences lie primarily along racial lines. Much of the research conveys that Caucasian Americans share positive views while minorities have negative views, views that are likely developed from personal experiences with law enforcement. Historically, since the days of slavery, Whites have made up the majority of law enforcement which may have influenced their more positive experiences. During the early 1900s black men who were police wore plain clothing and were only allowed to police black communities and lacked respect from the community. Given the troubled history of black police slave patrols, police enforcing segregation, and policies like stop and frisk, it is no wonder the views remained polarized and stagnant. How can relations with law enforcement be improved for all Americans?

Caucasian Americans have been consistently reported as more favorable towards law enforcement. A recent study found that 68% of white Americans have a favorable view of the police, while only 40% of African Americans and 59% percent of Hispanics have a favorable view. This study revealed little change when compared to a study conducted in the 1970s that reported that 67% of whites and 43% of blacks reported favorable views of the police. Some factors that may influence individual’s perception of law enforcement are their tactics used, level of respect, and courteousness. Caucasians generally interpret the duty of the police to protect and serve. Minorities report less favorable views and attribute these views to their personal experiences. Many report that law enforcement has used excessive force while they have been in custody. Others report experiences of disrespect where they have been called derogatory names, physically abused, and accused of crimes they did not commit at the hands of law enforcement. In general, minorities interpret the duty of police as enforcement and punishment.

In June 2015, Gallup released the data from its annual “confidence in U.S. institutions” report which assessed attitudes towards law enforcement and found that 65% said “favorable” and 25% “unfavorable” with the balance responding “unsure.” The racial differences were extreme with 70% of whites reporting “favorable” compared to only 43% of blacks and 49% of Latinos. About half of whites said they have “a great deal of confidence” in the police to gain the trust of those they serve compared with only 20% of blacks. Whites are much more likely than blacks or Latinos to say their experience with the police has been “mostly good.” In a 2015 center for public affairs research study “Americans were less likely to say race affects the use of deadly force in their own communities”. The study found that “sixty-three percent say race is not a consideration in their community, while thirty-four percent say police are more likely to use deadly force against a black person, and one percent against a white person”.

Consequently, minorities reported having to have detailed discussions with their children regarding how to handle situations when law enforcement is involved such as routine traffic stops. Gallup further reported that 74% of Blacks and 40% of Hispanics had warned their children to be careful when dealing with the police in comparison to only 32% of Whites. Dozens of high profile murders of unarmed black people have sparked the attention of all Americans, as well as international outcry. This attention has caused Americans to further explore the reasons such disparities exist with the handling of Whites in comparison to minorities.

One reason may be attributed to the history of America and systematic slavery. History may have a role in the way law enforcement deals with whites compared to minorities. From the beginning America was claimed to be built on principals of freedom and equality, yet supported enslavement of people. Slave owners were primarily whites and enslaved Africans were owned as property and forced to work the land. They had no civil rights they were raped, beaten, separated from their families and sold like cattle to other slave owners. This continued for centuries and was followed up by Jim Crow policies, also enforced by police. The practice ultimately devalued African Americans and may play a role in the way they are handled by law enforcement.

We cannot change the past however we must learn from the past and use the information we’ve learned to improve relations for African Americans as it relates to law enforcement. There must be a collective effort to educate law enforcement in an effort to improve their cultural sensitivity to all minorities. Law enforcement must see race, understand history, recognize their implicit bias, and understand how it manifests in the treatment of minorities. Many movements have been started in the last five years to improve awareness of the inequality minorities face at the hands of law enforcement. One in particular is the Black Lives Matter movement. Black Lives Matter is an “international activist movement, originating in the African-American community that campaigns against violence and systemic racism towards black people.” Improving the understanding and value America has on African American and other minority lives can improve the way law enforcement handles them. Statistics speak to the fact that improvement is necessary in the way law enforcement handles minorities.

America as a whole realizes the need for change. “Policing in the United States is unique in that it is neither centralized, as is the case in many countries, nor does it fall under the direct control of the Federal Government. Each of the approximately 18,000 local, state, and tribal law enforcement agencies in the nation falls under the control of a local governing body, executive, or elected official(s)”. The lack of uniform control is one of the key characteristics that makes the American policing system challenging. It is also the characteristic that impedes the establishment of standardized ethical and professional practices within a system few deny is in need of reform. In order to obtain real sustainable reform in law enforcement, the focus must shift from the individual police to the policing system. Through the reform process the roles and responsibilities of the police and of the community must be clear.

One study reported that the majority (60%) of Americans say they oppose racial profiling by the police and support a ban on the practice. While the majorities of all groups (62% of whites, 71% of blacks, and 67% percent of Latinos) agree that ‘policies and system-wide training programs should be put in place to prevent’ racial profiling. “Large majorities of both blacks and whites (92% and 86% respectively) support the use of outside prosecutors in cases of police killings of unarmed civilians.” Over 80% of blacks and whites believe the public should be allowed to videotape the police, while over 90% of both blacks and whites favor requiring on-duty police officers to wear video cameras “which would record events and actions as they occur.”77

The improvement must be a comprehensive approach that includes diversity training, police reform, as well as community involvement. Diversity training has to help law enforcement to apply empathy and to see through the eyes of minorities. This approach will help them be more sensitive to the way they handle minorities. They may not be aware of the previous negative experiences minorities have endured. The training must examine stereotypes and cultural assumptions held by the community and by the law enforcement professionals who serve the community. It must seek to understand cultural differences, to increase awareness of attitudes and behaviors, and to appreciate the commonalities that exist amongst the community and law enforcement. Lastly, it must create a situation that will reinforce the concept of team building and transform knowledge gained into usable skills for serving a diverse community.

Police reform can be achieved by retraining officers the correct way to use force, the proper way to deescalate potentially dangerous situations, and the appropriate use of body cameras. Officers should understand their individual police forces policy regarding the use of force and have a clear understanding of which situations are appropriate for the use force. As well as the appropriate policy for using their body cameras and that the inappropriate use of the body cameras can lead to immediate termination. A camera can protect both the officer and the person or persons being apprehended. Following routine procedure in a respectful uniform approach to all people will help standardize the treatment all Americans should receive during routine stops. Having community meetings, and neighborhood events can bridge the gaps between citizens and law enforcement through these platforms they will be able to establish mutually trusting relationships. Organized community precincts where officers live and work in their neighborhoods further facilitates relationships. Research suggest people are more comfortable with people they know versus a stranger and law enforcement is no different. Additionally, the public including minorities should be aware of routine police protocol therefore improving their knowledge and expectations of what unbiased law enforcement should look like. These are all steps to provide transparency to the community and to reestablish trusting relationships between law enforcement and the communities they serve.

Law Enforcement and Relationship with Americans. (2021, Apr 21). Retrieved from https://papersowl.com/examples/law-enforcement-and-relationship-with-americans/

US Police Brutality and African Americans