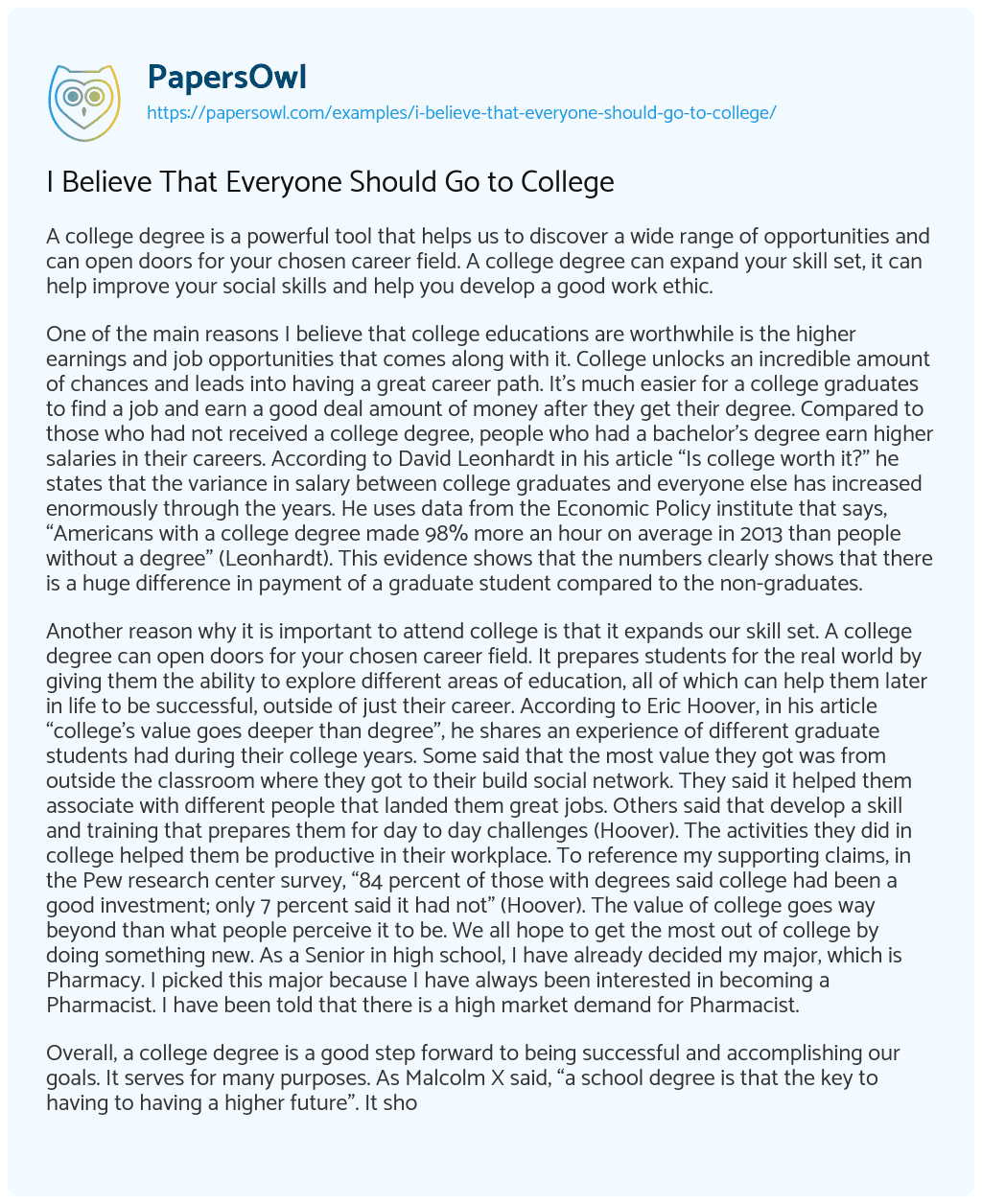 A college degree is a powerful tool that helps us to discover a wide range of opportunities and can open doors for your chosen career field. A college degree can expand your skill set, it can help improve your social skills and help you develop a good work ethic.

One of the main reasons I believe that college educations are worthwhile is the higher earnings and job opportunities that comes along with it. College unlocks an incredible amount of chances and leads into having a great career path. It’s much easier for a college graduates to find a job and earn a good deal amount of money after they get their degree. Compared to those who had not received a college degree, people who had a bachelor’s degree earn higher salaries in their careers. According to David Leonhardt in his article “Is college worth it?” he states that the variance in salary between college graduates and everyone else has increased enormously through the years. He uses data from the Economic Policy institute that says, “Americans with a college degree made 98% more an hour on average in 2013 than people without a degree” (Leonhardt). This evidence shows that the numbers clearly shows that there is a huge difference in payment of a graduate student compared to the non-graduates.

Another reason why it is important to attend college is that it expands our skill set. A college degree can open doors for your chosen career field. It prepares students for the real world by giving them the ability to explore different areas of education, all of which can help them later in life to be successful, outside of just their career. According to Eric Hoover, in his article “college’s value goes deeper than degree”, he shares an experience of different graduate students had during their college years. Some said that the most value they got was from outside the classroom where they got to their build social network. They said it helped them associate with different people that landed them great jobs. Others said that develop a skill and training that prepares them for day to day challenges (Hoover). The activities they did in college helped them be productive in their workplace. To reference my supporting claims, in the Pew research center survey, “84 percent of those with degrees said college had been a good investment; only 7 percent said it had not” (Hoover). The value of college goes way beyond than what people perceive it to be. We all hope to get the most out of college by doing something new. As a Senior in high school, I have already decided my major, which is Pharmacy. I picked this major because I have always been interested in becoming a Pharmacist. I have been told that there is a high market demand for Pharmacist.

Overall, a college degree is a good step forward to being successful and accomplishing our goals. It serves for many purposes. As Malcolm X said, “a school degree is that the key to having to having a higher future”. It shows to the employer what college educated students do while spending their four years there. College students participate in clubs, internships, and jobs where they can enhance their communications skills. They take a variety of courses to challenge themselves and select the major that they are interested in. They know how to make their time and money worth spending in college by writing as much as they can, doing something different and taking responsibilities. Not only do I want to make my parents proud of my accomplishments after college, but I want to prove to myself how much I have changed as I step into my career by demonstrating my skills in my workplace.

I Believe That Everyone Should Go to College. (2019, Aug 17). Retrieved from https://papersowl.com/examples/i-believe-that-everyone-should-go-to-college/